About eight or 10 years ago, back when Alber Elbaz, the Moroccan-born Israeli designer who died on Saturday in Paris at age 59, was still happily ensconced as creative director of Lanvin, I bought a runway sample from the label. It was a gold flapper-like dress I adored, but it was entirely out of my price range unless I bought it used.

Because it was a sample, the dress had made the rounds of various magazine photo shoots for a season, and only when it was no longer needed, did I get to take possession. I remember the excitement of receiving the package and unfolding the dress, and the surprise, when I went to try it on, of discovering that inside, just under the label, Mr. Elbaz had attached another tag, made out of a piece of embroidered grosgrain. It read: “For Vanessa, Love Alber.”

Every time I wear the dress, and I still do, that makes me smile. It was the littlest thing — just a scrap of ribbon with four words on it — but also a very big thing. It wasn’t for anyone’s eyes but my own. As a gesture, it was quintessentially Alber.

And it is an example of why, ever since his death was announced, the memorials and encomiums that have filled social media and the news have cited his professional achievements, sure — that he was trained by Geoffrey Beene, handpicked by Yves Saint Laurent as his heir, revived Lanvin and for more than a decade made it one of the most desirable brands in Paris, had just started a new, Richemont-backed label — but also so often included the word “friend.” 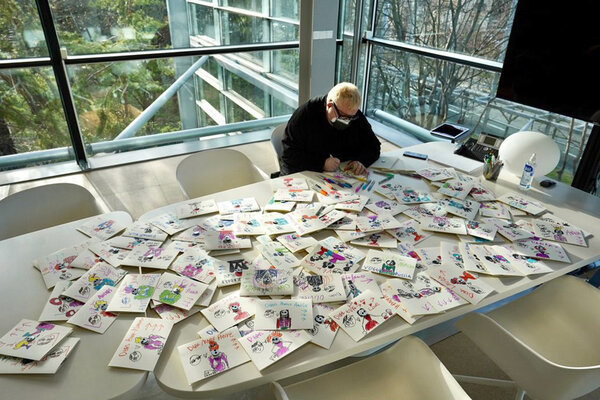 “Heartbroken by the news of the passing of my dear friend Alber,” Maria Grazia Chiuri, the artistic director of Dior women’s wear, wrote on Instagram. “He was the first person who made me feel at home in the fashion industry.”

“I am deeply saddened to learn the news that my dear friend Alber Elbaz passed away,” Bianca Jagger wrote.

He was, said Ralph Toledano, the president of the Fédération de la Haute Couture et de la Mode, “my brother by heart.”

In an industry characterized by competition, often seduced by divas and generally fond of diktats, where irony is considered chic, golden cages are common and beauty associated with sacrifice, Mr. Elbaz hewed to a different line.

He thought, deeply, about the people around him. He paid attention. Not just to famous people, though famous people loved him, mostly because he treated them like people (and also made them look really good without making them feel desperate for Spanx). But to all of the women he dressed and the people with whom he worked.

He didn’t have much time for cynicism. He did have time for loyalty. Perhaps that is why, during the periods he was out of fashion work — the years between Saint Laurent and Lanvin, and between Lanvin and his new gig, AZ Factory — he was never really out of fashion.

It wasn’t that he was known for his homes or his art collection or his dinner parties. (His dinner parties involved ordering Champagne and salmon from Caviar Kaspia for everyone at the office after keeping his staff working past midnight as he deconstructed and reconstructed their proposals for store windows.)

He was known for sending flowers to every member of the Lanvin atelier after every show to thank them, as well as sending bouquets to other designers. For remembering the names of the spouses, children and parents of pretty much everyone he met — and asking about them.

For the fact that almost everyone has an Alber story.

The jewelry designer Elie Top, for example, remembered getting a call from Mr. Elbaz, who was sitting with the architect and interior designer India Mahdavi, who happened to be wearing a big costume necklace by Mr. Top that she had borrowed for some special events. Mr. Elbaz thought it looked so wonderful that he should buy it for her as a gift.

Another time Ikram Goldman, the Chicago retailer who had championed Mr. Elbaz’s work, was in Marrakesh with her husband and 5-year-old twin sons, and ran into Mr. Elbaz in the lobby of their hotel. For the next week, every morning, he brought her breakfast bouquets of mint and basil from the market. When the mother of Lisa Airan, a doctor and one of Mr. Elbaz’s clients, died unexpectedly earlier this year, he planted trees in Israel in her honor.

He deliberately didn’t name his new brand after himself, which would been the easy, logical thing to do. (He was pretty well known by then, after all.) He called it AZ Factory, not because he was worried about losing his name if it didn’t work out with his backer, but because he wanted to make it clear that he didn’t think it was about him. Then, before its debut in January, he drew by hand about 170 notes for each member of his staff and the news media to thank them and let them know it was coming.

He would often say that though fashion people had a reputation of being cold or being scary, they were actually some of the nicest people he knew. But that may have been because Mr. Elbaz himself was so unguarded about his own insecurities and emotions that he made those around him nicer. As he made his clothes.

“Nice” being one of those qualities not generally so valued in fashion.

They didn’t constrict or complicate. As someone who was unhappy with his own body for most of his life, he wasn’t going to force physical neuroses on anyone. They didn’t demand a certain attitude to wear or require accommodations because they were so dramatically structured they didn’t fit through a door. They eased into your life, solved some problems and made it better.

As Meryl Streep said when she introduced Mr. Elbaz at the Fashion Group International Night of Stars in 2015: “You don’t have the sense that the dress can stand up without you. It needs you as much as you need it.”

His dresses, she said, “are the only ones that when I wear them, I feel like myself, or even a better version of her. On the important occasions when it becomes necessary for me to be ‘Meryl Streep,’ that outsize, overpraised monument to the changing status of women in the cinema and the world, that’s when I need Alber the most. He is undaunted by all of it: my insecurities, my weight — which is 150! — my height and my age. He just makes me feel lovely.”

In case she ever forgets, there’s probably a hand-sewn tag inside some of her dresses to remind her.