One of the more unexpected side effects of the pandemic was to forever alter our relationships with personal protective equipment; to make medical garments, at least in the mask sense, a new accessory of self-expression and a part of almost every wardrobe. And every designer’s arsenal.

Now that relationship is entering a new phase. Josie Natori, a designer known for her loungewear and lingerie, is joining forces with Care+Wear, the “healthwear” company known for its fashion approach to PICC line covers and clothing with port access, to introduce a line of scrubs modeled on her best-selling pajamas.

Ms. Natori is the latest entrant in a growing effort to reposition what may be one of the largest, and most overlooked, professional sectors as the Next Great Fashion Frontier.

Last month, for example, FIGS, the scrubs brand introduced in 2013 and pitched as the Lululemon of medical clothing, went public with shares selling well above the anticipated range and a valuation of approximately $4.5 billion. Jaanuu, founded the same year and known for scrubs that include gold zippers, peplums and names like the “princess top,” is reportedly also considering an IPO.

And those are just the dominant names in a competitive pool that includes Koi, the scrubs “wellness” brand (which also teamed up with Betsy Johnson for some patterned scrubs), WonderWink and Grey’s Anatomy (well, of course). 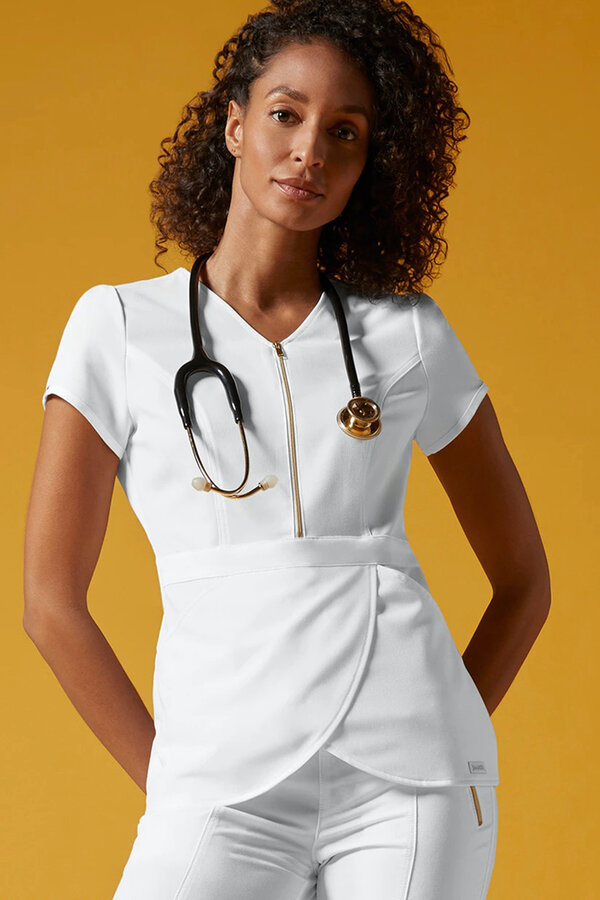 According to Fortune Business Insights, the global market for medical clothing, of which scrubs and surgical gowns are the largest segment, was $86.15 billion in 2020 and is expected to reach $140 billion by 2028. At the same time, the U.S. Bureau of Labor Statistics reports that health care-related jobs were expected to grow by 15 percent from 2019 to 2029, adding 2.4 million new jobs, or “more jobs than any of the other occupational groups.”

All of them need clothes for work.

And though some doctors had been moving away from scrubs before the pandemic, the last year has made them even more important.

“It’s the one way that everyone in the hospital can express themselves,” said Chaitenya Razdan, the founder of Care+Wear, which he started in 2014 on the premise that people dealing with medical issues should feel like people, not patients. And part of that is dressing like an individual.

“When you think about how we express ourselves when we go into work, it’s crazy that nurses and doctors haven’t historically been given that opportunity,” Mr. Razdan said. As dress codes are being re-evaluated everywhere, including at financial institutions and schools, why should medical workers be exempt?

This is especially so given the way the pandemic thrust health care workers into the center of the cultural conversation, transforming them into heroes —- and given the rise of athleisure, which extended the designer purview into the realm of stretchy, comfort clothing. It is not a great conceptual leap to believing that scrubs, which lie somewhere between pajamas and performance clothes, deserve the same treatment.

A Brief History of Scrubs

Scrubs, which take their name from the fact they are worn in a scrubbed environment, according to a history of operating room attire from the American College of Surgeons, were first mentioned by a surgeon in 1894. But they did not come into widespread use in hospitals until the 1940s. (Doctors used to just put aprons over their suits.) Initially made in white, scrubs morphed into their familiar green because under bright lights the white blended in with the white of most operating rooms.

Traditionally, most scrubs for medical personal were provided by hospitals and medical programs and hence defaulted to a common denominator: unisex, shapeless enough to fit pretty much any body and strong enough to withstand industrial laundries.

Dr. Donald Macdonald, an ophthalmologist and oculoplastic and reconstructive eye surgeon with Riverview Medical Center in New Jersey, said he began wearing scrubs in medical school (he graduated in 1980), and since then, no matter where he has been in the world, “they are all the same.”

While hospitals still provide operating room scrubs, it is increasingly left to individuals to purchase their own uniforms. This means that while large uniform outfitters like Dickies and Cherokee historically produced the unisex cotton scrubs used by hospitals (which tend to be less expensive and bought in bulk), the door has opened for direct-to-consumer start-ups looking to disrupt the market. The surgeons’ group issued its first “Statement on Operating Room Attire” in 2016.

Outpatient facilities like plastic surgery offices and dental clinics led with fashion scrubs, but now they have filtered down to the general medical population.

“People have started to collect them,” said Marina Hartnick, 25, who is in her in last semester of nursing school at the MGH Institute of Health Professions in Boston, and who is partial to the FIGS skinny scrubs. Though Massachusetts General has scrubs that operating room personnel can use, Ms. Hartnick said she rarely saw anyone taking advantage of them. Most employees want to wear their own.

Kim Zafra, 29, an acute care nurse practitioner at Mount Sinai in New York and one of the test subjects for Care+Wear x N Natori, owns between 10 and 15 pairs. But until recently, she said: “I never thought of them as something that could make you feel good in the workplace. It’s weird we are just realizing this.”

Ms. Natori, who said she has “at least 20 uncles, aunts and cousins who are doctors and nurses,” met Mr. Razdan in early 2020 through an initiative called Fashion for the Front Lines, which was created to enlist the retail world in sourcing, making and distributing P.P.E. during Covid. They started discussing the possibility of scrubs.

“We talk a lot about people having too much: too much stuff, too much clothes, too much choice,” Ms. Natori said. “But that’s not true of the health care worker.”

The fashion developments of scrubs can be hard to ascertain with the naked eye. It’s not as if they are taffeta or come with ruffles or have different hemlines. And most hospitals have rules about colors, which are used to denote floors and specialties, so suddenly showing up in leopard print or awning stripes as the mood strikes is not really an option. (When it comes to scrub caps, there are more choices.)

Even within the boundaries of scrub specifications, however, there is wiggle room for design. The challenge is how to balance the desires of the individual with the demands of the institution.

“Fit definitely makes a big difference,” said Ms. Hartnick, the nursing student. It helped bolster confidence “when you are constantly walking into new rooms and meeting new people.” You’re not worrying about pens falling out of pockets or that your top is going to billow open and expose you when you lean over.

The first real breakthrough came with pants, especially jogger-style scrubs, ribbed at the ankles, like sweatpants, which are generally the most popular style. Now pretty much every brand, whether a mass supplier or one of the newer fashion-forward names, offers a jogger as an alternative. There are also slim fits, cargo styles and flared scrubs.

Similarly, the tops have become less boxy, and the fabrications increasingly technical to allow for breathability, moisture wicking and layering.

According to Heather Hasson, the co-chief executive of FIGS, the company offers 13 different styles, including sleeveless scrub tops and a fleece that Ms. Hasson calls the “first jacket to be designed for the indoors.”

As for the Care+Wear x N Natori looks, which is a long-term partnership, there will be two pants styles in the four most common hospital colors for both men and women, plus three shirt options for women and two for men, followed by more drops later in the year. The style is mainly in the details: pockets with zips slightly offset from one another, cuts that dip longer in the back, trapunto stitching at the neck and strategically placed loops for hanging ID tags. Pockets also play a big role so that scrubs can be mixed and matched to allow for up to 20 in one outfit.

When Mr. Macdonald, the ophthalmologist, brought the Natori scrubs to his office so his employees could try them, “they made everyone happy,” he said. He sounded surprised to be discussing designer scrubs. It hadn’t occurred to him that it would make any difference.

Ms. Natori thinks her Fashion Week peers may follow her lead, and extend their purview to medical clothing. “I don’t see why not,” she said. “Fashion is always looking for new markets, and this is a really exciting one.”