As a Hindu pundit, or priest, who focuses on the L.G.B.T.Q. population, Sushma Dwivedi is a rarity in the wedding industry. “It’s close to impossible to find a woman pundit here in the States,” she said. “As far as I know there are less than 10, and none of them cater to the gay and transgender community.”

In 2016, Ms. Dwivedi founded the Purple Pundit Project in New York, which offers various “progressive, inclusive, L.G.B.T.Q.+-friendly” religious services like baby namings, house warmings and business blessings to people who are “straight, gay, having an interracial marriage or just want a female pundit.” So far she has officiated 33 weddings, nearly half of which have been for same-sex couples.

Ms. Dwivedi, 40, also works full time as the vice president for communications and brand marketing at Daily Harvest, a subscription-based organic food company. She grew up in Canada and now lives in Harlem with her husband, Vivek Jindal, 37, the chief investment officer of Kore, a wealth management platform in New York, and their two sons, Ashwin, 5, and Nayan, 3.

In 2013, I was getting married and we were having a classic Indian wedding with 250 people and doing two different events: one at the Hotel Nelligan located in the middle of the Old Port, and the other at the Loft, both in Montreal. My husband’s sibling is trans, and it became glaringly obvious that if they wanted to get married, there wouldn’t be a pundit who would do it. It’s not culturally accepted yet.

That was heartbreaking. How could I be part of something that would deny love to someone? Two months after my wedding, I got ordained online by the Universal Life Church. I knew I wanted to do something, but I wasn’t sure what. I was waiting for the whisper in my head to grow louder.

When did it become louder?

I was at Weill Cornell on the East Side, in May of 2016, about to give birth to my first child. The anesthesiologist was trying to distract me while I was getting an epidural from a resident by saying they were looking for the chaplain because a couple on the same floor as me had gone to get their wedding license and her water broke. They wanted to be married before their baby was born.

I told them if they couldn’t find one, I’m ordained. They didn’t take me seriously. Ten minutes later, a sheepish resident asked if I could officiate. I was a little loopy and couldn’t feel my legs, so they came into my room. One nurse wrote a poem, another made a floral wreath for the bride’s hair, several nurses made a procession.

It was wonderfully sweet. It was amazing to be part of someone’s love story. I felt a new calling. My husband recorded the wedding on his iPhone. That video went viral. 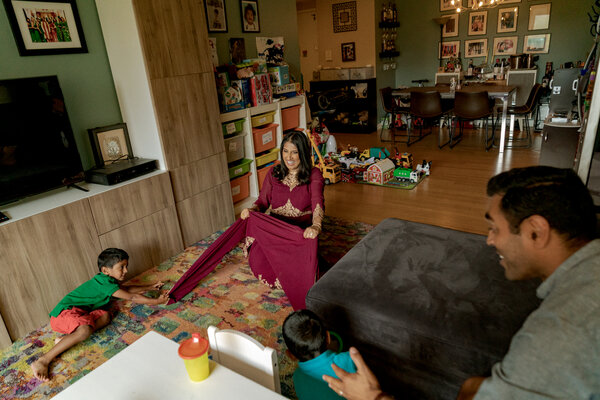 What made you create the Purple Pundit Project?

2016 was election year. The L.G.B.T.Q. community’s rights were being taken away. I had just had my first child. I wanted equality for everyone. Motherhood lit my inner activist’s flame, and it became clearer where I could make a difference. I built a Go Daddy website while on my couch. I wanted a color that represented a spirited minority, which was the South Asian gay community, within a spirited minority, which is the gay community. Purple felt like a good place to lean in.

How is your Hindu service different from a traditional one?

A traditional Hindu ceremony can take two to three hours. Mine is 35 minutes. I begin with a prayer and offering to Lord Ganesha to clear the couple’s paths or obstacles. I have the couple take several laps around a sacred fire; each signifies a commitment they are making.

And I include a passage from the Panchatantra, which is mythological text written in Sanskrit. It asks the couple to commit to a life of equality and partnership. That’s very different from a traditional Hindu reading, which still positions marriage as a patriarchal system where you give away a bride as property.

How has this job changed you?

Before Covid hit, I was doing a Hindu wedding for a straight couple, and a male guest started yelling at me. He said, “Women can’t be pundits, what are you doing here?” It was such a discriminatory approach. It made me realize change and acceptance take time. I’ve learned grace and patience, to take the high road. Being a pundit has liberated and empowered me. I’ve grown into my own skin.

What do you typically wear to perform a Hindu wedding?

I wear a gold ring my grandmother, who is 88, gave me. She’s helped me interpret all of the ceremonies. The ring connects me to her and my roots, yet makes me feel I’m advancing and interpreting new versions of these ceremonies on my own. Then I layer lots of 22-karat gold jewelry: rings, earnings, bracelets and necklaces. Indians love shiny things and they make me feel like a real pundit.

I alternate between two different traditional Hindi outfits: a lehenga, which is a jewel-toned, long sleeved dress with a skirted bottom that is purple and embroidered with gold, so it’s festive for a wedding; or a long tunic and leggings called salwar kameez. It’s also embroidered and more causal. Both outfits are purple. And I’m always barefoot.

What is your favorite moment in the ceremony?

When a couple comes up to me and says, “This was the wedding we always dreamed of but never thought possible to have.”

This interview has been lightly edited for length and clarity.

[Sign up for Love Letter and always get the latest in Modern Love, weddings, and relationships in the news by email.]