LOCKDOWN is the perfect time to to flex those DIY muscles, and the latest trend has seen people making their own water fountains.

Taking to the Facebook group Extreme Couponing & Bargains UK, one mum shared her amazing water feature that cost her just £25 to make. 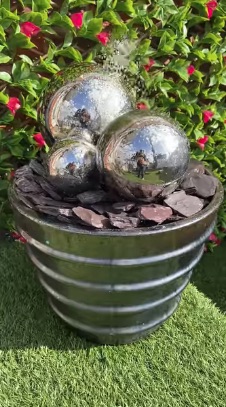 To assemble the fountain she began by placing a plastic pot filled with water inside a larger plant pot.

She then placed a ring of chicken wire around the outside of the plastic pot, and places an off-cut of the chicken wire over the water pot to sit the solar fountain on, which she picked up for £14.99 on Amazon.

She then filled the surrounds with slate so that the top is completely covered before placing three silver balls, costing £9.99 from Home Bargains, on the top.

Once the fountain is switched on the water should just flow over the top of the balls creating an attractive water feature. 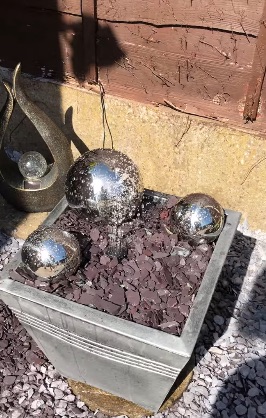 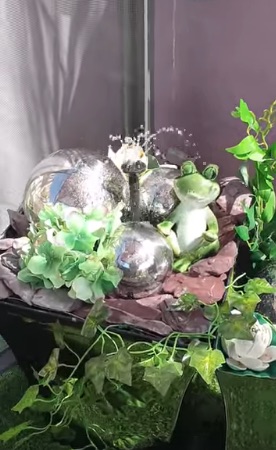 The mum was not the only one to try the trend, with social media flooded with copycat versions of the fountain.

While she already had her slate lying around, others revealed they were able to pick some up for £2.75 at Home Bargains.

Meanwhile others have added some fake foliage and garden ornaments to their fountains to give them a unique twist.

In other DIY news, Stacey Solomon has revealed how to make tealight candles out of shells.

And this mum transformed her downstairs loo into a green paradise for £40 with stick back wallpaper.

Plus this woman gave her boring bathroom a stunning monochrome makeover using £28 stick-on tiles from Dunelm.

Related posts:
Beauty and Fashion
Fiendishly tricky brainteaser asks you to find the odd cushion out – and over half of people won’t be able to solve it
This is Dolly Parton’s biggest anti-aging secret
Frontgate Sale: Take Up to 20% Sitewide + Take Up to 40% Off Furniture
Marni RTW Spring 2021
Don't Poke Yourself On Walter Van Beirendonck's FW20 Grounds Spike Sneaker
Recent Posts
This website uses cookies to improve your user experience and to provide you with advertisements that are relevant to your interests. By continuing to browse the site you are agreeing to our use of cookies.Ok