Politician Allegra Spender is full of surprises. There was her successful surf of the teal wave to victory in the seat of Wentworth in the May federal election, but that might be upstaged by Spender’s favourite outfit from an exhibition devoted to her mother, designer Carla Zampatti, opening at Sydney’s Powerhouse museum tonight.

“In another life, I would like to be the sort of person who wore this one,” Spender says. 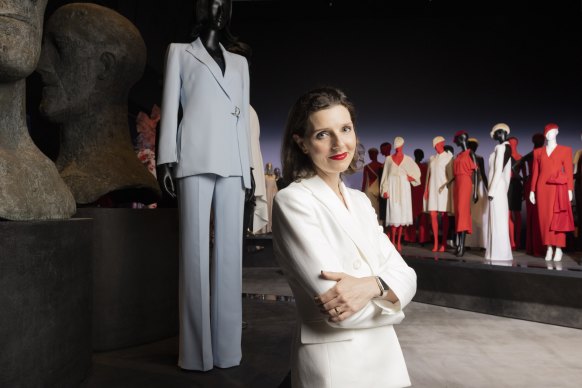 Politician Allegra Spender, federal member for Wentworth, stands by her Carla Zampatti jacket, which she wore on the campaign trail, at an exhibition devoted to her late mother’s designs at the Powerhouse.Credit:Jessica Hromas

Surrounded by the tailored and trimmed work of her mother, who died in April last year, the former managing director of the Carla Zampatti business is keenly aware of life’s singularity. For this life, Spender is comfortable in the not-quite-teal, pale blue suit she wore during her election campaign that is part of the Zampatti Powerhouse exhibition. 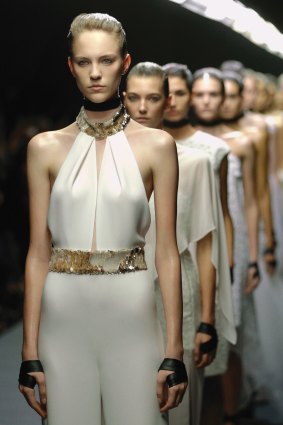 “In another life, I would like to be the sort of person who wore this one,” Allegra Spender says of the Studio 54 jumpsuit, spring-summer 2014.Credit:Image courtesy of the Carla Zampatti archives

“I wore it for my first appearance on Q+A, which was high stakes and very public,” Spender says. “It gave me confidence, which is critical. I felt good in it and wore it on the night of the election.”

Eagle-eyed viewers of Spender on Q+A might have spotted a rare flaw on the jacket’s collar, which gave the wearer even more confidence.

“The jacket was Mum’s,” Spender says. “It reminded me of her and even has the holes from where she wore her Order of Australia.”

In the lead-up to the federal election Spender resigned from her role as a director of the Carla Zampatti business, to prevent it becoming a political target, but she never considered distancing herself from her mother’s legacy.

“Even if I had wanted to, it wouldn’t have made sense to not wear her clothes,” Spender says. “It wouldn’t be authentic. I’m incredibly proud of my mother and what she stood for as a trailblazer.”

Rather than standing out by wearing Carla Zampatti in Parliament House and at official functions, Spender joins a broad group of politicians and powerful women who choose the label as their fully lined armour. Among the 100 designs in Zampatti Powerhouse are pieces worn by former prime minister Julia Gillard, Indigenous Australians Minister Linda Burney and former governor-general Dame Quentin Bryce.

“For many women in business and public life, you could rely on Carla Zampatti for clothing that was dignified and formal,” says Bryce, who spoke at Zampatti’s state funeral.

“In a way I’ve grown up as a woman with Carla’s clothing, as so many Australian women have. I was recently at a concert in Brisbane and saw a friend looking smart and asked the familiar question, ‘Carla?’ Of course, the answer was yes.”

While one of Bryce’s handkerchief skirts appears in the exhibition, it’s a sleek pair of inconspicuous black trousers that are regularly reminders of her close friend.

“All women of different shapes and sizes found a good fit in Carla’s trousers. They’re such reliable old things. Every woman needs a wash and wear workhorse that you can fold at the bottom of a suitcase.”

The Zampatti Powerhouse exhibition, featuring deeply personal stories from many of the people who raided their wardrobes to donate meaningful pieces, offers an unusual opportunity to stop and think about the clothes, which in most cases were designed to be forgotten once the final button was fastened and zip raised.

“Mum always understood how you needed to feel when you were wearing her clothes,” Spender says. “You could look professional and feminine and worry about the issues you were facing. You didn’t need to think about the clothes because you felt confident. Mum had done the work for you.”

Make the most of your health, relationships, fitness and nutrition with our Live Well newsletter. Get it in your inbox every Monday.

Most Viewed in Lifestyle