Michelle Lorenzutti and David Alperin began dating in 2019, but in some ways their love story started much earlier, when their great-grandparents arrived in Brooklyn in the first half of the 20th Century. That history turned out to be key to the connection the couple developed decades later.

Ms. Lorenzutti’s forebears fled persecution in Russia and Poland, while Mr. Alperin’s left Spain to escape the country’s civil war. Both families remained in the borough through the intervening decades, despite its ups and downs and the pressures exerted by gentrification.

When they met that February at Brooklyn Social, a bar in Carroll Gardens, Ms. Lorenzutti and Mr. Alperin had no idea they shared a deep connection to the area. That night, she was uncharacteristically celebrating her birthday alone and he was waiting for a blind date to arrive. She thought she had recognized him from Goose Barnacle, the men’s clothing store he opened on Atlantic Avenue in Brooklyn in 2010, and approached to see if her hunch was correct.

Within minutes of talking, they recognized they had similar backgrounds. On top of being dyed-in-the-wool locals in a city awash with transplants, both also attended the Packer Collegiate Institute in Brooklyn Heights. (Later, they found pictures of Ms. Lorenzutti at Packer’s annual May Day Dance in which Mr. Alperin is visible in the background performing.)

“I told her from the moment we met that I wish I had known, before meeting Michelle, that all I had to do was look for women that were born and raised in Brooklyn,” said Mr. Alperin, 42. “We had the exact same mentality about things, the same sensibility.” 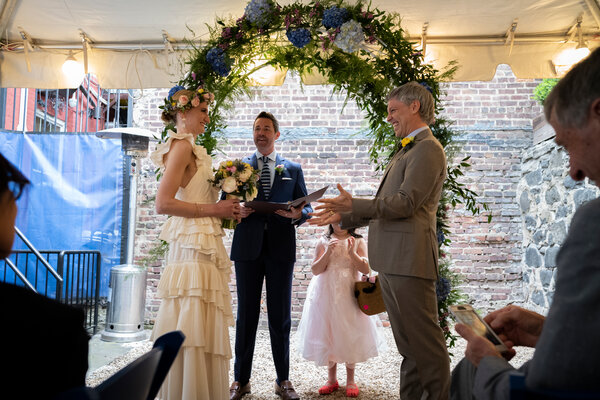 They parted before his date arrived, but exchanged numbers and made plans to get together another night.

Their common outlook encompasses many things, but it’s ultimately grounded in concern for their community. “We have roots here,” said Ms. Lorenzutti, a project manager for the furniture and interior design company Promemoria. “It’s ingrained in me. I care about it so much.”

A year after their first encounter, Mr. Alperin proposed. This development was not unexpected for either of them. “From very early on, we were both really serious about if we got along and if we shared things together and were honest and trustworthy, we would get married,” Ms. Lorenzutti said. The couple celebrated their engagement, and Ms. Lorenzutti’s birthday, with friends and family at Mr. Alperin’s store.

Their joy was disrupted but not dispelled by the arrival of the pandemic weeks later. Mr. Alperin’s business was temporarily closed, and some of the couple’s most important day-to-day activities, like the frequent visits they make to Mr. Alperin’s maternal grandmother, Emma Sullivan, and her two first cousins, were put on hold or changed to comply with quarantine restrictions. (Social calls with older family members were replaced by contactless grocery drop-offs.)

They adapted to the crisis by cooking together at home and playing the card game Brisca. “We decided to pretend to be old fashioned,” Mr. Alperin said. Unlike some New York residents, who left the city to stay with family or at vacation homes, their lives were too firmly entrenched in Brooklyn to consider leaving for any length of time.

In the weeks before Covid-19 reached New York, Ms. Lorenzutti and Mr. Alperin considered having a small wedding at Goose Barnacle, but discarded the idea as impractical. Choosing that path, at the time, would have meant excluding too many of their friends. But when the crisis dragged on, the couple decided to return to their original plan.

They were married April 24 in front of 30 guests at the store. Mr. Alperin’s brother-in-law, John Lowe, who was ordained by the Universal Life Church for the occasion, officiated.