This article is part of our latest Design special report, about homes for multiple generations and new definitions of family.

Not long ago, paying a visit to grandparents in state-supported housing for older adults seemed to satisfy everyone’s emotional needs in the Netherlands and allowed young couples to focus on raising their children and working at their jobs.

Now, with changes in the country’s liberal welfare state and expectations that seniors will remain at home longer, it can be quite a challenge to support aged family members, who might even live on the other side of the country.

This and other socioeconomic developments have contributed to a rising interest in communal living, which can be observed not only in the Netherlands but also around the world.

In February 2020, I began photographing a variety of co-housing projects in the Netherlands and Belgium to explore the benefits and sacrifices of reconfigured lifestyles.

Co-housing helps people cope with the rising cost of living, soothes feelings of loneliness and makes it possible to live sustainably.

And it takes many forms. A group of late-middle-aged people might renovate an old farmhouse in which to grow old together. Or several young families might band together in a rural setting to savor the peace and quiet and reduced expenses. A shared home might be populated by refugees or L.G.B.T.Q. residents. Or a family might return to the traditional mode of merging three or four generations under a single roof and allowing the processes of aging and death to be minutely observed.

Even with the constraints of Covid-19, I have been able to document the day-to-day experiences of these groups, four of which are represented here. 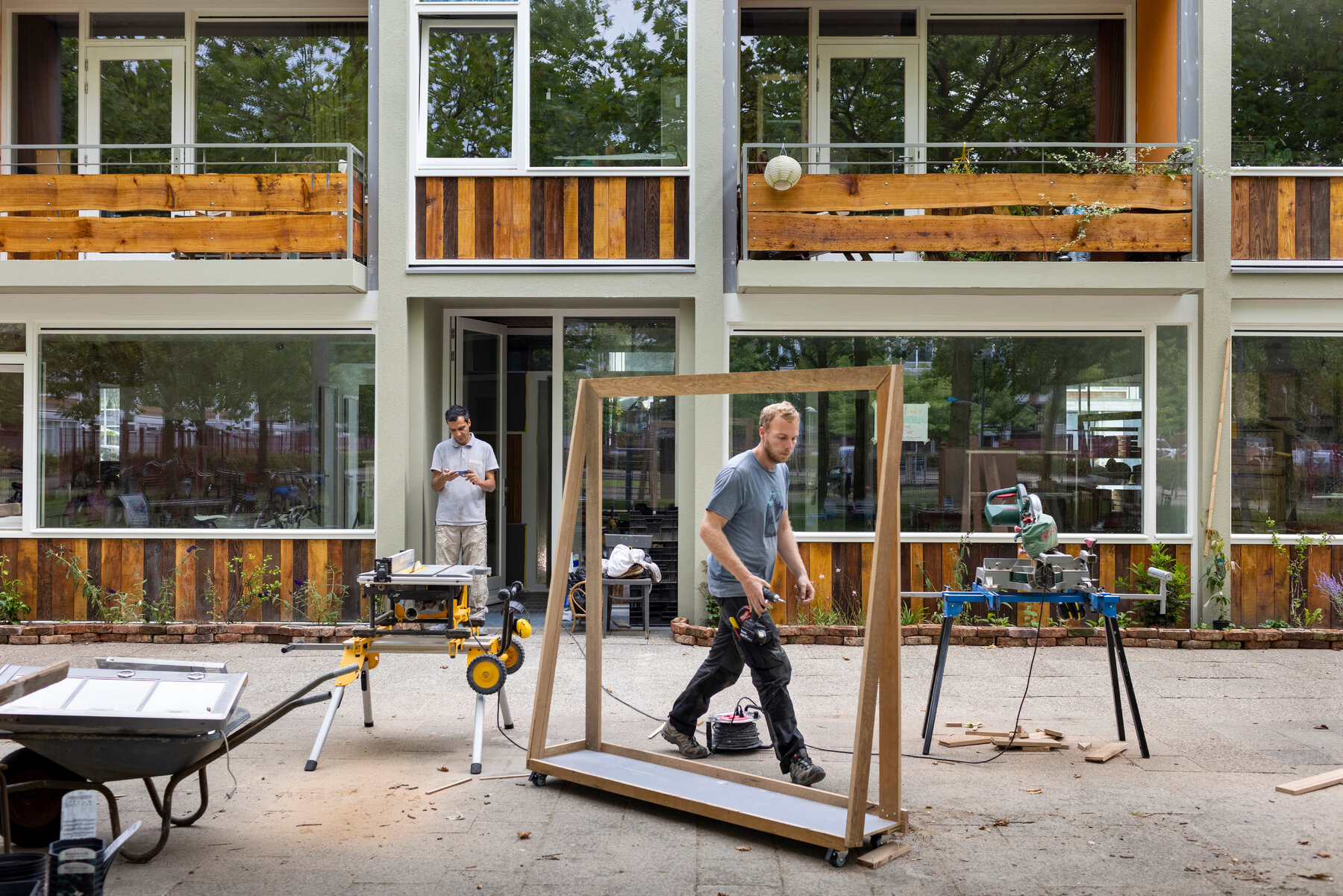 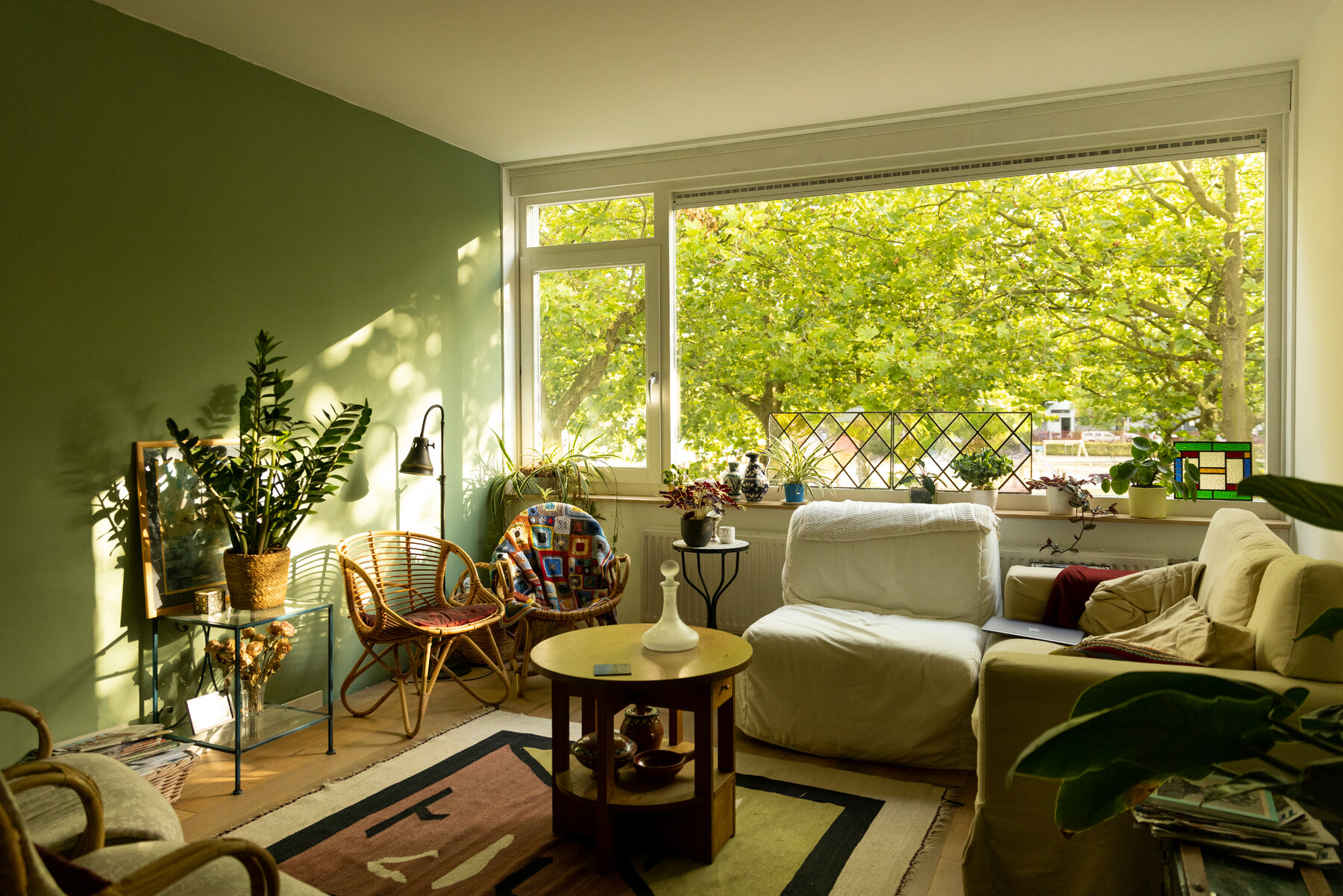 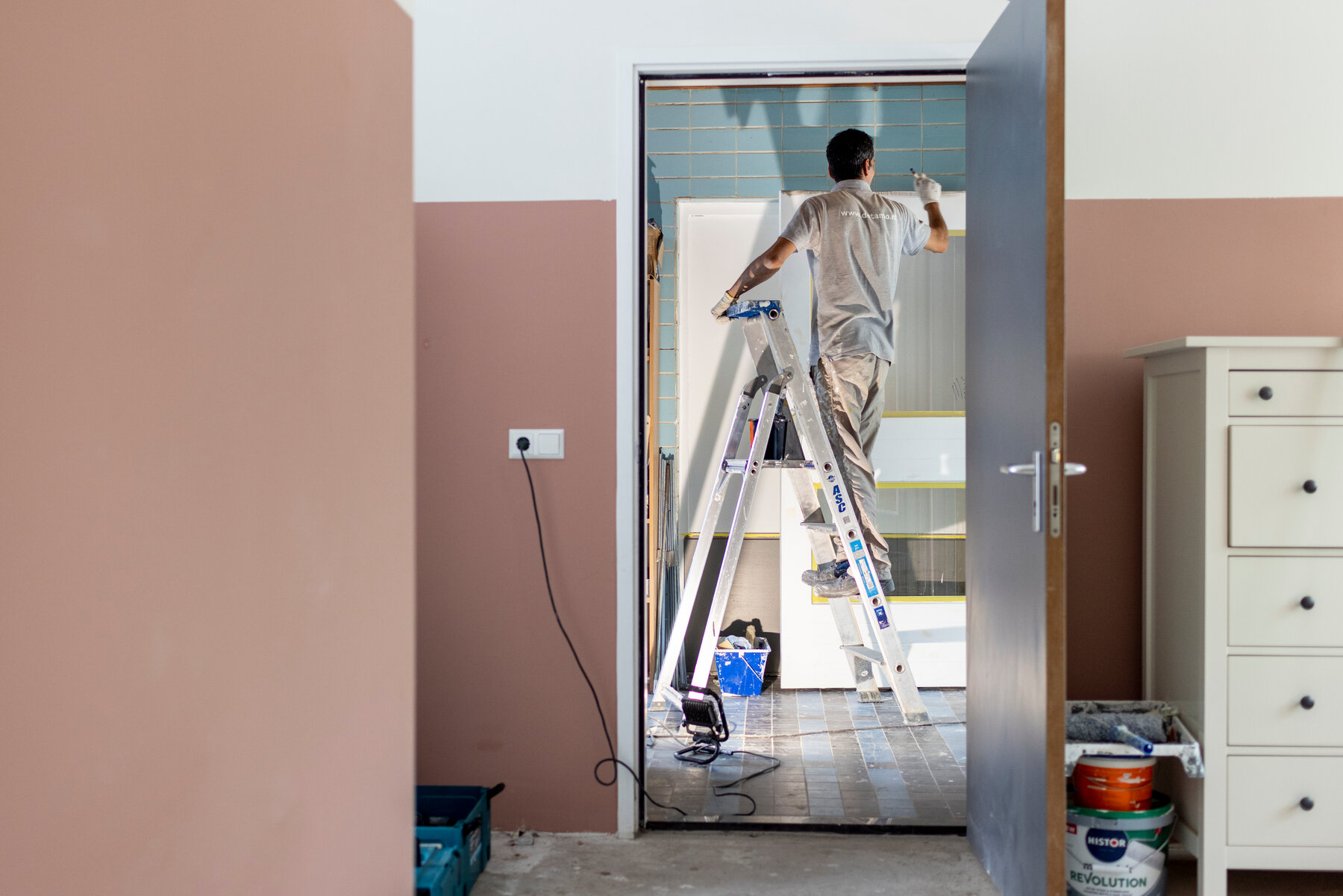 The Overhoop co-housing project is in Overvecht, a multicultural suburb of Utrecht, the Netherlands.

The project accommodates permanent and temporary residents, but every family or individual has a private space, like the quarters of Emma and Willem van der Deijl, who started living there early this year.

Last year, the residents bought the building — a dilapidated apartment block — and are working with volunteers to renovate the ground-floor spaces to house local businesses.

Overhoop is a Christian community, with a core group of three families — including one of Iranian émigrés — and three residents who are single. There are also five guest rooms for visitors, who might be refugees or people who recently divorced and need a place to stay. A communal dinner is served once a week in a shared living room. The building eventually will have a hair salon and a secondhand shop that will provide jobs for people in the neighborhood.

The residents and volunteers include Frank Mulder, a 42-year-old journalist and father of four who is a core member. “With Overhoop, we never had a clear plan,” he told me. “But if you live, love and pray together and invite rich and poor to join, things will grow.” 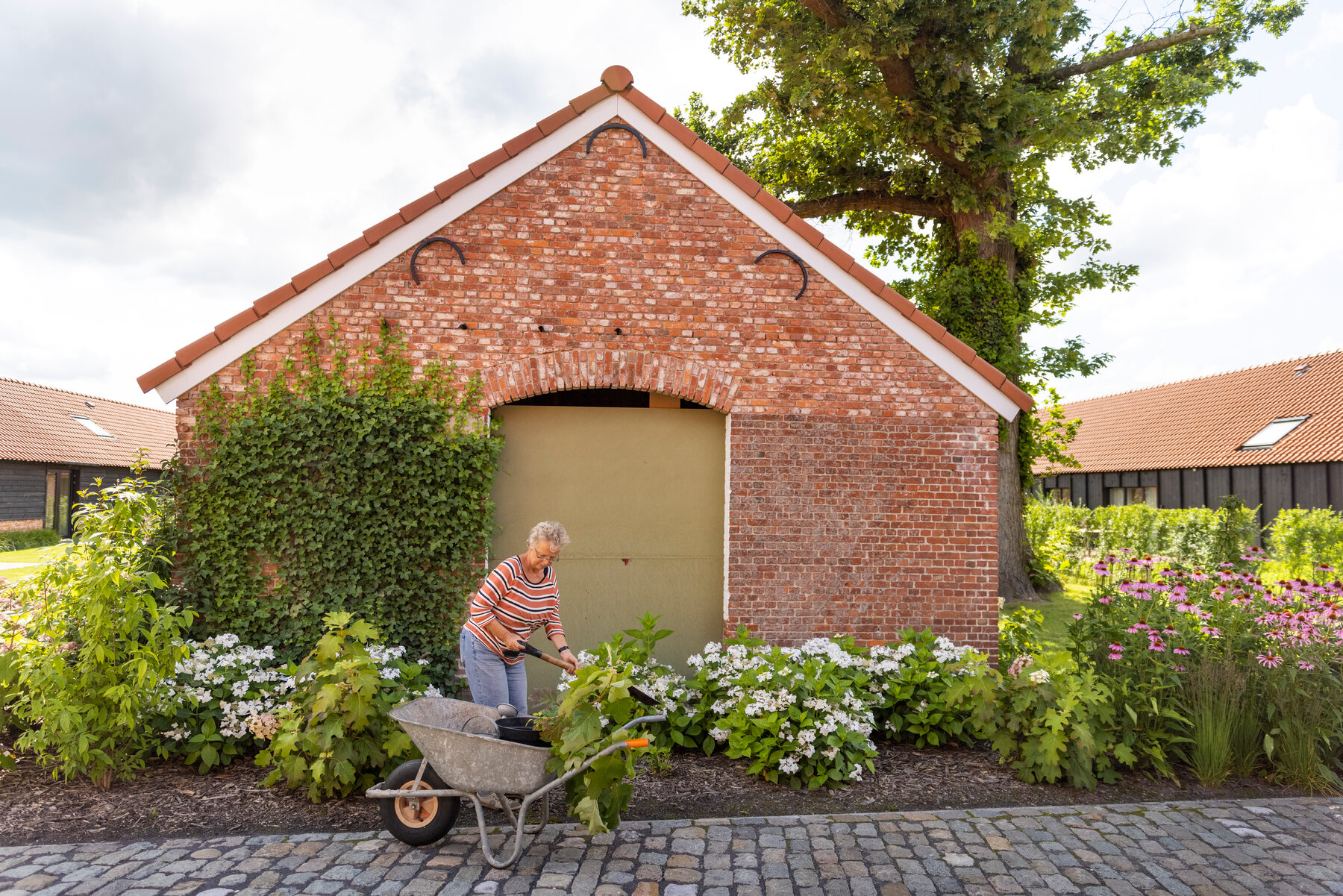 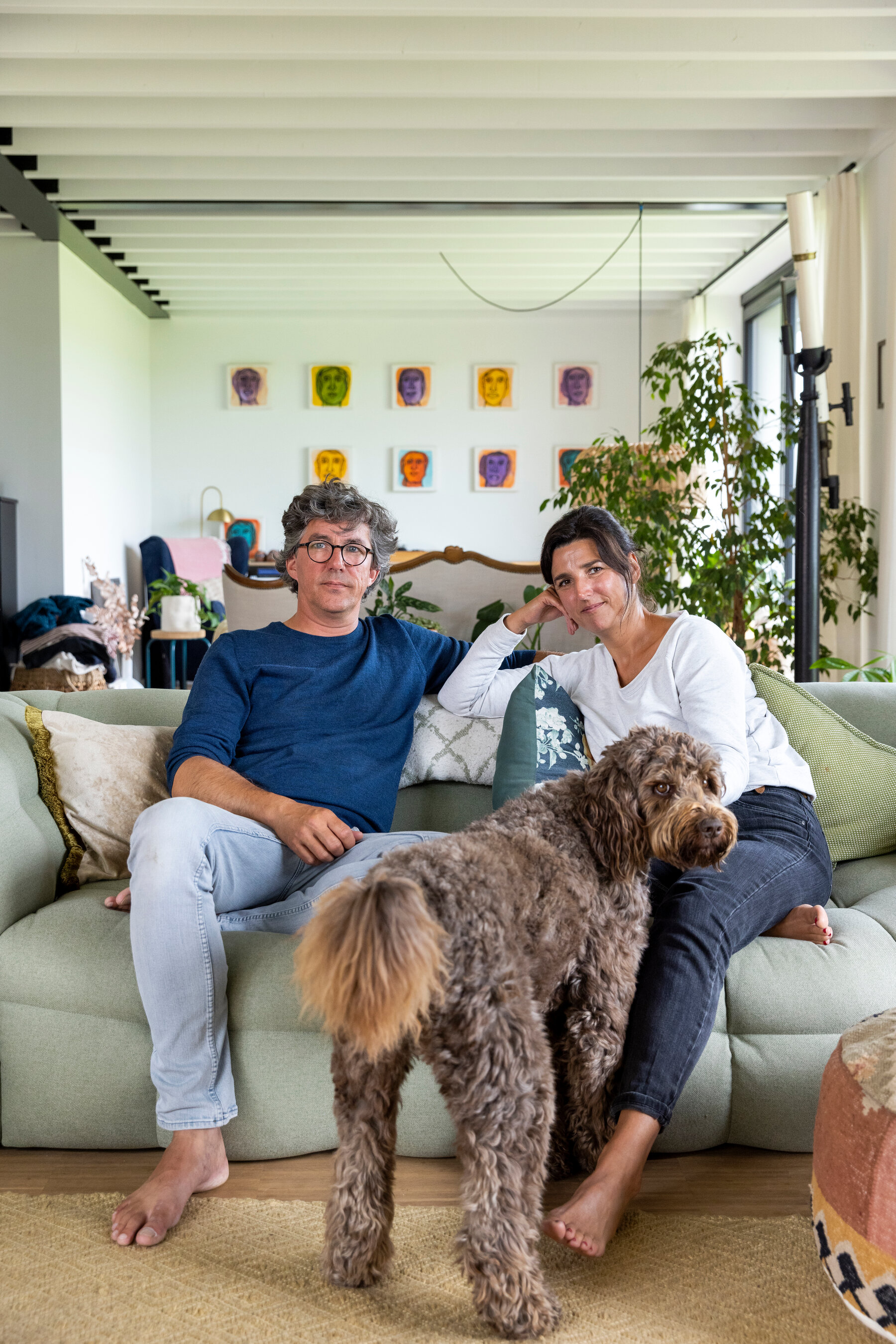 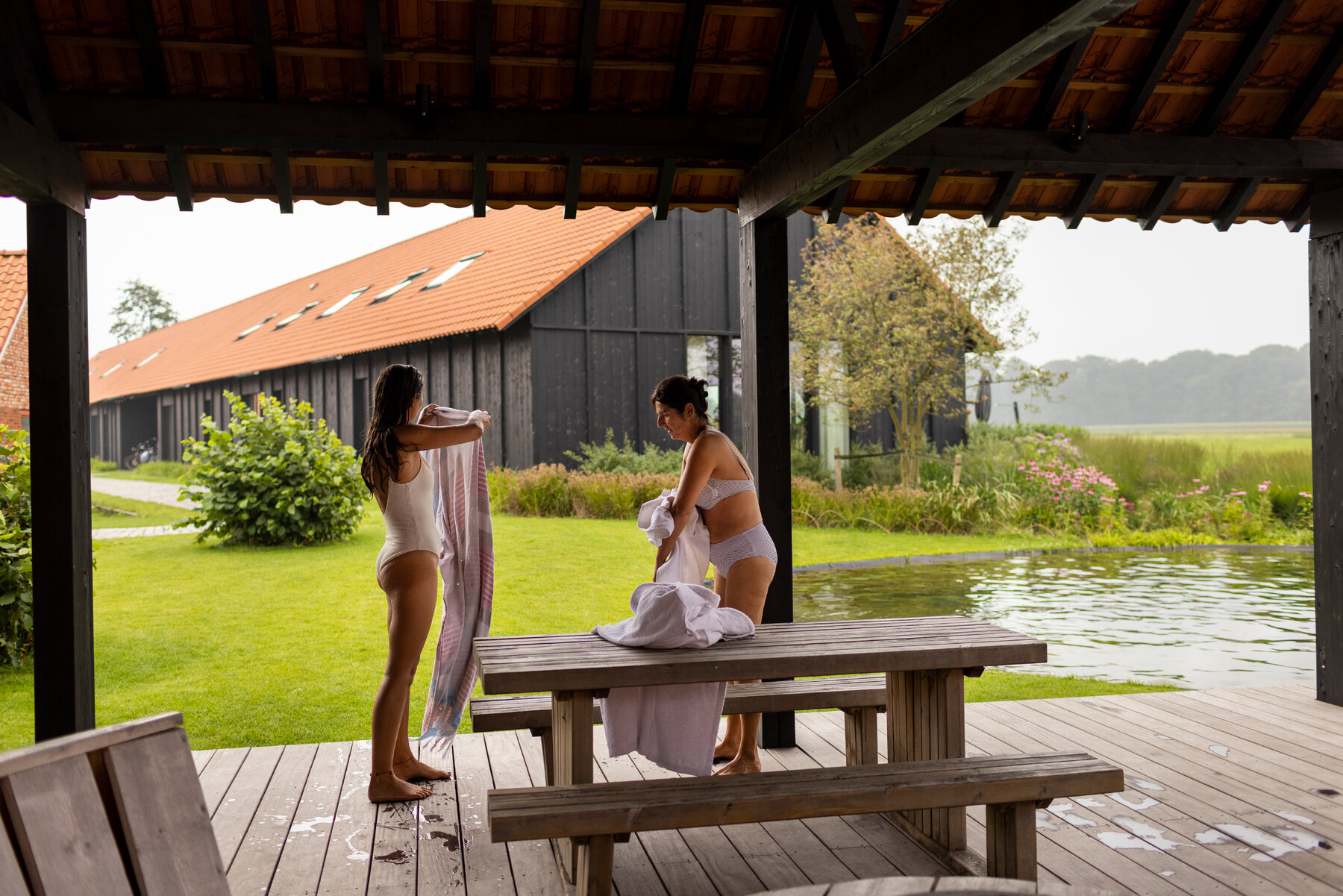 Qville is a four-acre development in Essen, Belgium, recently built on the site of stables used to quarantine horses at the Dutch-Belgian border.

The development’s historic architecture is a draw for its residents, including Maikel Cator, and his wife, Linda Hoeijmans.

Qville also has a communal pond, which residents like Linda Hoeijmans, right, and her daughter, Sien Cator, take advantage of.

Qville includes 44 almost net-zero houses with terraces and private gardens, a swimming pond, an indoor pool, a community center and a communal garden. Three electric cars, which are also shared, are parked in a large underground garage.

Ingrid van Ravenhorst, 66, moved there in November 2019 with her husband, Dirk Lodewycks, 68, an artist. She described the development as “soft co-housing” because it is too big for activities like communal dining. Qville does have several organized groups, including the gardening group she belongs to. But “no one will blame you if you don’t participate,” she said.

Mr. Cator, 49, a project manager for a yacht-building company, and Ms. Hoeijmans, 50, have been living in Qville for almost three years, attracted by the architecture, meadows and pond. “Only the exteriors of the original buildings could be preserved, so the homes are quite modern,” Mr. Cator said. “Inside, you were free to make it as you wished.” 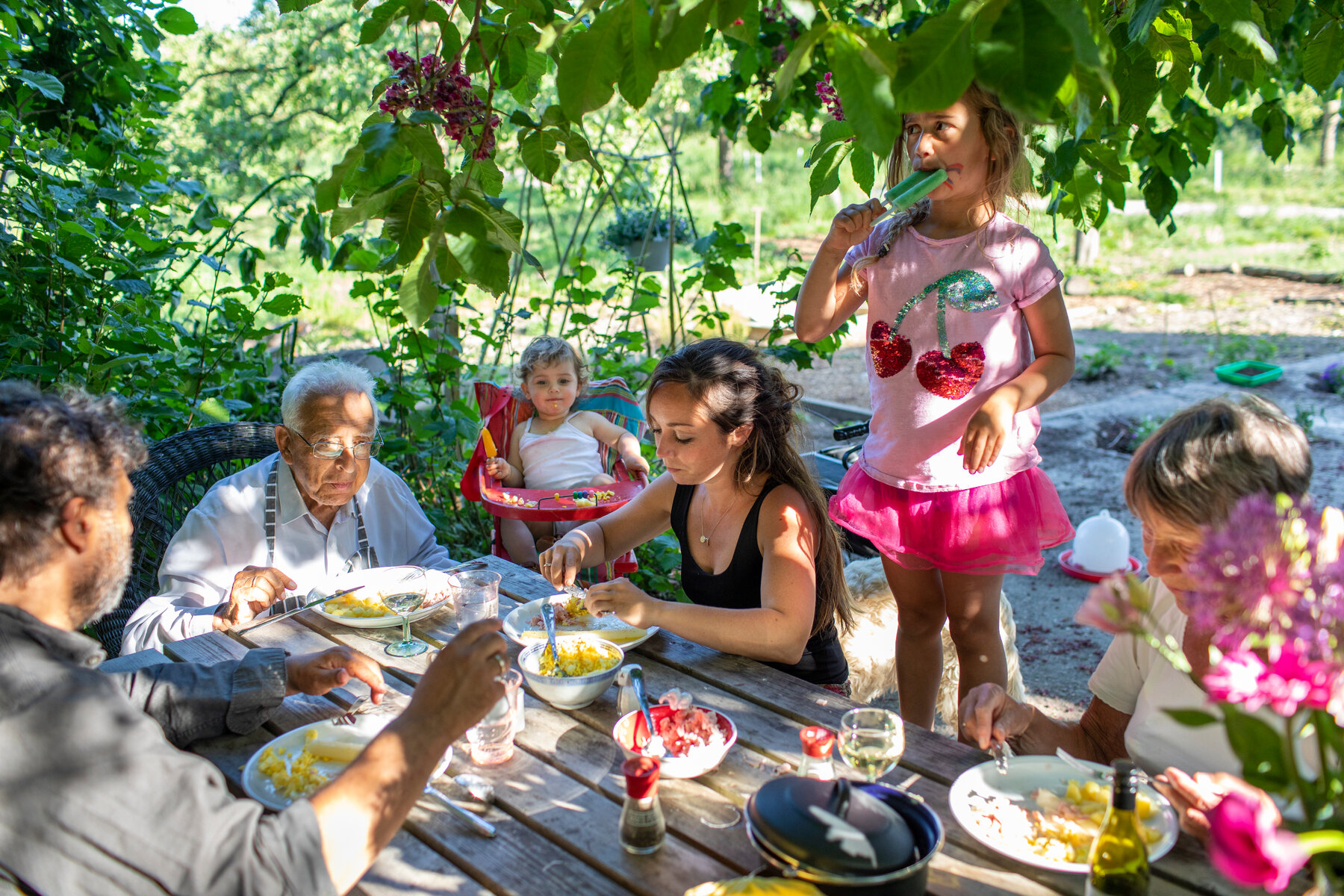 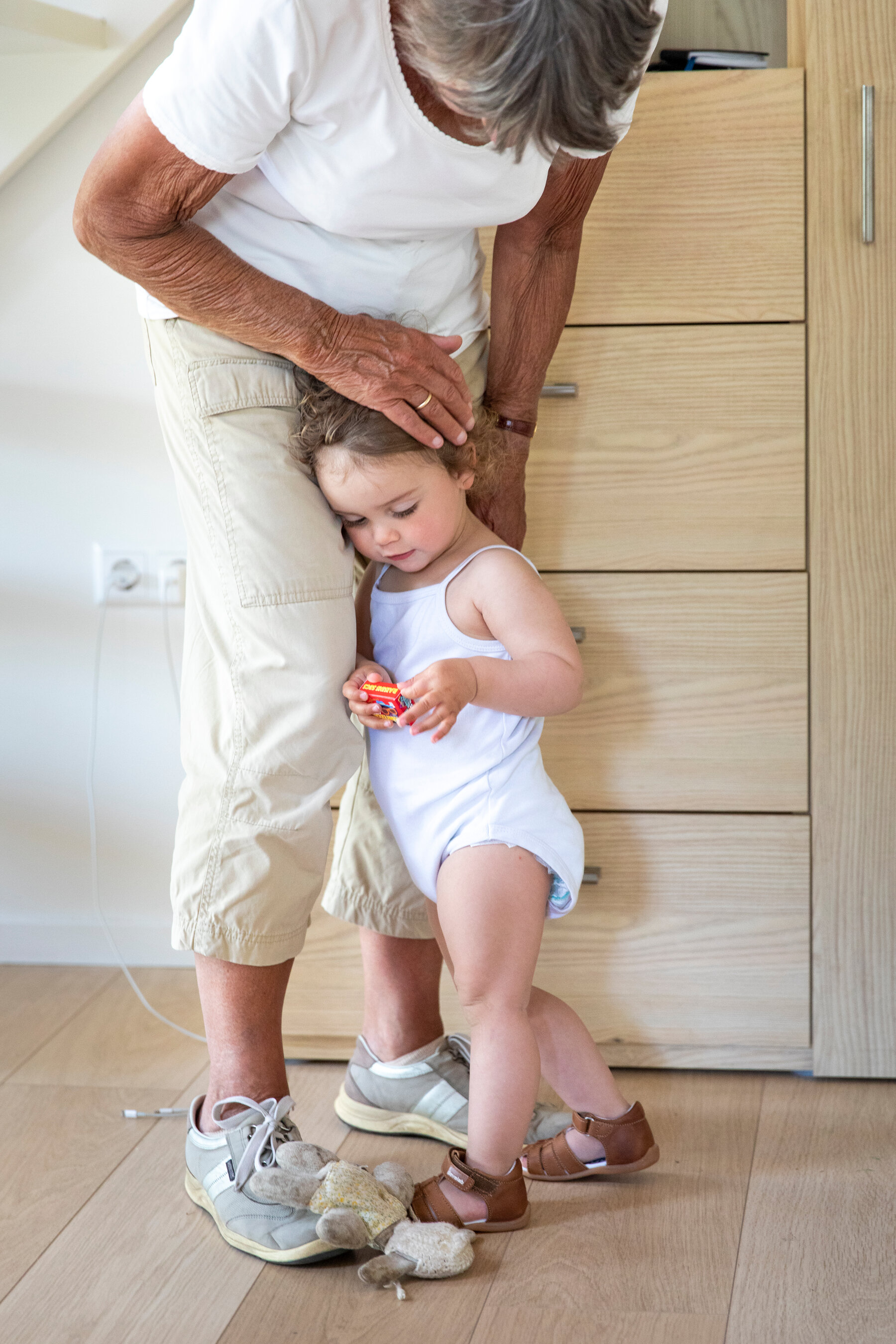 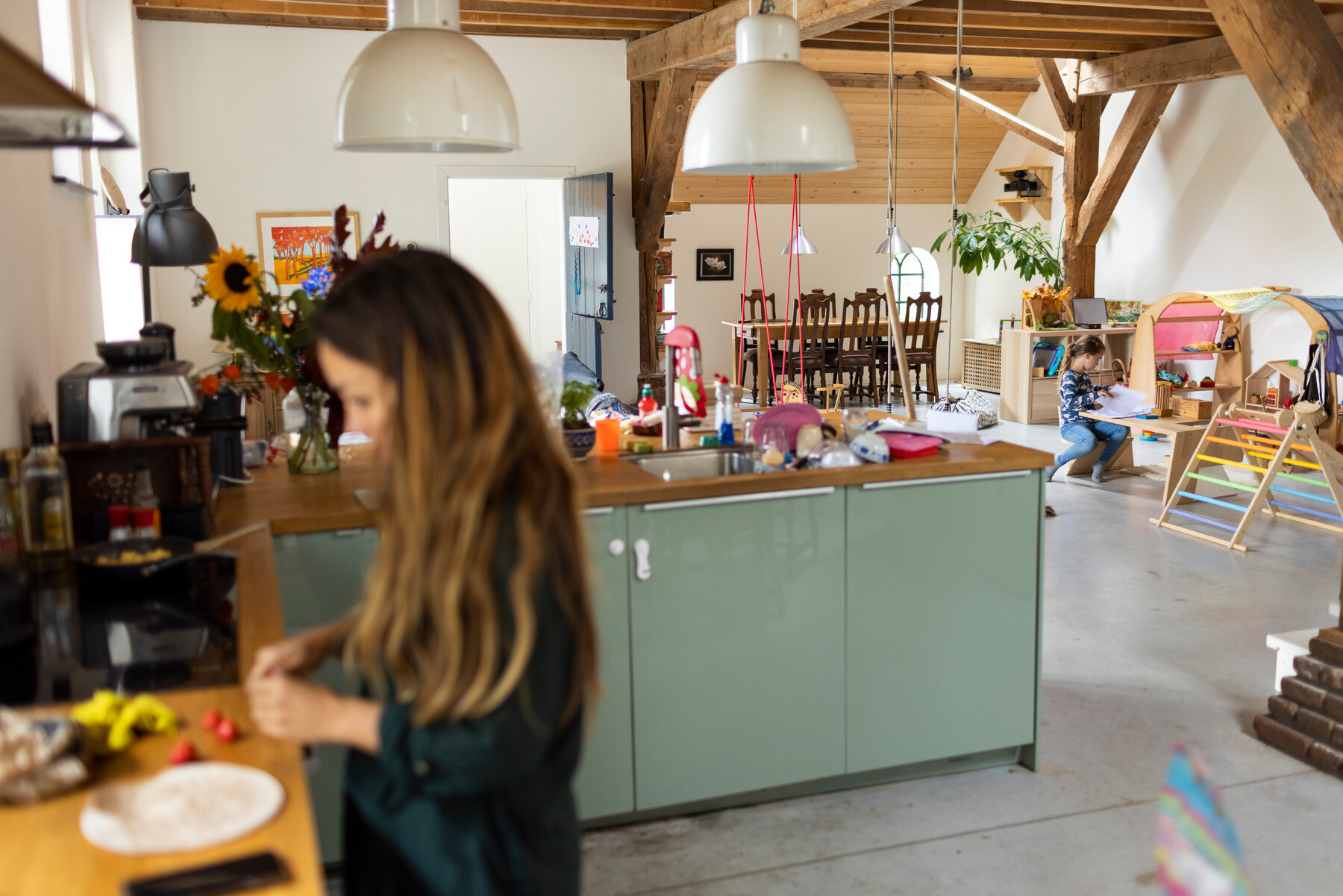 A farmhouse in the town of Zoelmond, the Netherlands, became a multigenerational home for one family.

Older residents help raise their grandchildren, while benefiting from the proximity of adult offspring.

The family lived in the stables before converting them into a common room with a kitchen.

In 2017, Peter Blom, now 54, together with his wife, Lisa Wade, 42, and their daughters, Simcha, 8, and Norah, 2, moved to the farmhouse. The couple converted the nearby hay shed into a home for Mr. Blom’s parents, Els and John, who were in their 80s when they moved in.

“It feels really good to live with my mom and dad now,” Mr. Blom told me last year, when I began documenting the family. “As a baby, you need the nurturing of your parents; it is nice to be able to give this back in the last part of their lives.” The convenience of the arrangement cuts both ways, he added, with the elders helping with child care.

Mr. Blom also saw the farm as a form of compensation. His father, the son of a Jewish baker in Amsterdam, was the only member of his family to survive the Holocaust and wrote a book about it. “I wanted to give him a home again, a place where he belonged and where he could feel safe and cherished,” he said. John Blom died in 2020. 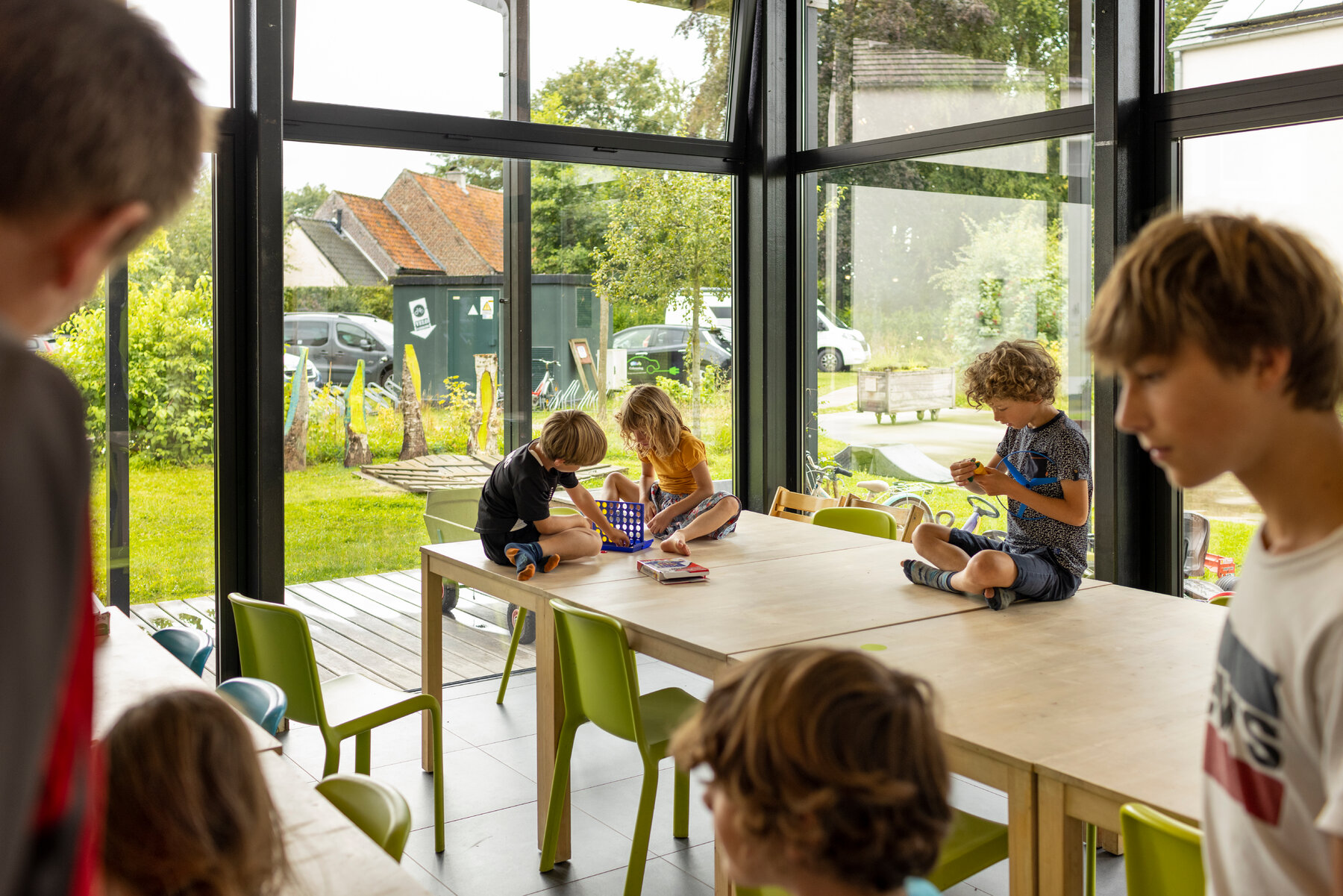 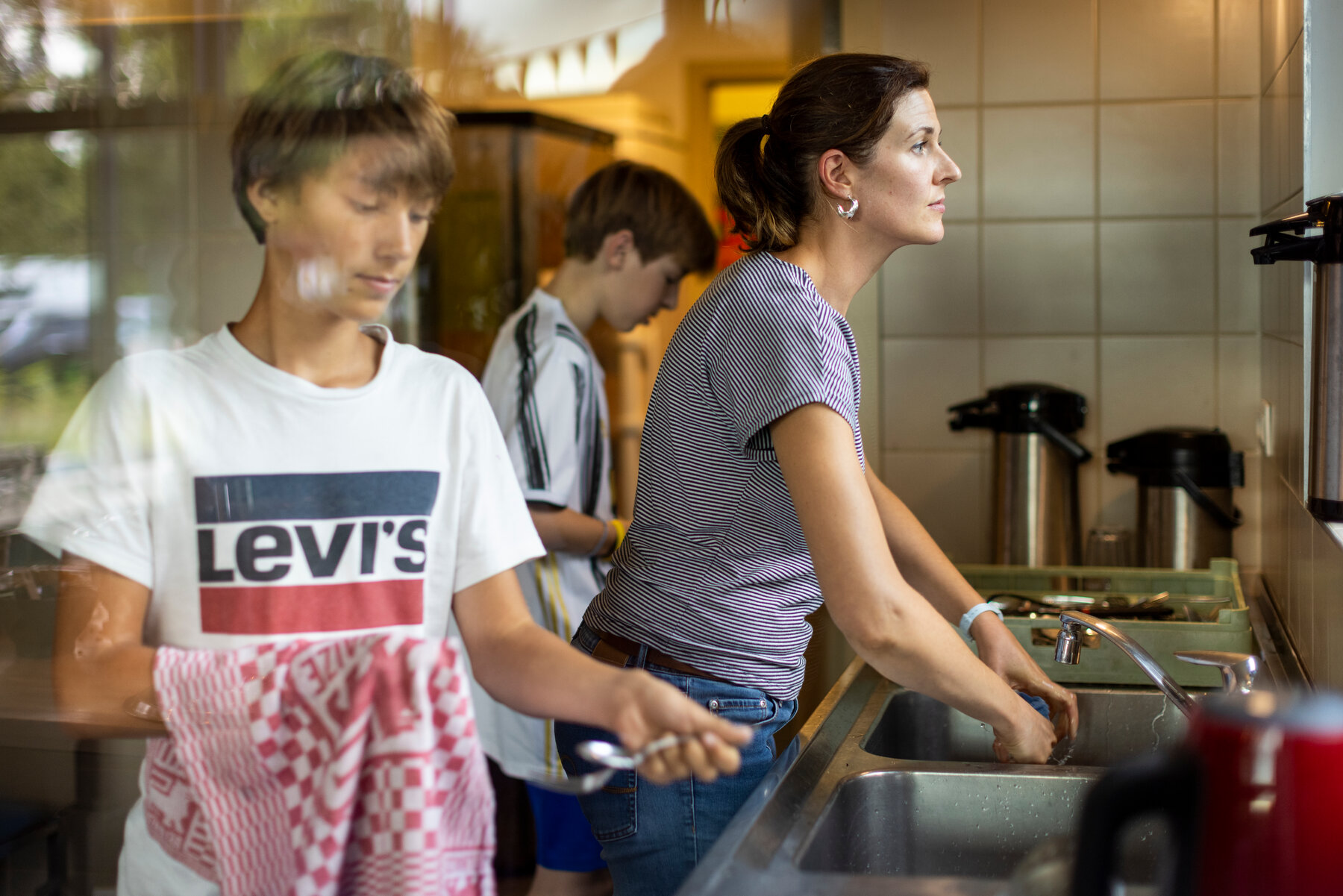 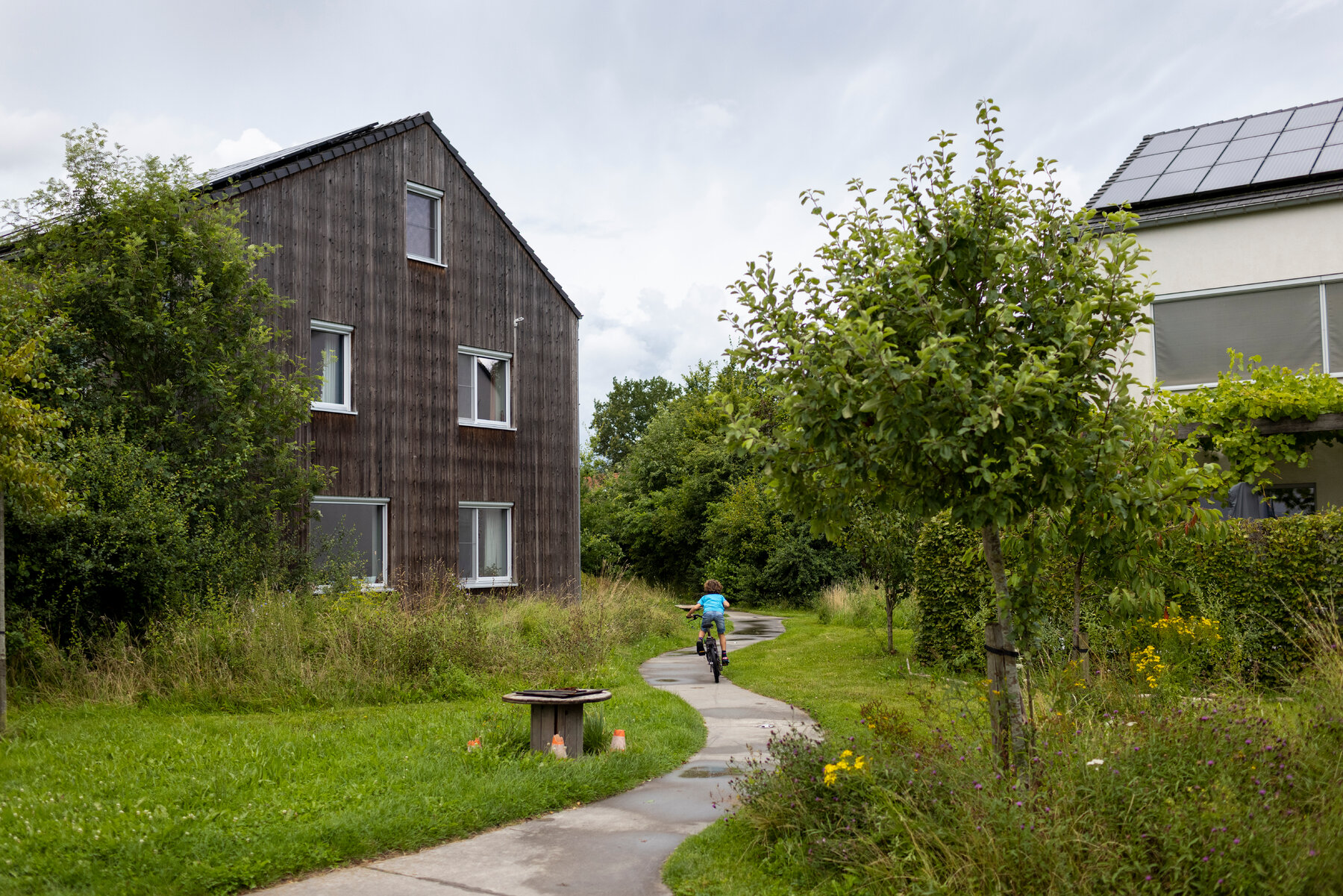 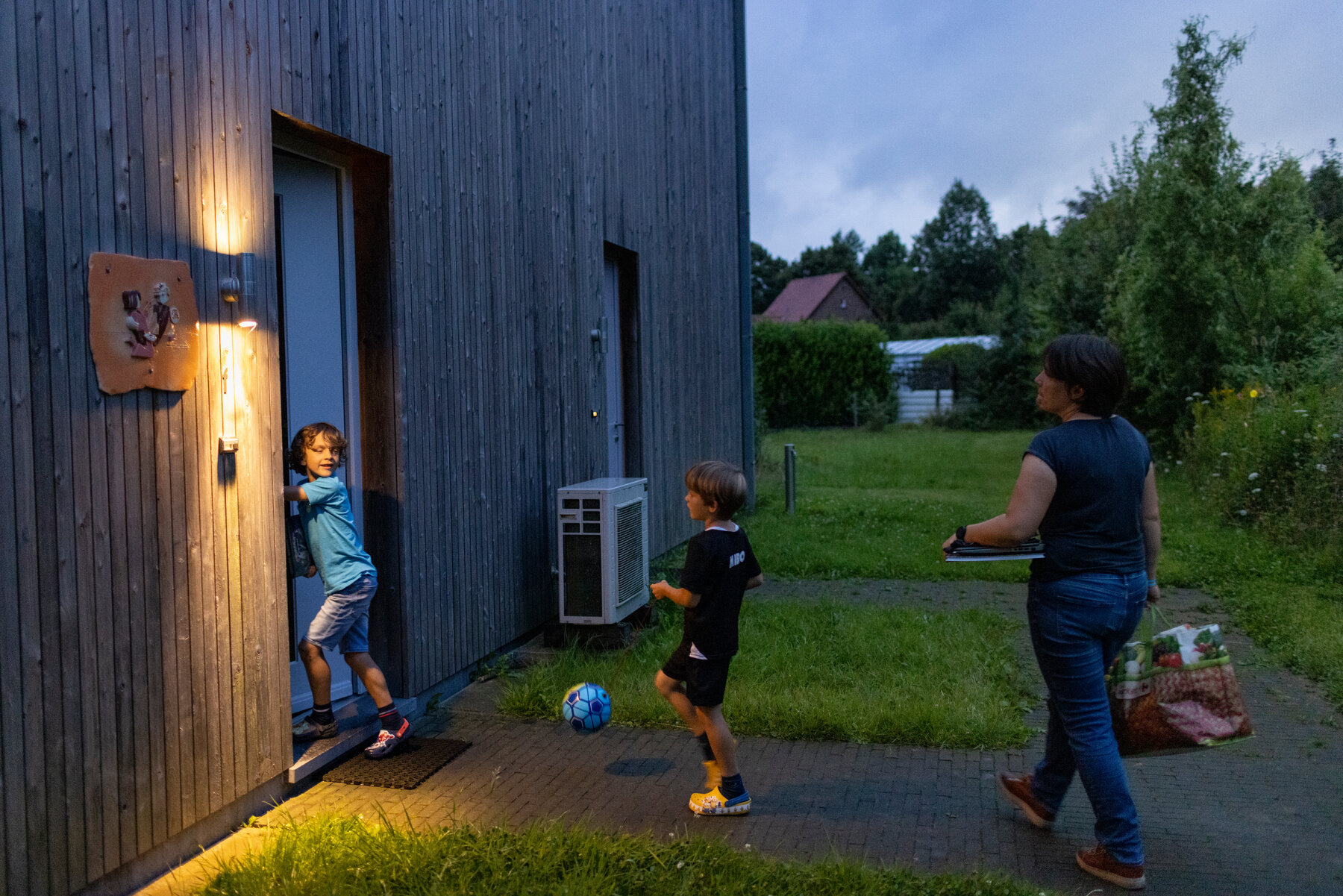 Residents prepare meals twice a week at a common house.

An attraction of the development is space for children to ride bicycles and swim.

Most families in the community moved to Vinderhoute in 2012 (it opened in late 2011).

“With us, the idea of co-housing has grown organically; it was not our dream,” Ms. Bouchier told me. The couple wanted to start their family in a place with greenery and a garden and liked the idea of being close to Ms. Bouchier’s parents and the city of Ghent, where they both work in I.T. But they doubted that a communal life would suit them. Now, they are “fanatical” about co-housing, Ms. Bouchier said. “Real die-hards.”

Part of the groups in charge of social events and managing the common house, she is now used to making decisions by consensus, even if it means furnishing shared spaces with different-colored chairs because the group could not settle on a single hue.

Mr. De Busscher, she added, is on the “boring team” — the one dealing with financial matters and regulations. “But that also has to happen.”