A naive recruit, a bullying boss and a subtle tale of seedy, sexual office politics: BRIAN VINER reviews The Assistant

The Assistant is not the first film to broach the subject of sexual harassment by powerful men in the entertainment industry, which spawned the #MeToo movement, and it certainly won’t be the last.

But it will always be one of the best. I liked last year’s Bombshell, which starred Charlize Theron, Nicole Kidman and Margot Robbie, and chronicled the downfall of Roger Ailes, the head of Fox News, who was eventually forced to resign not because of his long history of unwanted sexual advances, but rather because they had been made public. 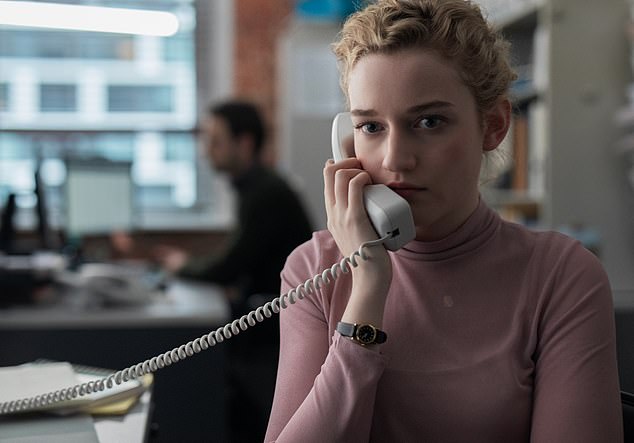 Julia Garner shines in The Assistant, which follows an assistant working in a New York City workplace with a n unmistakable resembles to Harvey Weinstein’s company Miramax

The Assistant is much less starry and takes a very different, far subtler approach, fictionalising events over the course of a single day in a New York City workplace that is unmistakeably modelled on the offices of producer Harvey Weinstein’s company Miramax.

Nor, at risk of giving away spoilers, is there any comeuppance in this story.

The unnamed and unseen Weinstein-type character is omnipotent; everyone in the organisation dances to his tune.

Another way in which Australian writer-director Kitty Green’s excellent film differs from Bombshell is that it’s told not from the perspective of a victim — at least, she’s not a victim yet — but from that of a bright young assistant only five weeks into the job.

Gradually, she has learnt that one of her many tasks, along with answering the phone, visiting the photocopier and booking flights, is enabling her boss’s trysts with much younger women, and sometimes literally scrubbing the ‘casting couch’ after them.

She is wonderfully played by Julia Garner, recognisable to anyone who watches the brilliant Netflix series Ozark as that drama’s hard-as-nails hillbilly Ruth.

Here, she’s Jane, not that anyone deigns to call her by her name. As the junior — and as a woman — she is treated dismissively even by her fellow (male) assistants.

She works such long hours that she forgets her father’s birthday. But in what often seems almost like a fly-on-the-office-wall documentary and runs to only 87 minutes (significantly, Green’s background is mostly in factual film-making), she accepts all this as the price of an entry-level job in an exciting industry.

Jane is in almost every shot but doesn’t say much.

Her thought processes are what matter here, and both Green and Garner deserve enormous credit for somehow making them so eloquent.

The picture’s best and most important scene comes when she decides she needs to raise some kind of alarm, and goes to see the head of human resources, exquisitely played (in little more than a cameo) by Matthew Macfadyen.

I won’t describe that encounter here because it’s pivotal to the film, and by extension highly enlightening in explaining why and how some influential men managed (I use the past tense circumspectly) to get away with such ugly behaviour for so long.

Verdict: Full of spice and zest

If you watch The Assistant, then I warmly recommend following it with Diana Kennedy: ­Nothing Fancy as a kind of antidote, a cinematic anti-bacterial cleanser after all that grubbiness.

It’s a lovely documentary about a remarkable, fruity-voiced Englishwoman who appears to have lived her long life entirely on her own terms, and in the process has become one of the world’s foremost authorities on Mexican cooking. 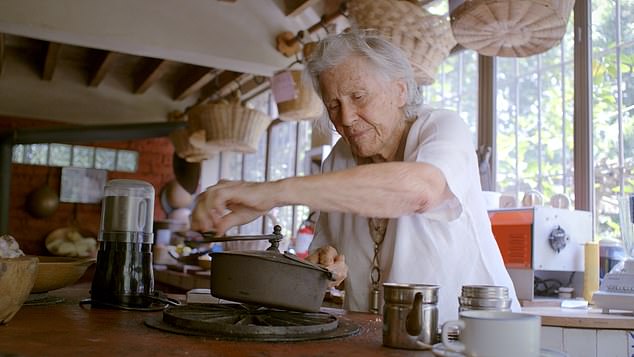 Diana Kennedy is well known in the US, where her books, TV shows and demonstration tours have inspired professional chefs and home cooks

I love burritos and enchiladas almost as much as life itself, but I confess that I’d never heard of Diana until I watched Elizabeth Carroll’s enthralling film portrait.

That’s because she’s better-known in the U.S., where her books, TV shows and demonstration tours have inspired generations of professional chefs and home cooks.

She has lived in Mexico since 1957, apart from a period when she moved to New York because her beloved husband needed cancer treatment.

He died in 1967, and since then she has been ploughing her own furrow with singular spice and zest, exploring all the regions of Mexico, often by bus, and never failing to return without at least one new recipe.

Diana is scrupulous about crediting recipes, and nothing enrages her more than people plagiarising hers, except when she sees some fool adding garlic to guacamole.

She is 97 now, but long may she go on skinning avocados. The word ‘character’ hardly begins to do her justice.

We’re now heading into the top 50 of my 100 favourite English language films, so I’m bracing myself for criticism, but you’ve been very kind to me so far. Do send me your thoughts ([email protected] uk).

In the meantime, remember that all these great films are available to stream, download or order on DVD. Happy viewing! 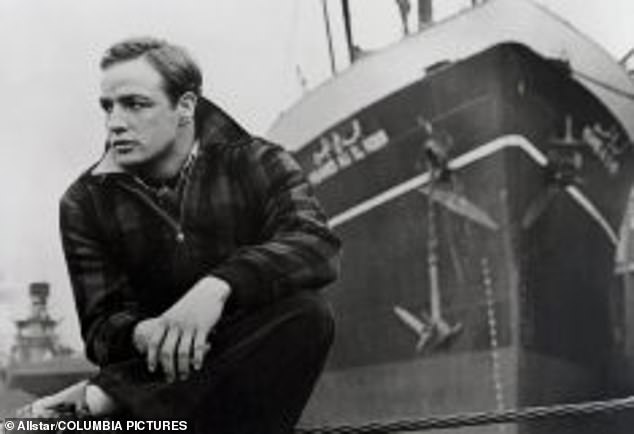 Marlon Brando shines in On The Waterfront, in which has one of the most quoted lines in cinema history, ‘I could’ve been a contender’

Steven Spielberg’s masterful monochrome telling of one of the most compelling true stories to emerge from the tragedy of the Holocaust. It deservedly won seven Oscars, although Liam Neeson and Ralph Fiennes, who are both absolutely brilliant, missed out.

Clever, funny, moving, original … this road-trip movie through California’s wine country is a huge treat. Look out for Sandra Oh (best-known now for Killing Eve), at the time married to the film’s writer-director Alexander Payne.

No list of great films could possibly be complete, at least not in my book, without Fred Astaire and Ginger Rogers. Here they are at their spellbinding best, with the help of some classic Irving Berlin songs.

Gene Hackman is one of my favourite actors and this is his role of roles: NYPD detective ‘Popeye’ Doyle on the trail of a French heroin trafficker, marvellously played by Fernando Rey, leading inexorably to one of the best cinematic car chases of all time.

Bette Davis and Joan Crawford, who hated each other, play ageing sisters, both showbiz veterans, who hate each other. It’s creepy, at times crazily melodramatic, and still one of the most gripping psychological thrillers I’ve ever seen. 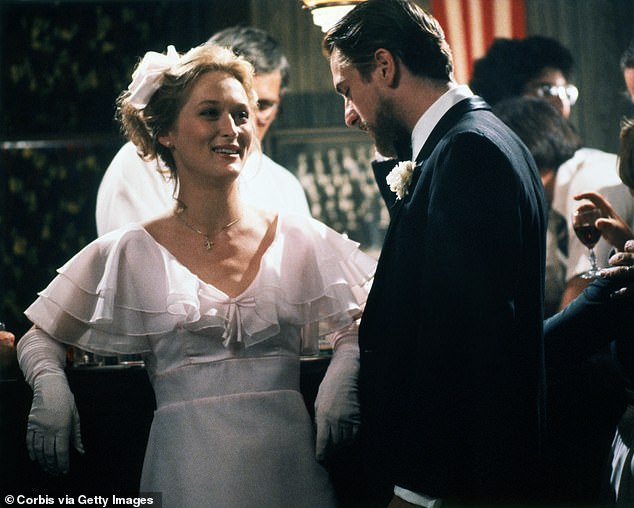 You could argue that at more than three hours, it’s too long and too gruelling. But Michael Cimino’s epic tale of Pennsylvania steelworkers pitched into the Vietnam War is a tour de force of storytelling, with some amazing scenes.

Gregory Peck won an Oscar for his pitch-perfect performance as upright small-town lawyer Atticus Finch in this wonderful adaptation of Harper Lee’s novel. I was horrified to learn that my three children have never seen it, so now I’m on the case.

The boxing scene, even 89 years on, might still be the greatest piece of choreographed slapstick ever. It’s worth watching for that alone, but there’s so much else to cherish, in an immortal exhibition of Charlie Chaplin’s genius.

Eight Oscars, one of the most quoted movie lines of all time (‘I coulda been a contender’), plus Marlon Brando (right), Eva Marie Saint and a Budd Schulberg script. Enough said.

My wife and I are in confinement with our three adult children, which yields some lively discussions about important topics such as: what is the greatest Pixar film? For my daughter, it’s this superhero spoof. Unbeatable family viewing.