Britney Spears has officially spoken her truth about the conservatorship that has controlled her life — and love life — for decades.

Innerestingly, despite being oppressed in many ways, the Toxic singer HAS apparently been able to find love in recent years, thanks to Sam Asghari.

It’s time to take a trip down memory lane and recall just how their romance persevered through the drama!

From love at first sight in 2016 to a desire for babies today, here’s everything to know about this sexy couple…

The moment they met! Sam starred in Brit’s music video for Slumber Party way back when, filmed in a lavish Beverly Hills mansion.

Previously, the actor and singer had stunned music lovers as a hot construction worker in Fifth Harmony’s Work From Home video, so he knew his thing or two around a camera! But he got WAY more than he signed up for with Brit…

Nearly a year later, the Circus vocalist went Instagram official with her former co-star! The big announcement was made with a picture taken on New Year’s Eve of the couple out to dinner for the big night. The Iran native was seen with his arm around the celeb, who couldn’t have looked happier! 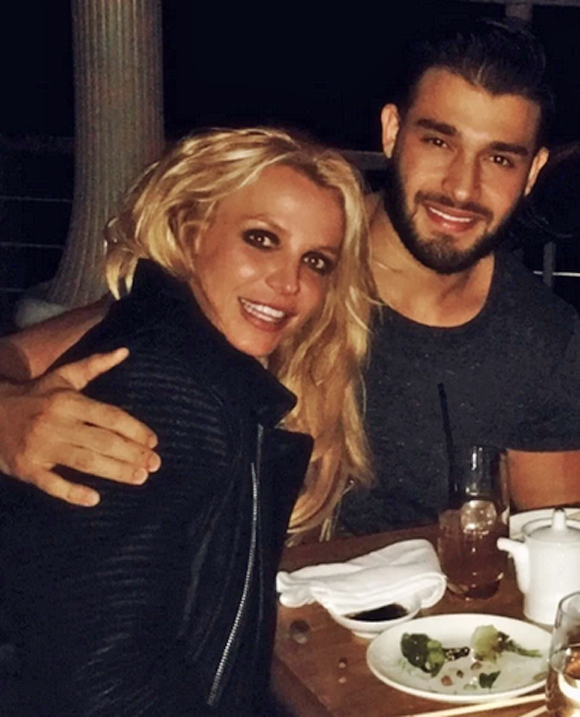 Their romance continued to blossom in public as they made an appearance at Clive Davis’s pre-Grammy gala in February.

By March, Jamie Lynn Spears’ big sis was wisher her beau a happy 23rd birthday on the ‘gram, giving fans a glimpse at their private life. For the upload, the pop star included a photo of the couple out on a hike — staying fit and making memories together!

Later in the month, they attended designer Michael Costello‘s Art Hearts show during LA’s fashion week. Faye, the BF’s sister, was walking the event so it was a true family affair!

As Spring rolled around, Britney couldn’t help but reflect on a “beautiful day” she spent with her significant other in Malibu. Posing on the porch of a restaurant, she donned a simple but chic polka-dotted dress, while the stud rocked a classic black tee and skinny grey pants. Both looking radiant as ever! 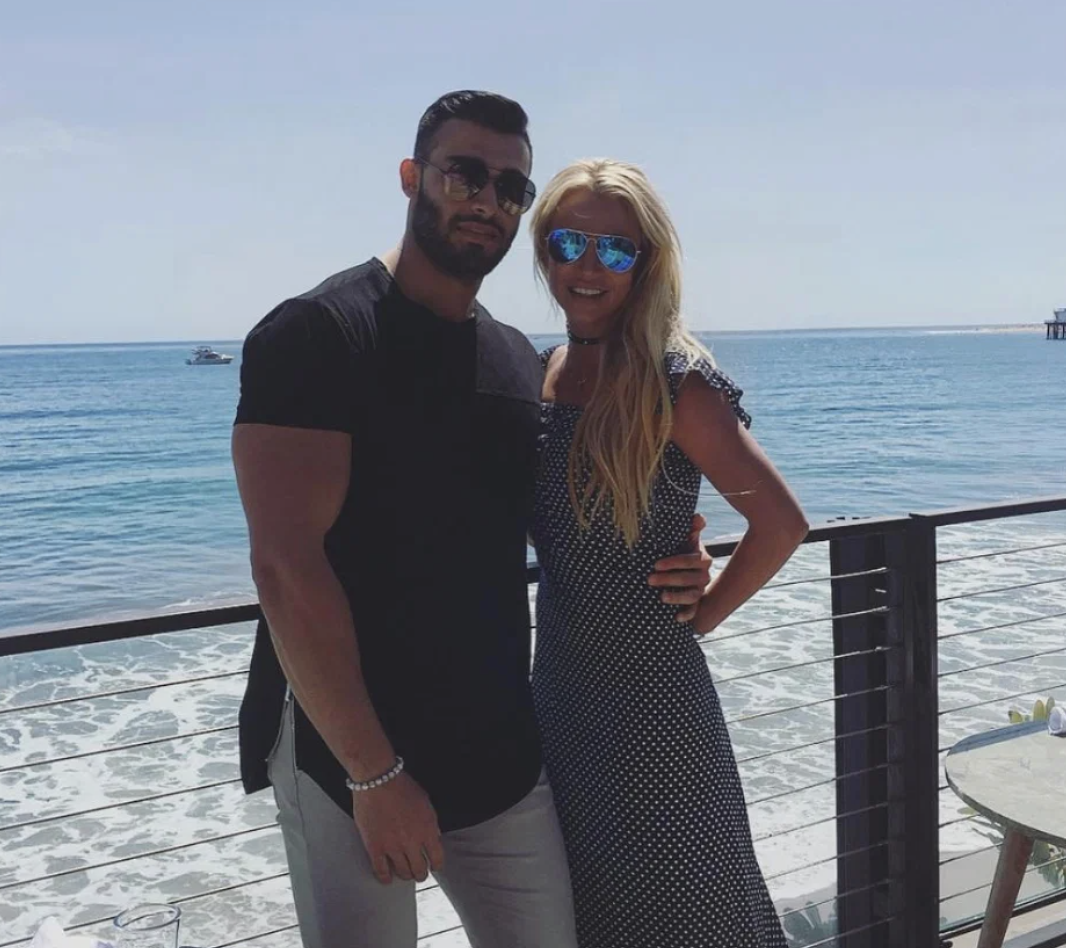 In May, Sam introduced a new nickname for the songwriter — his little “lioness”! That pet name would go on to prove its meaning in time! Sharing a snapshot of them backstage at a concert, Asghari was clearly loving being in his lady’s company during her touring days.

A month later, the actor even flew to Japan to watch a show during the international leg of the Piece of Me tour! As if they couldn’t be any cuter, the lovers wore matching pink outfits in a pic captured out and about in the big city! Brit captioned the pic: 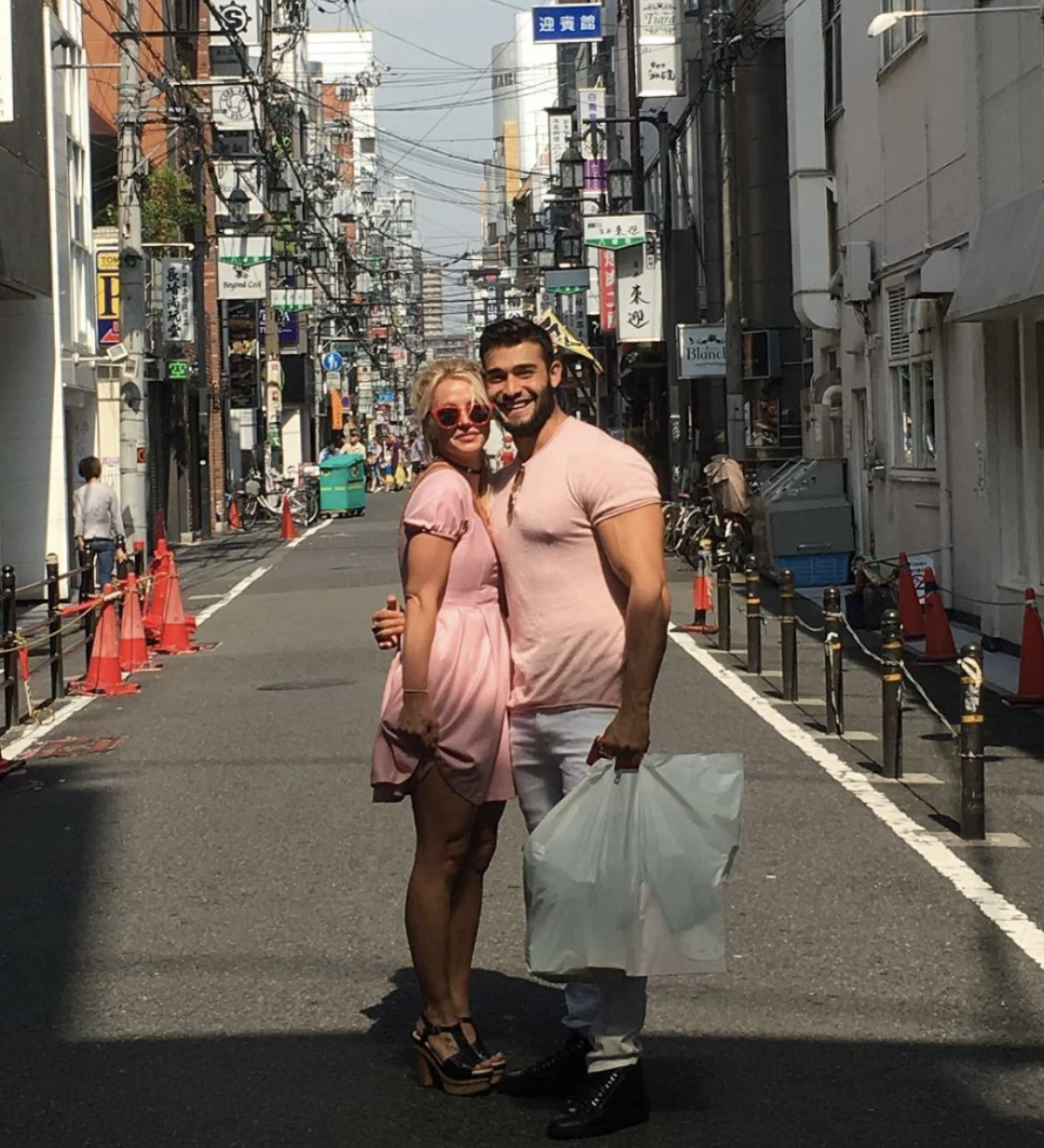 Things grew even more serious when the lovers shared a PDA-filled trip to Disneyland with Britney’s kids!

Celebrating Sean Preston and Jayden James’ birthdays (both of whom spend most of their time with dad Kevin Federline), the personal trainer said he considered himself the “Happiest man on earth” while at the “happiest place on earth”!

Two months later, they were spotted on another glamorous date night! The couple looked cute AF while sitting curtsied at a Los Angeles Lakers vs. Golden State Warriors basketball game in El Lay in November!

One year into their publicly confirmed romance, the fitness enthusiast called the Glee guest star his “partner in crime” on New Year’s Eve! See the funny vid (below)!

After a long time waiting for more inside scoop on the relationship, Britney got real with fans on IG in February, writing:

“I’ve been with this man for over a year. Everyday he inspires me to be a better person and that makes me feel like the luckiest girl in the world!!”

Love to hear that! He certainly seemed to live up to the hype as he supported his girlfriend at the 2019 GLAAD Media Awards in April, where she was honored with the Vanguard Award for her dedication to the community! 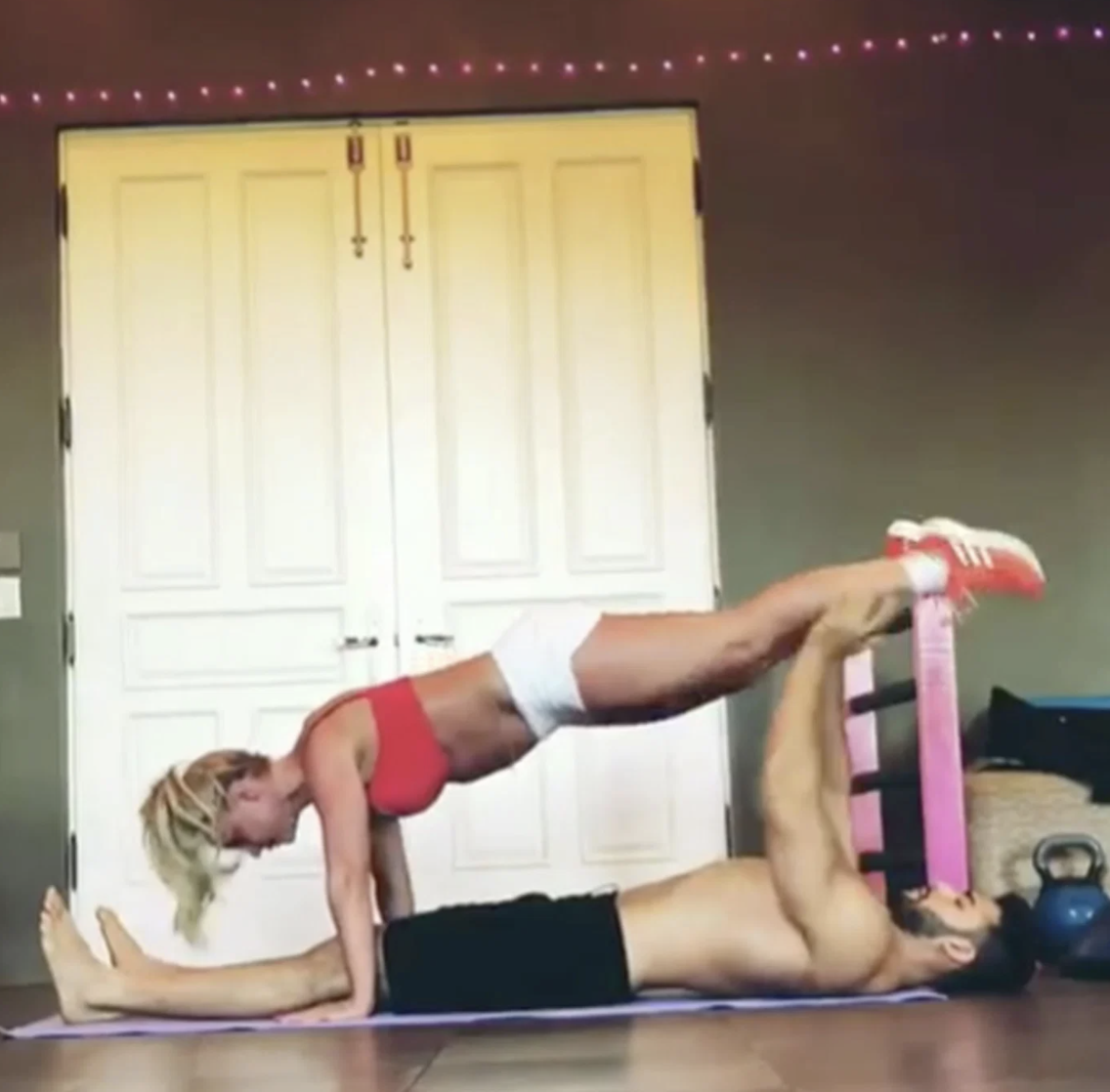 Not without their faults! While hamming it up on social media became the pair’s favorite pastime, the Mississippi-born artist admitted not all the videos they made were easy to capture! One workout clip in May was particularly challenging, and they actually “did 40 and I hurt myself,” according to an interview with Associated Press. 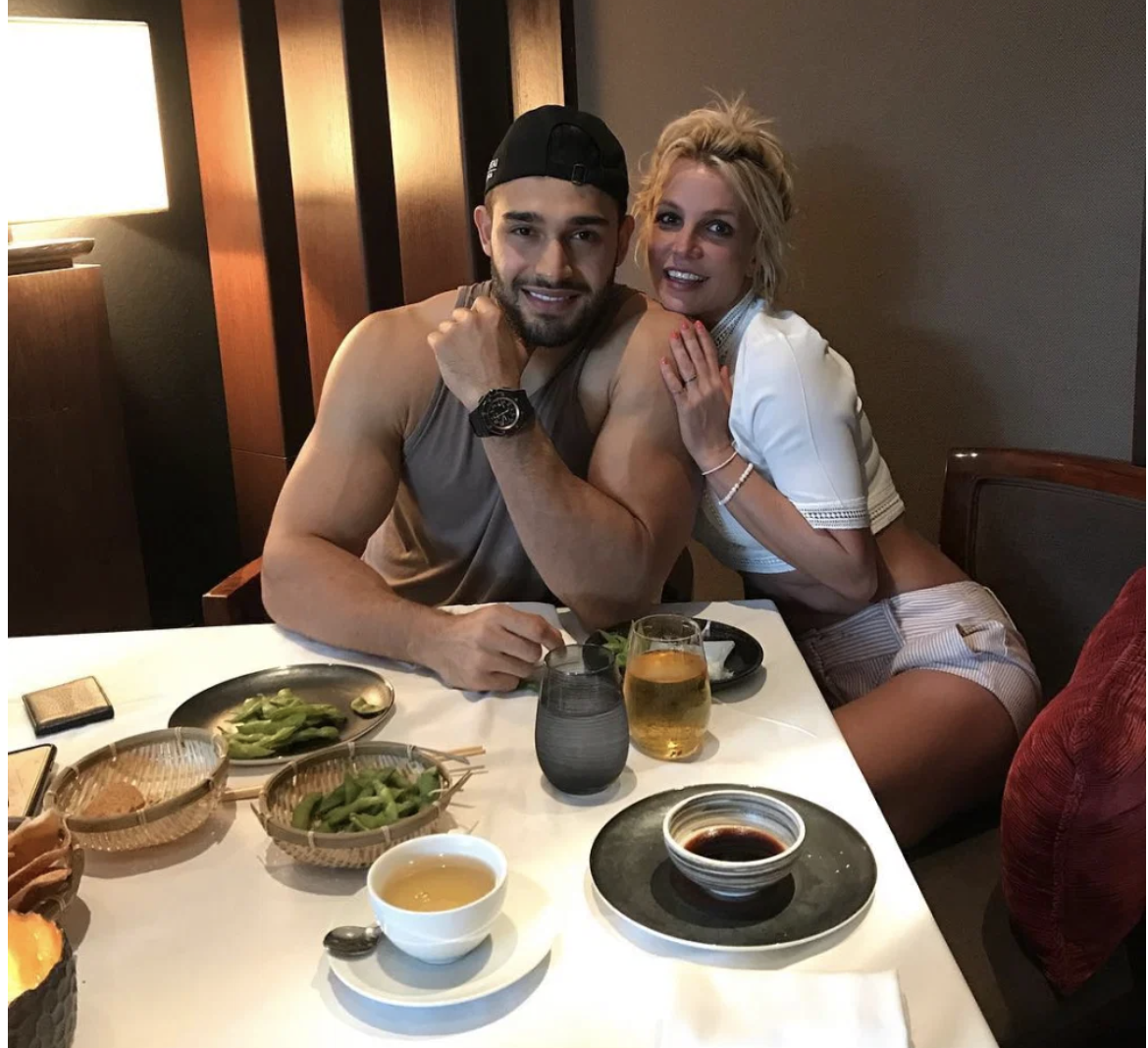 Just when we thought they couldn’t get cuter —–they proved us wrong! While taking a trip to Miami, the lovebirds recreated their very first date, which was a sushi dinner date! She even called him her “other half”!

After a summer filled with fun under the sun, The Can You Keep A Secret actor joined the momma of two at her son Jayden’s football game. So supportive!

Pucker up! November was a big month for shippers when Britney uploaded a snapshot kissing her man on the cheek while at the beach!!

As mental health struggles began to take over her life and issues with her conservatorship arouse, Britney completed a stint in rehab for mental health. As she worked on her wellbeing, Sam remained by her side! Once her treatment was complete, the How I Met Your Mother alum gushed:

“I love this man @samasghari”

Getting cheeky on the timeline! Enjoying the summer once again, Britney shared a photo from a bike ride they shared, writing:

“I’m so blessed to have this in my neighborhood”

“Are you talking about the lake or that handsome gentleman?”

Safe to say she was talking about the “handsome gentleman”!! Because days later, the entertainers were recreating an iconic moment from The Titanic — posing like Jack and Rose at the front of a boat! It also just so happened they were in teeny-tiny bathing suits at the time, and photographers definitely caught Sam checking out his beautiful lady while he was getting into position!

Tropical destinations remained this couple’s thing for the month as they were spotted holding hands while on a getaway in South Florida.

Once Upon A Time In Hollywood… Britney got engaged?!?! 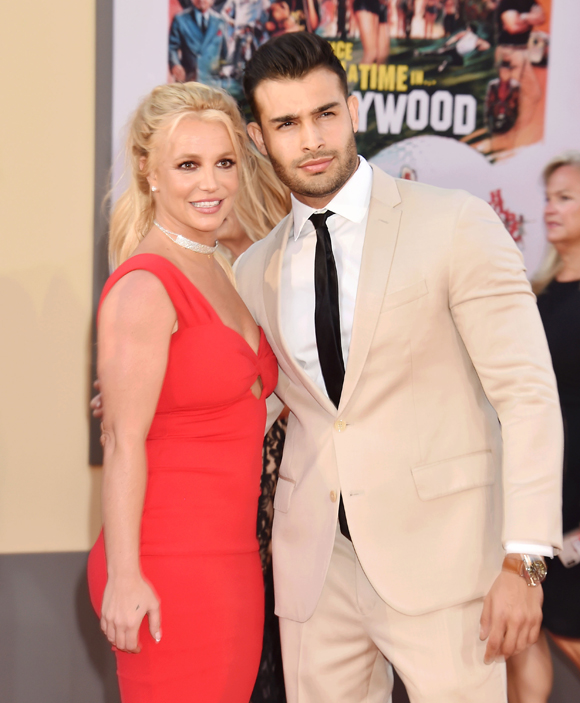 At the red carpet premiere of Brad Pitt and Leonardo DiCaprio‘s film, Spears showed off a diamond ring on THAT finger! Obviously, we freaked the f**k out, but the couple did not clarify whether or not they’d gotten engaged. Instead…

The gym junkie told Us Weekly he and Brit kept each other accountable to their fitness goals in an exclusive interview, explaining:

“You have to stay on top of that. When it comes to our busy schedules, both of us, we try to support each other as best as we can.”

Speaking of staying on top… 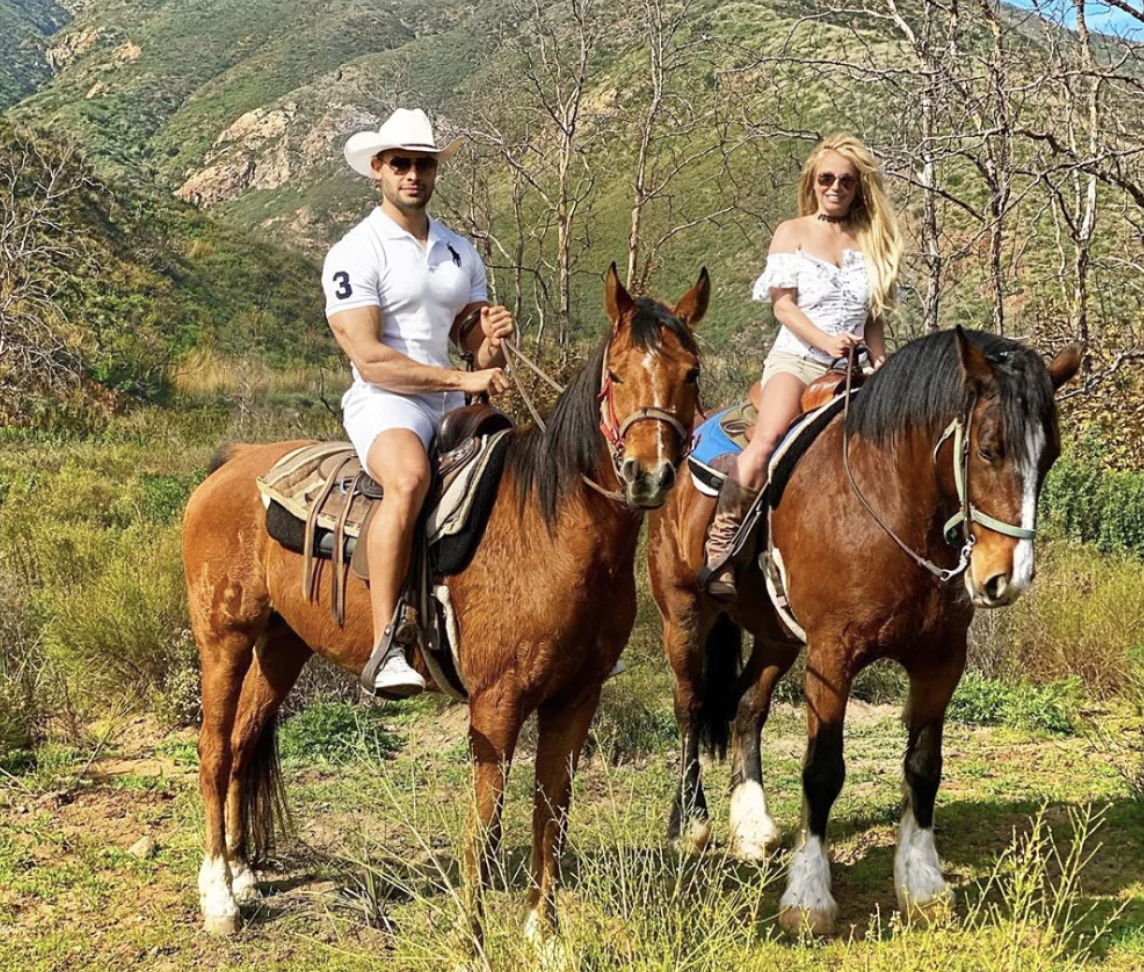 Just before the world ended as we knew it, the duo went horseback riding together!

After the performer suffered an injury, her beau took to IG to wish her a fast recovery, writing a patient post to the app that seemed to hint at more than just the physical wound, saying:

“When you break something it tends to heal stronger, specially when you’re my girl

Wishing her the best recovery so she can jump, run, and dance her butt off

Meanwhile, she gushed about what a “stunner” he was, months later adding how “grateful” she was to get to “stay in shape with” with her BF in a cheeky video!

As we recover from that gun show…

The couple shared many beach dates over the summer, socially distanced of course!! Check out their fun moments (below)!

As fall rolled around, it was time for a break. And it was well-timed given the chaos that would surround Britney soon! For the superstar’s 39th birthday, the pair took “a little trip to paradise.” While in Hawaii, Britney reflected:

“I’m doing that whole work on yourself thing at the moment.”

All that reflecting paid off!! After the release of a New York Times documentary spurred up conversations around Jamie Spears and the singer’s conservatorship, Asghari defended the singer amid her legal battles, writing:

“Now it’s important for people to understand that I have zero respect for someone trying to control our relationship and constantly throwing obstacles our way.”

“In my opinion Jamie is a total d**k. I won’t be going into details because I’ve always respected our privacy but at the same time I didn’t come to this country to not be able to express my opinion and freedom.”

A day prior, he also told People:

“ always wanted nothing but the best for my better half and will continue to support her following her dreams and creating the future she wants and deserves. I am thankful for all of the love and support she is receiving from her fans all over the world, and I am looking forward to a normal, amazing future together.” 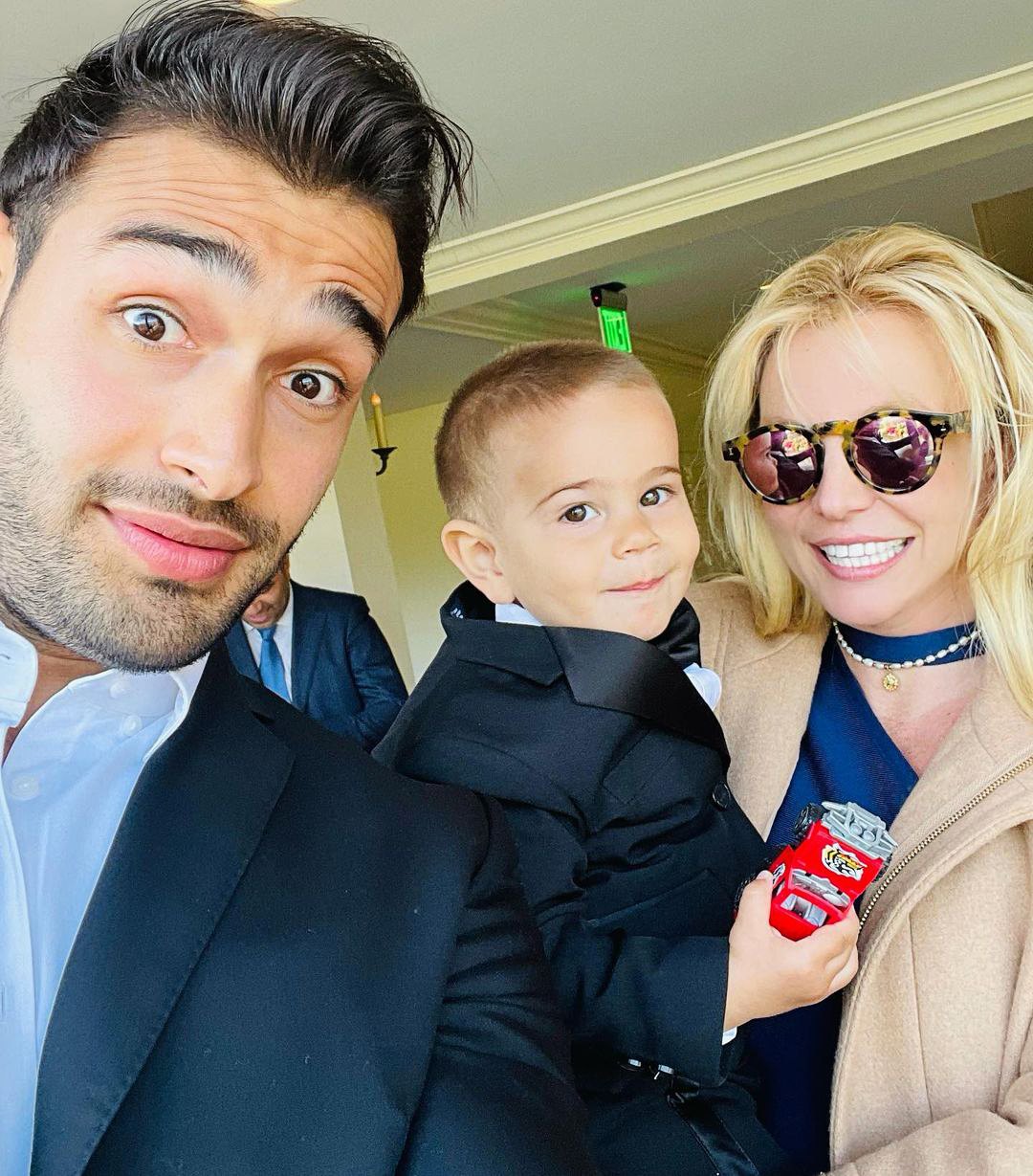 An insider dished to Us that the NCIS alum was ready to start a family with his partner!

“He’s always dreamt of having children and thinks he would be a great father. He’s a natural around little kids.”

And they showed off what could parents they’d be while posing with a child at a friend’s wedding in April, thanking “science” for getting “to dance again” (above). 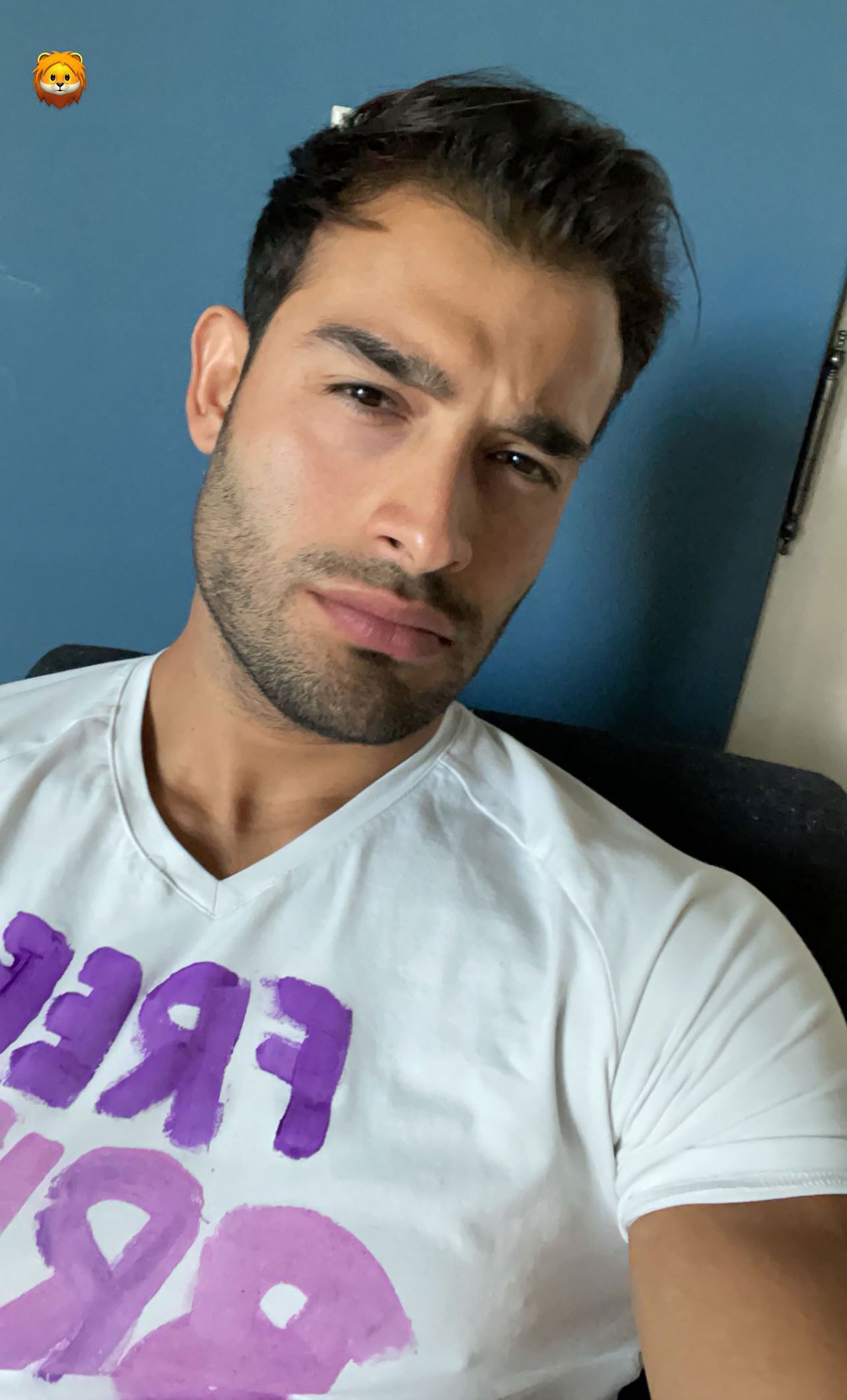 On the day Spears called into court to discuss her conservatorship, the Black Monday star showed off a “Free Britney” t-shirt worn in her honor. He even included a lion emoji!

In a powerful speech to the court, Britney revealed she was ready to start a family and get engaged, but that she had been banned from starting the next chapter of her life. She even claimed her conservators wouldn’t allow her to remove her IUD (intrauterine device)! WTF. Her full account of the depressing time she’s suffered as a conservatee can be read in full HERE, and it just proves how grateful we are that she has someone like Sam by her side through this unfair ordeal!

Reactions, Perezcious readers? What are your favorite moments in this couple’s history?! Let us know in the comments (below)! 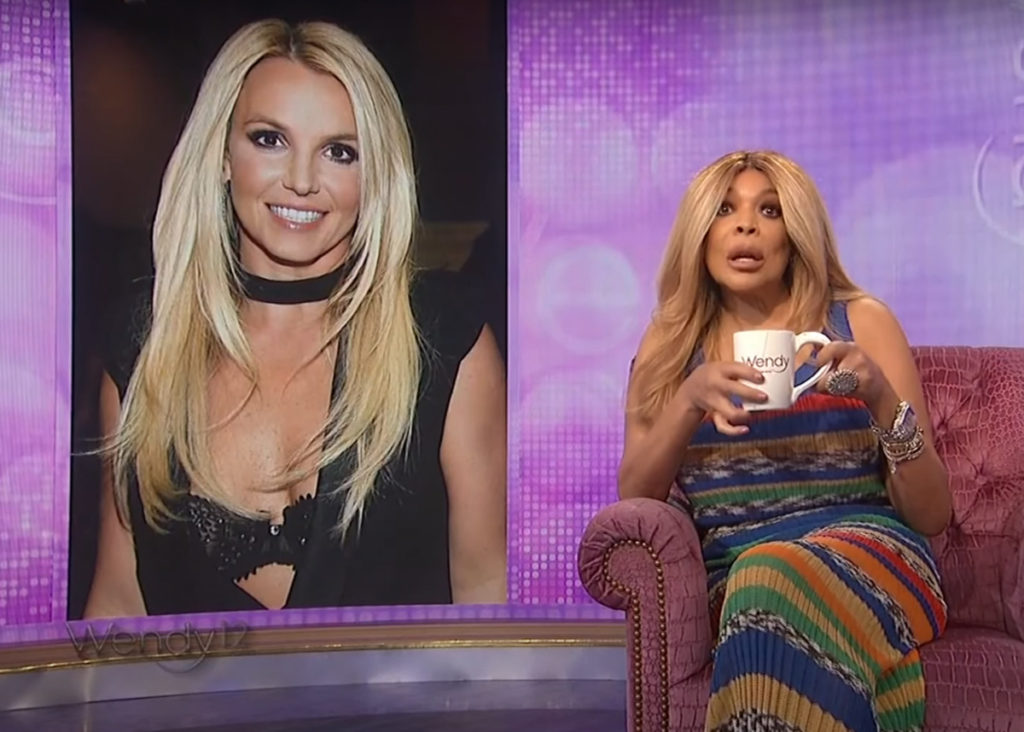 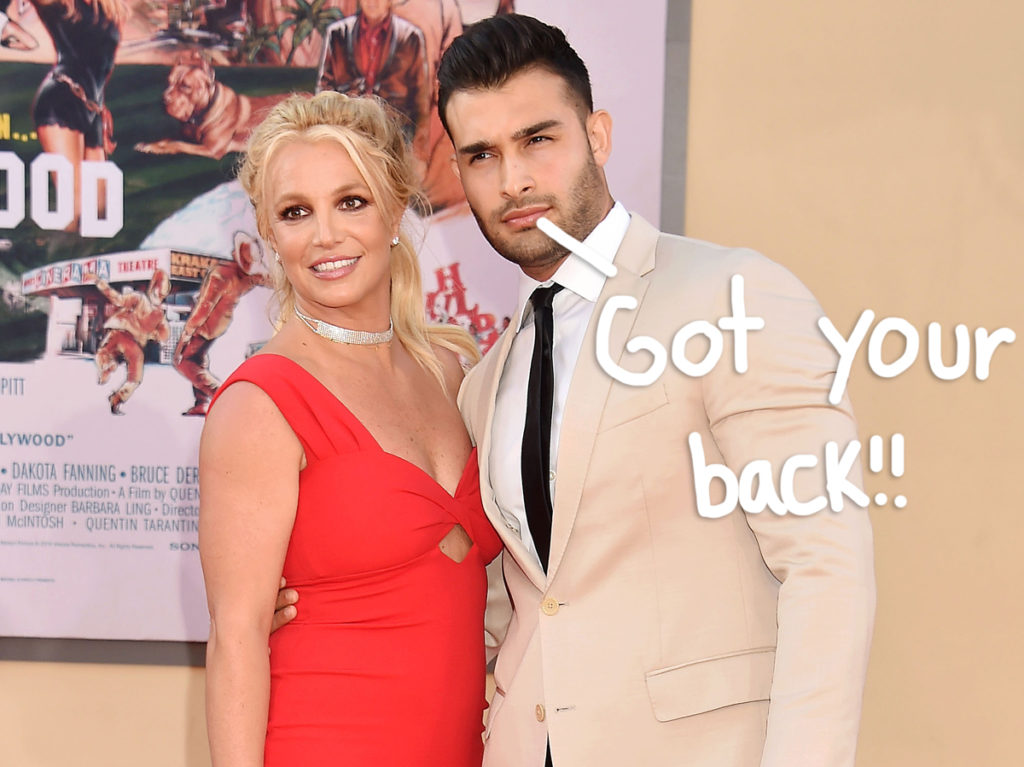 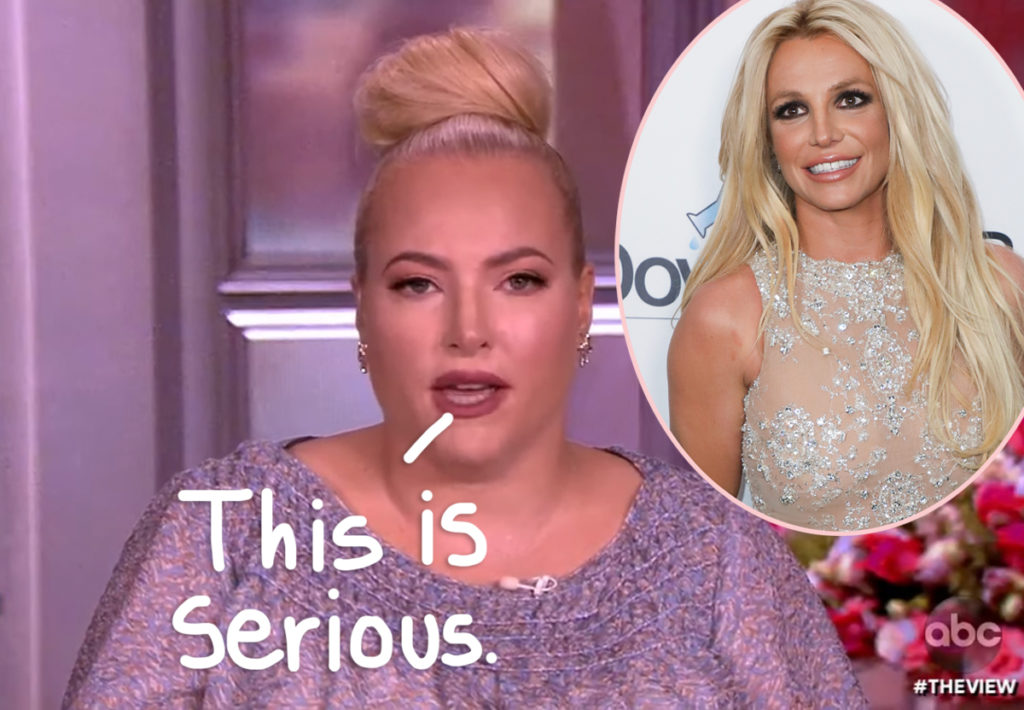 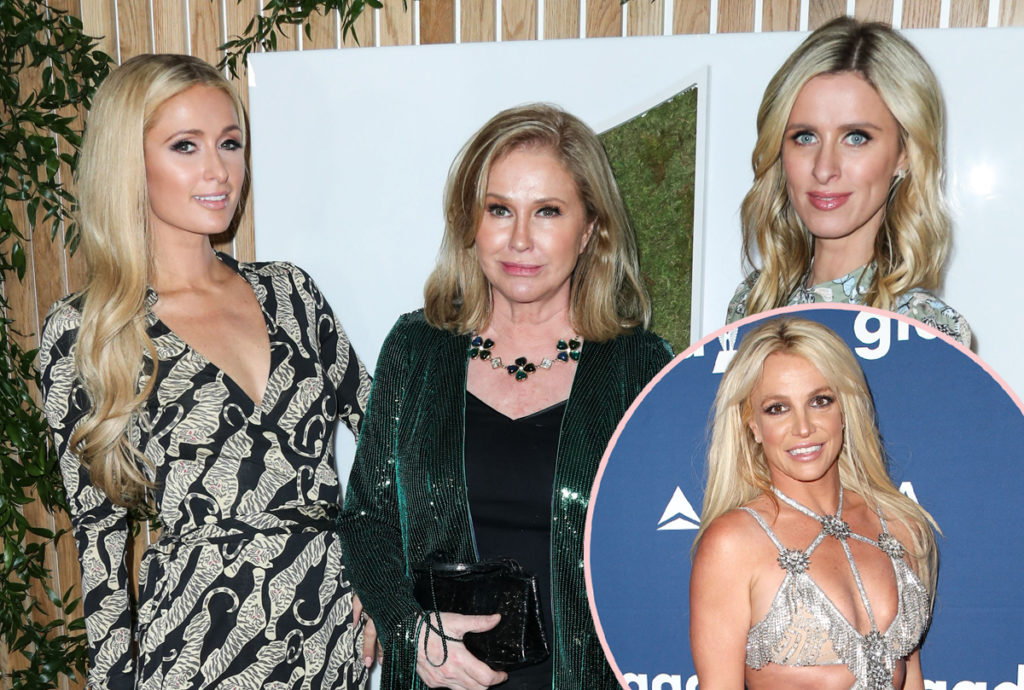