Demi Lovato is getting real about growing up as a child star. In a new episode of the singer’s podcast, 4D With Demi Lovato, Lovato and guest Drew Barrymore exchanged stories about what it was like to grow up famous and how that fame and the money that came with it, impacted their relationships with their families.

Lovato kicked off the interview by commending Barrymore for having such a “good head on her shoulders” despite being thrust into the spotlight at the age of six in Steven Spielberg’s E.T.

“I wanted to have a more in-depth conversation with you because I feel like there’s a lot of parallels between our lives,” Lovato told The Drew Barrymore Show host. “I grew up watching you in movies, so it’s so cool to be able to not only relate to someone who I grew up watching, but also has come out on the other side, I’m not gonna say unscathed, because we all have wounds, but you seem to have a pretty good head on your shoulders.”

Barrymore, like Lovato, also struggled with addiction, getting sober at 13 years old when her mother sent her to a psychiatric institution to get clean.

“I got sober when I was 13 ’cause I had to,” Barrymore shared. “My mom put me in an institution. She didn’t know what to do with me, she created a monster. I was so upset at having my freedom taken away like that, that I just thought it would screw me up for life.”

“I was just mad. I was so mad and I really didn’t understand what anger was,” she continued. “I think through doing the show and having these types of conversations with some of our peers who have come out the other side as well… I think it takes a long time. And I think it would be so nice.”

The world of child stardom panned out a little differently for Lovato, who suddenly became the breadwinner of the family, with Lovato’s every move broadcast on social media.

“I noticed that when I came into the spotlight at a young age, and then was the breadwinner, there wasn’t a manual for my parents to read and it say, ‘Here’s what to do to raise a child star,'” Lovato said on the podcast. “They didn’t get that.”

“So when they would try to ground me at 17, I would say, ‘I pay the bills.’ And I cringe now when I think about that attitude,” Lovato continued. “But when the world is putting you on a pedestal, you kind of think that you could do no wrong. As I’ve gotten older, I see my parents just as big kids themselves.”

As a former child star and mother herself, Barrymore is having her own realization about boundaries when it comes to parenting her daughter, Olive, 8 and Frankie, 7, whom she shares with ex-husband, Will Kopelman.

“I’m having amazing realizations about my own kids and how little I understood what boundaries were. I didn’t have them growing up,” Barrymore said.

Lovato has also begun putting up boundaries, most recently telling Barrymore on her show in April how they’ve discovered it’s never too late to set those boundaries for yourself and others.

“It’s never too late to set a boundary with the world. I learned that,” Lovato told Barrymore. “I’ve continued to set boundaries where it seems like I’ve talked a lot about my life but I didn’t talk about everything. That’s where my boundary is.”

For more on Lovato, watch the video below.

Demi Lovato Opens Up About Their Coming Out Journey

Demi Lovato Says They're More Than 'My Body' In Powerful Note 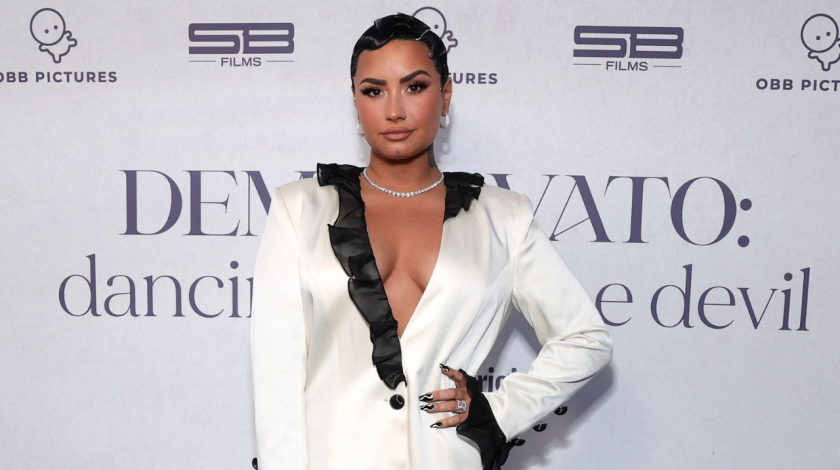