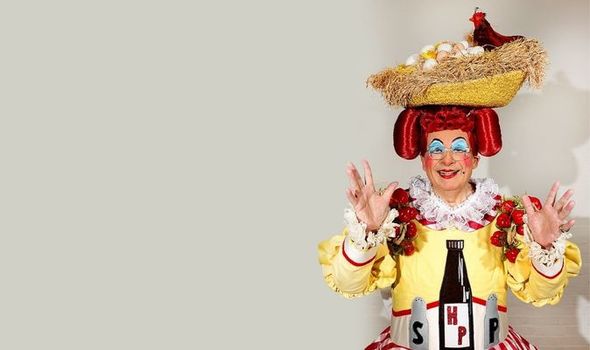 As Christopher Biggins stepped out on to the stage for his annual pantomime performance there was a single empty seat in front of him. For many years, it was occupied by his old friend Barbara Windsor, who rarely missed an opportunity to watch the legendary panto dame in action, when she wasn’t starring alongside him.

But after being diagnosed with dementia in 2014, the former EastEnders actress began to recognise him less and less and, by the time she died almost exactly a year ago, tragically she barely remembered who he was.

Yet he will never forget their friendship, hence the empty seat.

Twelve months on, the star, who lives with his partner of 25 years, Neil Sinclair, in Hackney, east London, is still mourning her loss.

“I miss her terribly. I see her widower Scott quite a lot – he is doing well, all things considered – but it’s a great loss to all of us,” he says, his voice cracking with emotion.

nderful wful le – “She was a wonderful woman and it’s an awful disease because people lose touch with everyone and everything. Tragically that happened with Barbara.

“To this day, I remember her as a very caring and generous person and we had so many laughs together and went on the best holidays.

“I’ll never forget going to places like the Lake District and Venice. It was fantastic and wonderful.

“One of my last and favourite photos of her was when we went to Fischer’s restaurant in Marylebone and we were laughing away, I knew her for so many years through the good times and the bad times.”

The pair met performing in Old Time Music Hall in the Sixties and appeared in many shows, including Guys and Dolls, and panto together.

Having found fame in the Carry On films, Barbara became perhaps best known for her performance as Queen Vic landlady Peggy Mitchell in EastEnders, from 1994 to 2016.

The star died aged 83 following a six-year battle with Alzheimer’s. In a sad twist, her funeral in January took place with limited guests amid coronavirus restrictions. Christopher was one of the 29 mourners – ironically the 30th person got Covid – along with Barbara’s celebrity friends David Walliams, Matt Lucas and Ross Kemp, who played her onscreen son Grant Mitchell in EastEnders.

“It was a terribly sad day. There were just 29 of us because that morning one of the guests got Covid, can you believe it?”

Now he knows Downing Street is accused of hosting Christmas parties when numbers at funerals were limited and people were unable to bury dead relatives and friends, he is upset. “Of course to find that out has been awful; especially given the fact that we couldn’t have a proper funeral for Barbara,” he says.

“There were a handful of us and there were restricted views and it was a problem without a doubt, so I can understand why people are upset now. I am a lifelong Tory supporter and I feel they [the Tories] have shaken my faith and Boris has shaken my faith. I don’t understand why he keeps telling lies and he doesn’t seem to want to know the truth. That annoys me more than anything. If he was more honest, then it would be better.”

Christopher remains sanguine, however, seeing the wider picture. “Quite frankly, I think there are more important things to look at. I really believe we should be sorting our country out rather than haggling over a party. It’s a very strange and horrible situation we are all in,” he continues. “What a terrible time to be Prime Minister, what with Brexit and Covid, he must have so many things to think about. I am not standing up for Boris or the Government but it’s something the opposition has latched on to.”

Even without the loss of Barbara, it has been a tough time for Christopher, who had open-heart surgery a year ago and also had his left knee replaced.

But it hasn’t stopped him taking on the role of Dame Trott in this year’s Jack and the Beanstalk – alongside TV presenter Kiera-Nicole Brennan from Channel 5’s Milkshake and comedian Rikki Jay – at The Orchard Theatre in Dartford, Kent.

“I’m like the Bionic Man,” he jokes. “I’ve had a new valve put into my heart and a new knee put in. It’s not easy getting old! I’ve had issues with my heart for about six years. After panto, I need another procedure to put my heart back into a different beat. I have arrhythmia but, luckily, it’s a small operation. Apparently it is more common than you think.”

Christopher turned 73 on Thursday – not that you’d know it from his schedule.

“I had two shows on my birthday,” he says. “Normally I’d have 18 costume changes but the producers cut that down this year to six and made it easier for me, which has been marvellous. I had my knee operation six months ago and I have been walking around the stage. I am not exactly doing cartwheels but I am getting around. After the operation, I had to do a lot of physio exercises to keep it flexible and my partner Neil has been absolutely wonderful in helping me out. It is so marvellous to be pain-free and it gets better every day. But I don’t think I will be going on Strictly, although who knows if they eradicate panto dames!

What is happening where you live? Find out by adding your postcode or visit InYourArea

“Then again if they do, that will be me over. I’ve been in panto for nearly 50 years. Hard to believe isn’t it?”

Christopher – who has entertained audiences on film, TV, radio and stage for decades and went down a storm as the winner of I’m a Celebrity… Get Me Out Of Here! in 2007 – was diagnosed with type 2 diabetes in 2010, making him reevaluate his lifestyle.

“I cut sugar out of my diet and gave up booze for years. I was on Metformin to keep my diabetes under control but now I don’t have to have any injections. I might have the odd bar of chocolate and glass of champagne but I never go overboard. I honestly don’t drink as much as I used to.”

On Thursday, he can be seen on the BBC’s reboot of The Weakest Link, hosted by Romesh Ranganathan.Taking part in the Christmas special alongside Kym Marsh, Gemma Collins, Hugh Fearnley-Whittingstall, Katie Bottley, Bonnie Langford, Olly Smith and Danny John-Jules, Christopher had a hoot. “Romesh was rather good and he wasn’t too nasty,” says the star, who recalls how harsh “Queen of Mean” Anne Robinson could be.

“I recently did Countdown with Anne – I was Dictionary Corner – she is good, a real pro. But I wonder if there is a need to bring back shows like The Weakest Link? I wish there were more original ideas out there.

But I was keen to go on the show to raise money for Hope, a charity in Calcutta that rescues children from the streets, feeds, educates and houses them. I met the woman who started it years ago and we got on really well. I was so impressed that I got involved.”

Now Neil has retired from his role as a BA air steward, Christopher hopes they will be able to go on a trip in 2022. “He really needs a rest, he has been working so hard to look after me,” he says, smiling.

“At Christmas, we usually go to visit my god-children in Oxford. But because I’ve got panto and I only have one day off, we are having a quiet Christmas on our own.

“I think when you have a heart problem and you have a knee problem, you do look at things slightly differently, and of course with the pandemic, you want to be as careful as you can be.