As head makeup designer of the FX series Pose, it was vital to Sherri Berman Laurence that she represent the ballroom community in the exact right way. Taking place in New York City, Pose tells the story of ball culture in the gay and trans community and the raging AIDS crisis. During a ball, the most exciting characters to work on were the “showstoppers” like Elektra Abundance (Dominique Jackson). But even with the focus on the beauty of ball culture, Pose never shied away from reality. This season expands on the complex and varied appearance of the illness.

DEADLINE: Personally, I love Elektra’s looks the most. Can you tell me about how you handled her character?

SHERRI BERMAN LAURENCE: Well, Elektra in and of herself is just the most fun character I’ve ever gotten to create. Ryan Murphy really cared about her look a lot. It’s kind of like his alter ego, so we put a lot of thought into the elegance of what her character represented. And then, that was in her everyday life, like she was always done. She was always to perfection. There was a lot of on-camera makeup applications with her, like close-ups of her putting on her lips and things like that. There were a few scenes where she was kind of down and out and we had to take her down a lot, but I could count on one hand how many times that happened throughout Pose. 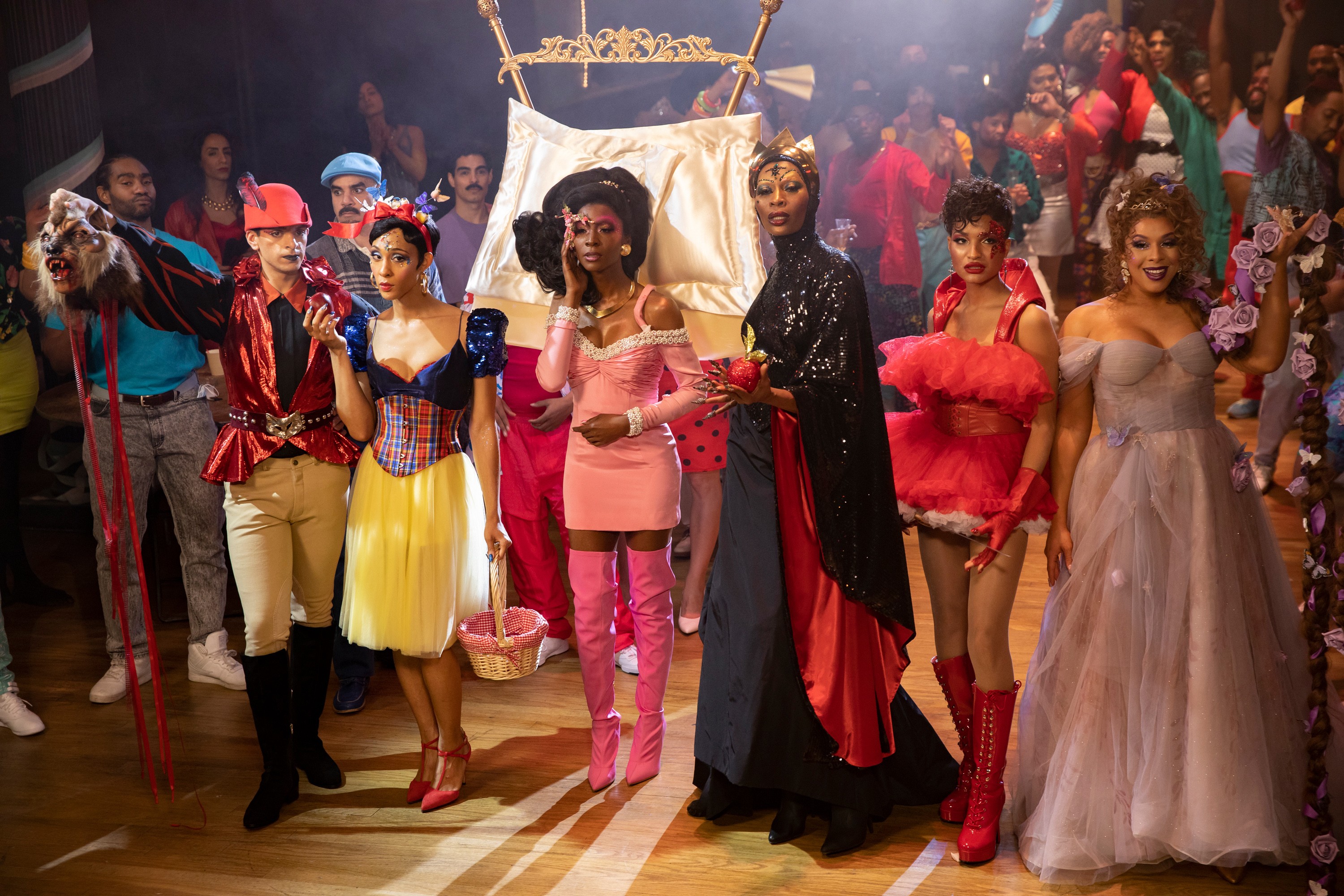 Everyday looks with her were always fun. It was always very prominent, her makeup. We took references from many people to do her looks like Diahann Carroll, Joan Collins, and Grace Jones even. She ran the gamut with inspirations and then, towards the ball scenes, she was always the showstopper. There are many looks that I can pinpoint this season, especially when we did the flashback to the very first time the house of abundance walks the ball. It was a last-minute addition that we were going to do a fairy tale, once upon a time look so we created these looks very quickly with a lot of face appliques that were handmade with very elaborate Swarovski crystals lining the eyes and creating these eyebrows and things for Elektra as the evil queen.

That was the big one for Elektra this season and really all of the ladies because it was so important, showing them at the very first time they walk as house of abundance and it being such a fantastical category. We got to really go all out for that. 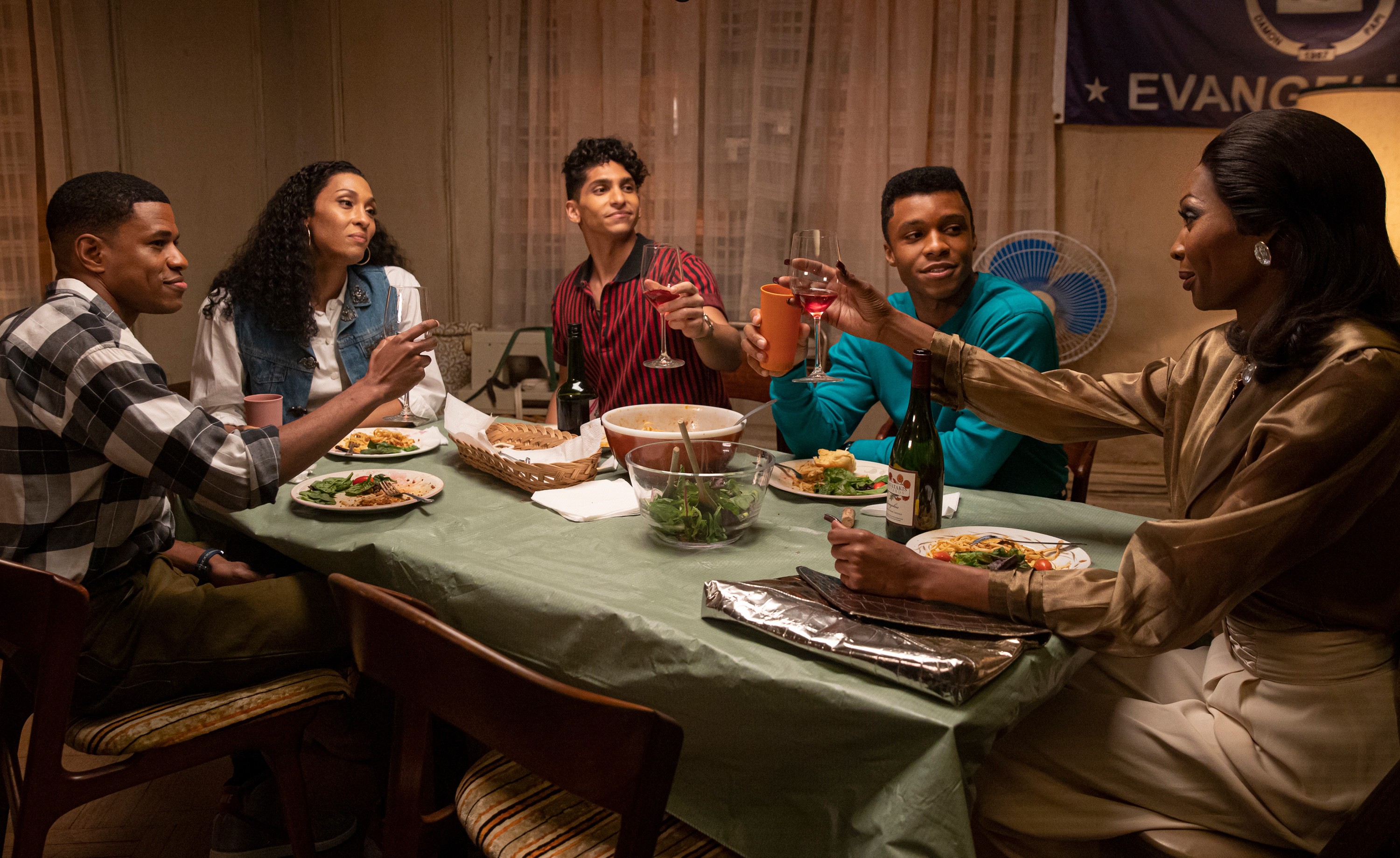 DEADLINE: While each season takes place only a few years apart, I think you can definitely see some shifts in the fashion. How were you able to stay true to each time period?

BERMAN LAURENCE: Well, when we started Pose, all the characters started off one way and as the years and seasons went on, they kind of found their own way into what they ended up being by season three. It was very organic how it, how it happened.

As far as the decades and the time differences with the characters, we started in the eighties and everything was very bright neon purples and pinks and a lot of color blocking, like Cindy Lauper, with three different colors of eyeshadows next to each other on some of the characters. But what I did realize a lot in my research for Pose is that back then, when you think of eighties makeup, you think of the bright neon colors, but it’s very white. That was a very white world.

When you really researched what women of color looked like then, their makeup was more something you could even use today. It was very beautiful, like Whitney Houston. You can look at a picture of Whitney Houston and go, “Oh, wow. I would do that on Indya Moore right now in current times.” So, that was an interesting thing to learn while prepping to start the very first season. With Candy (Angelica Ross), we did a lot of the color blocking and the neons and things like that, which was really fun. And then Blanca (MJ Rodriguez), she wasn’t supposed to really know how to do herself very well. She didn’t pass very well, and so her character kind of morphed. We started off with her shopping for drugstore makeup to make her look as down as possible. Which was actually kind of interesting shopping and buying this really mousy looking eyeshadow palettes from the drug store to use on Blanca in the beginning. But, she’s so beautiful that it was really hard to downplay her and make her look like she didn’t know what she was doing. So, as her character kind of arced over the years, she didn’t put as much effort into herself because of caring so much about getting her family started and caring for her children. So, she kind of morphed as the seasons go on and, by season three, she’s really come into her own. She has a boyfriend, her children are grown, she’s learned makeup from Angel (Indya Moore) in season two. She’s become a lot more put together and glamorous.

Angel’s character arc throughout the years, she started off very edgy, like Lisa Bonet, with coppers and some lavenders and things like that in the beginning. As she became a model and was more of an “it girl” in season two, she became trendier than everyone because she’s in that world. So, we did a lot of red lips and liquid liner and she became more current. The thing that I realized about makeup trends is that the everyday person isn’t necessarily up on the trends, right when they happen. And they stick with them for a few years, so there’s a little bit of lag time. And really when you think about, we started the series in the late ’80s, and then by season two, we were in 1990 and now we’re in 1994. And season three, the arc is very subtle, but if you compare season three to season one, you can definitely see the difference. 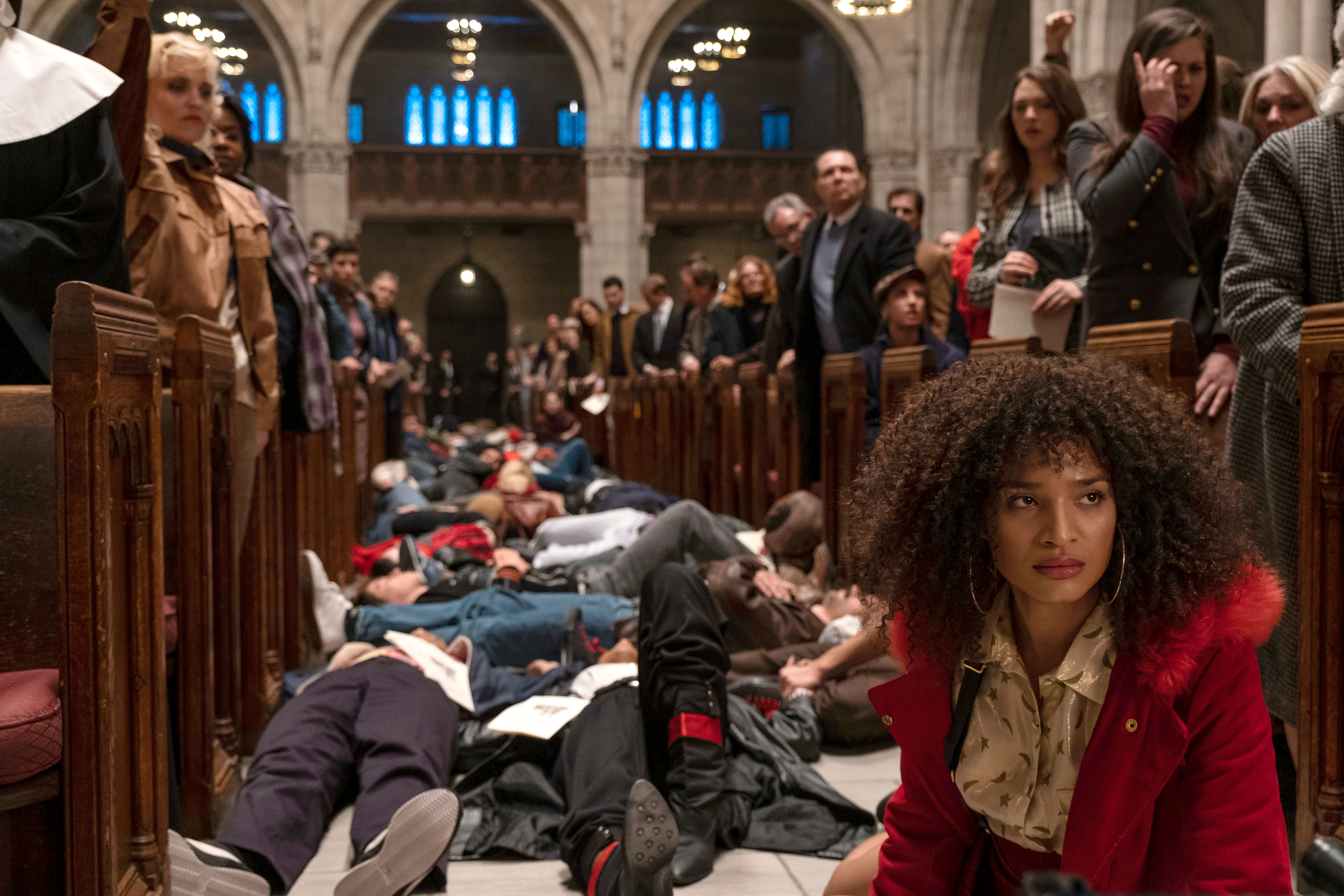 DEADLINE: A major part of the show is showing that glamor of the ball scene, coupled with the gruesome reality of the AIDS epidemic during that time, but you managed to make it so that neither of those extremes really take away from the impact of the other. How did you tackle that challenge of going back and forth between those?

BERMAN LAURENCE: The thing about Pose is that we live in such different worlds. There’s a very dark side of the reality of what was going on at that time, and still going on, with trans women being killed and being clocked and how dangerous that was. Just the world of the sex workers and things like that was a very dark place. Yet, on Pose, we kind of combined that with Elektra and Hellfire, which was more fun because it wasn’t as dark as the reality of other things like when Candy is murdered. So, at any given time on Pose, you could be doing a scene where we’re all dancing behind the monitor at a ball to the next day being in the hospital where someone is dying of AIDS.

It was a very emotional challenge to go back and forth and for the actors as well, to slip in and out of each of those places. I’ve never really experienced that on any show I’ve worked on before either. You definitely had to compartmentalize what you were doing and what was appropriate for how far you were going to go with each of those things. Doing the makeup for the AIDS pandemic… gosh, I feel like in season three there’s a lot of protest and we visit Act Up and all of that again. And we had a lot more range rather than just a scene with someone in the hospital dying. There were different people at the protest who would be in different levels of illness from AIDS and some of the characters on the show as well. So, we really had to kind of play with that a lot and have different levels of makeup with the AIDS epidemic as well.