Comfort TV? James Herriot and Co are still the best baa none: ROLAND WHITE reviews All Creatures Great And Small

All Creatures Great and Small

A shiny steam train puffs its way through the ruggedly beautiful Yorkshire countryside. There are young men in tweed jackets and Fair Isle sweaters, and surly farmers who’ll turn out to have hearts of gold by the end of the episode.

And, because it is compulsory to mention this, there is a young vet with his hand up the business end of a sheep. Yes, All Creatures Great And Small is back.

There was a moment in last night’s episode, as Nicholas Ralph’s James Herriot was bowling along in his 1930s saloon with a dog sitting happily on his lap, when he looked exactly like Christopher Timothy, who played the same role in the 1980s.

It was just the briefest of moments, and probably a trick of the light, but that mistake partly explains the success of the show, which attracted up to five million viewers when the first series was broadcast last year.

For those who don’t remember – or who somehow missed it last year – All Creatures Great And Small follows the fortunes of three vets in the Yorkshire Dales. The BBC’s original series, based on James Herriot’s books, ran for 90 episodes between 1978 and 1990; the signs suggest Channel 5’s remake could last just as long. 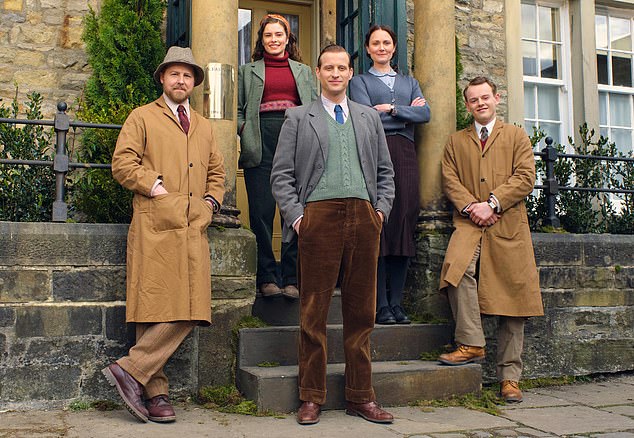 The new ‘modern’ version – at least as modern as the stories allow – won’t upset viewers who doted on Peter Davison’s floppy-haired Tristan and the blustering force-10 gale that was Robert Hardy’s Siegfried.

With Hardy as Siegfried, his colleagues in the surgery were on constant alert, never knowing what he’d do next. Perhaps in keeping with the modern age, Samuel West’s version is kinder and gentler. Apart from anything else, you can actually see why a young vet might enjoying working with him.

I’m not sure I’d have fancied treating a bad-tempered bull alongside Hardy’s Siegfried: too hard to tell which was which.

Episode one of the new series seemed to tease us with the following question: how long will James actually stay in Yorkshire? I think we all know the answer to that, but we were invited to contemplate the idea that he might be lured back to his home city of Glasgow.

He was offered a job there by a modern go-ahead practice. He’d have access to a new-fangled X-ray machine and a ready-made love interest in the shape of a nurse who was very obviously making eyes at him.

Not only that, but his mum wanted him home where his father was struggling to find work. Oh, the guilt. Well, obviously not too much guilt because it didn’t take James long to settle back into cosy Darrowby, where everything always turns out for the best.

When it was revealed that young Jenny Alderson’s dog had been worrying a neighbour’s sheep, causing one to miscarry, we all knew Mr H would sort it out.

Not only was the dog properly trained, but the sheep in question adopted a young lamb who didn’t have a mother. James even managed to patch things up with Helen Alderson (Rachel Shenton) who got engaged to somebody else in the last series. That’s just as well because fans of the show are itching to see the wedding list. 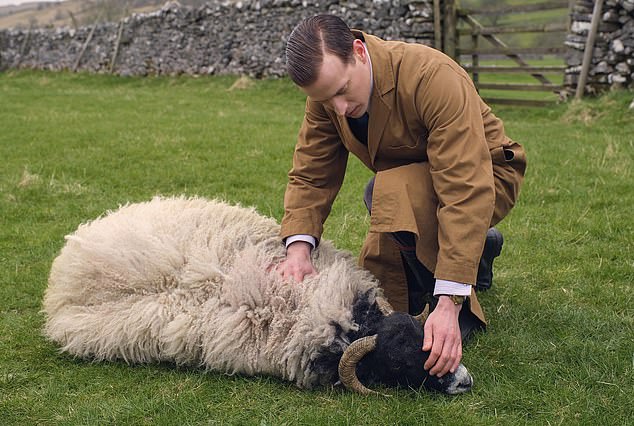 Worrying: James and a sheep. There was a moment in last night’s episode, as Nicholas Ralph’s James Herriot was bowling along in his 1930s saloon with a dog sitting happily on his lap, when he looked exactly like Christopher Timothy, writes Roland White

We also knew that Tristan, who managed to kill a blind lady’s budgie, would somehow manage to cover up the accident – and that his outrageous scheme to replace the bird would succeed.

Thank goodness for Tristan (Callum Woodhouse). I know James is supposed to be the star of the show, but he’s such a goody-goody, isn’t he? Towards the end of last night’s episode, it wasn’t enough for him to heroically save the day in the thorny matter of dogs and sheep. No, he had to deliver a stern-faced lecture to Helen about animals deserving a second chance.

She is a spirited young woman who should have firmly explained to James that he can be a pompous ass. Instead, she went all gooey-eyed and admitted how much she has missed him.

No, give me The Budgie Slaughterer every time. Tristan seems to have stepped straight out of the pages of P G Wodehouse. You could imagine him as resident vet at the Drones Club, getting into scrapes with Bertie Wooster.

Even blustering Siegfried can’t disguise the great affection he has for his little brother. So much so that he can’t bring himself to tell Tristan that the young vet failed his exams in the earlier series. 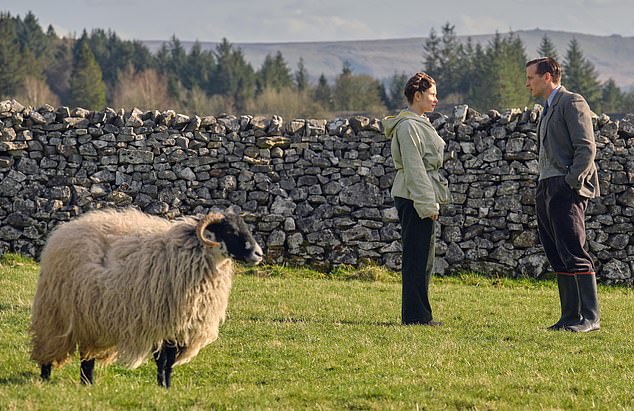 James even managed to patch things up with Helen Alderson (Rachel Shenton) who got engaged to somebody else in the last series (pictured: James and Helen)

The wonderfully resourceful Mrs Hall (Anna Madeley) was left to sort that out. She’d make an admirable Mrs Siegfried. Not that I’d wish that fate upon any woman.

The show All Creatures Great And Small is almost perfect autumn entertainment. As the evenings get darker and the weather grows colder, life in Darrowby offers us the best in comfort television.

Even the colours of the town, which in real life is Grassington in the Yorkshire Dales, have apparently been designed to suggest home-made scones and bread.

I have just one small quibble. Siegfried marches about the house with a pipe clamped firmly between his lips, but he never seems to actually light it.

Has James been lecturing him on the dangers of smoking?