Tori Spelling had a flattering response when she was asked about her eerie resemblance to Khloe Kardashian in a new photo.

Tori Spelling, 48, is “honored” to be compared to Khloe Kardashian, 37. Fans said that Tori bore a striking resemblance to Khloe after the Beverly Hills, 90210 star showed off her new look in a Sept. 2 Instagram photo with her pal Nicole “Snooki” Polizzi, and it only took a few days for Tori to address those comparisons. “I’m honored! Of course, she’s gorgeous!” Tori told TMZ while at the 39th Annual Malibu Chili Cook-Off event on Monday, Sept. 6.

Tori, who hit up the Southern California outing with her husband Dean McDermott and three of their five children, also clarified to the TMZ reporter that she wasn’t attempting to look similar to the Keeping Up with the Kardashians star — but “was honored to get that compliment.” Tori then shared that she had not yet heard from Khloe about the comparisons being made between the two. 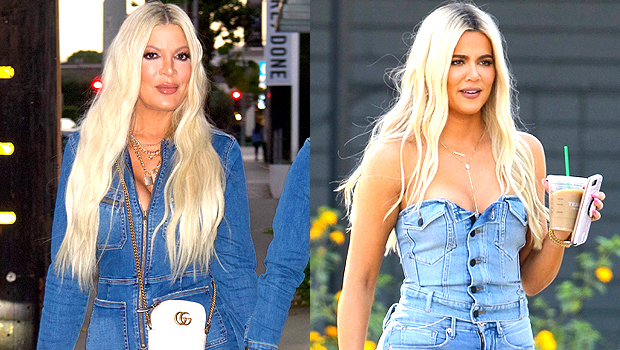 Tori’s Instagram upload with Snooki sent fans into a frenzy about how much she looked like Khloe. In the pic, Tori got dolled up with dark eyeliner and glossy lipstick, while styling her thick blonde hair into styled mermaid waves — a near replica of the look Khloe rocked in Oct 2019. “Kardashians surgeon?” one commenter asked, while another and said, “Whoa thought you were khloe kardashian for a minute.”

Tori’s makeover also garnered her some compliments from her famous pals. The Real Housewives of Atlanta alum Kim Zolciak Biermann dropped three heart-eyes emojis in the comments, while social media influencer Dani Schaffer said, “Holy hotness girls.” Snooki commented as well, telling the longtime actress, “I love you so much!!!!”