On the toughest party night of the year, the ABC mostly delivered the bang the troubled times demanded.

This New Year’s Eve was an even tougher ask than usual, given a prevailing national mood that straddles “What the hell is going on?” and “Thank God that’s over”, along with people everywhere falling sideways with COVID-19 in the days and hours before the traditional blowing up of the bridge.

But fortunately, for every Tom, Dick and Harry sidelined with the virus there remained a Casey, Delta and Missy still in rude health and firing to ring in the new year. 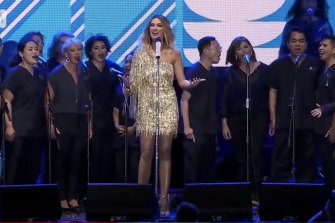 And ring it in they did, with a mostly rousing night of innovation and tradition, straddling that decidedly mixed national mood as well as traversing a wide range of musical genres.

When Tina Arena closed the show with her belting rendition of AC/DC’s Back In Black, she introduced it thus: “A little bit of the Australian songbook for you.”

And that it was, but what the evening’s entertainment showed was just how broad the Australian songbook has become. It’s a near-impossible task trying to be everything to everyone – can one show really bridge the musical and generational gap between Indigenous hip-hop and a cover of Slim Dusty’s Duncan?

When it has no choice – and on this night above all others, the ABC has none – it can indeed.

The night began with a unique Welcome To Country curated by artist Blak Douglas, who cast the opening as an Indigenous reclaiming of the Sydney Harbour Bridge. “We are taking over one of the most famous icons on the planet,” Douglas said, noting that the land it stood on had never been ceded. The 9pm fireworks had a First Nations theme, ending in a live performance from rap duo Barkaa and Dobby. Black Lives Matter T-shirts took centre stage.

The celebration of Indigenous music continued with a later performance by 19-year-old ARIA winner Budjerah, a superstar quickly on the way up.

At the other end of the spectrum there were veterans galore: Delta Goodrem, Missy Higgins, Jimmy Barnes, Tina Arena, Beccy Cole, Adam Harvey and the ever-powerful Casey Donovan, who stole the show as she often does.

A standout was the inclusion of a choir comprised of healthcare workers, who took the stage with Delta Goodrem to sing her song Together We Are One for the second time, after they first joined forces during the early days of the pandemic in 2020.

The pylons on the bridge were adorned with images of nurses, the frontline heroes who were the focus of the night. To that end, none brought the story of the times home better than singer Gordi, who is also a doctor working in Melbourne hospitals during the COVID crisis. Last night, she swapped scrubs for the Opera House stage.

Casey Donovan has become the ABC’s New Year’s Eve insurance policy. She can sing anything better than just about anyone else, including the people who originally sang the songs she’s performing – and she showed us again why she fits her billing as “queen of New Year’s Eve” with killer covers of Higher Love and Born This Way.

Guiding the evening’s proceedings for the fourth year were Charlie Pickering and Zan Rowe, who are smooth as silk in the gig and in each other’s company. They didn’t miss a beat.

It was left to the real veterans of the night to bring us to the big bang at midnight. Jimmy Barnes – with his brilliant wife Jane on backing vocals and then the bagpipes – brought the house down, followed by Tina Arena with a three-song set ending in her surprise AC/DC tribute.

Then it was over to an all-star rendition of George Michael’s Freedom.

“I won’t let you down

I will not give you up…”

We can but hope that’s a sentiment we can take into 2022.

A cultural guide to going out and loving your city. Sign up to our Culture Fix newsletter here.