The former Archbishop of Canterbury who married Prince William and Kate Middleton has revealed the moment he knew their marriage would be a success, as he reflects on their wedding day in a documentary airing tonight.

More than two billion people tuned in to watch Rowan Williams, 70, the then Archbishop of Canterbury marry the Duke, now 38, and Duchess of Cambridge, now 39, at Westminster Abbey on 29 April 2011.

But he said that the happy couple were not phased by the attention surrounding their wedding day, and looked like they were ‘enjoying themselves’ during the ceremony.

He added that he could tell the marriage was going to be a success by the way the pair were smiling each other.

The interview clip was released ahead of the BBC 2 documentary Royal Wedding: A Day to Remember, airing tonight at 7:30pm and was shown on Lorraine this morning on ITV. 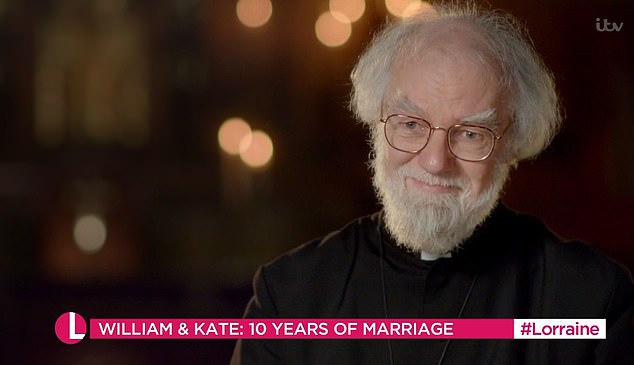 Rowan Williams, the Archbishop of Canterbury, 70, pictured, said he could tell Prince William, 38 and Kate Middleton, 39’s marriage would be successful from the way they smiled at each other on their wedding day, where he married them at Westminster Abbey on 29 April 2011 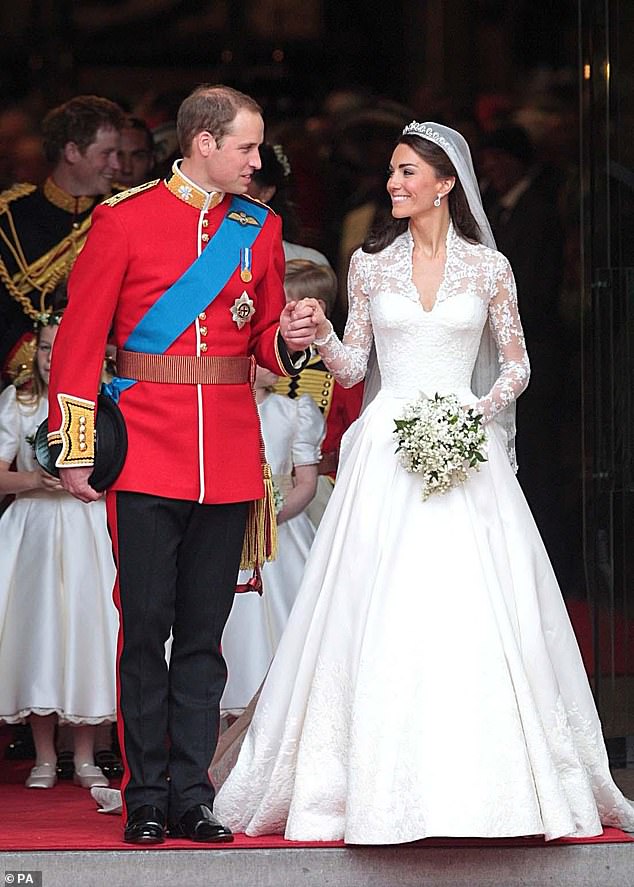 2 billion people tuned in to watch the couple tied the knot, including 36.7 million people in the UK (pictured, Prince William and Kage Middleton exiting Westminster Abbey)

‘They didn’t seem nervous,’ Williams said. ‘Yes, as it happens, a couple billion people were watching, but they were still talking to one another, from the centre, where it matters.

‘They looked as if they were quite enjoying themselves. And when they are smiling at each other, I feel “Yes, yes, it is working” and it did,’ he went on.

10 years on from their big day in Westminster and three children later, the parents of Prince George, seven, Princess Charlotte, five and Prince Louis, three, shared an unprecedented look into their family life to mark their 10 year wedding anniversary yesterday.

The clip was posted to the @kensingtonroyal Instagram page with an accompanying message which read: ‘Thank you to everyone for the kind messages on our wedding anniversary. We are enormously grateful for the 10 years of support we have received in our lives as a family. W & C’ 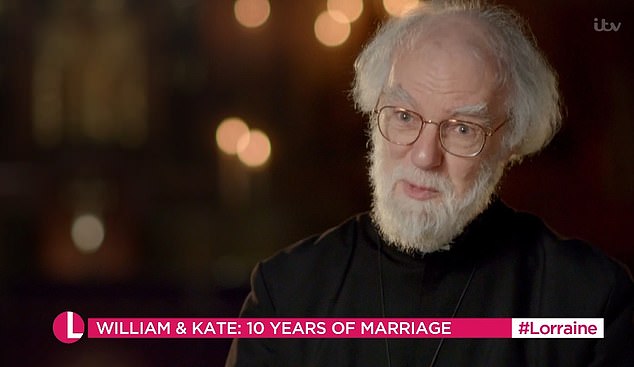 The Archbishop, pictured, said Kate and William didn’t let the billion of viewers phase them on their big day

The man of faith, who can be seen marrying the couple, said William and Kate were not nervous and were there for each other during their ceremony

In the short video, Kate Middleton, 39, Prince William, and their three children – Prince George, seven, Princess Charlotte, five, and Prince Louis, three, can be seen enjoying some downtime in the great outdoors.

Donning co-ordinated casual-wear, the future King and his family are seen climbing the sand dunes on the beach in Norfolk, sitting around the campfire toasting marshmallows in the countryside and playing the garden of their Anmer Hall residence.

The Duke and Duchess of Cambridge chose London-based filmmaker Will Warr to capture their tenth anniversary video montage, who has created branded content, corporate films and ads for big brands including Tesco, Diageo, Red Bull, Uber Eats and Puma.

His work will be instantly familiar to anyone who’s seen the Tesco Food Love Stories adverts.

In one camera shot, the couple can be seen exchanging a joke as they sit on hay bales, while in another, Kate can be seen placing her hand on her husband’s leg, with Princess Diana’s famous sapphire and diamond engagement ring gleaming on her finger. 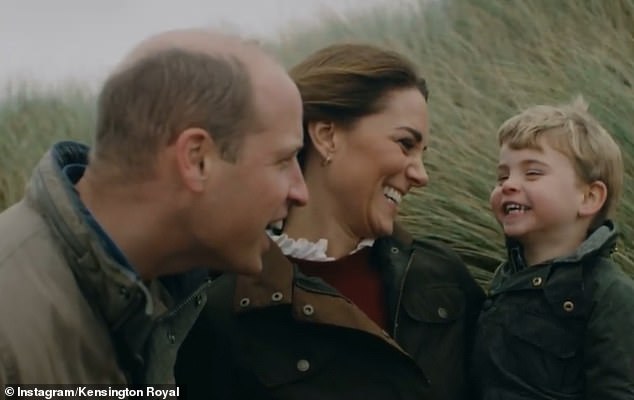 The Duke, 38, and Duchess of Cambridge, 39, have shared an adorable video montage to thank supporters for sending ‘kind messages’ on their tenth wedding anniversary. Pictured, enjoying the great outdoors at a beach in Norfolk 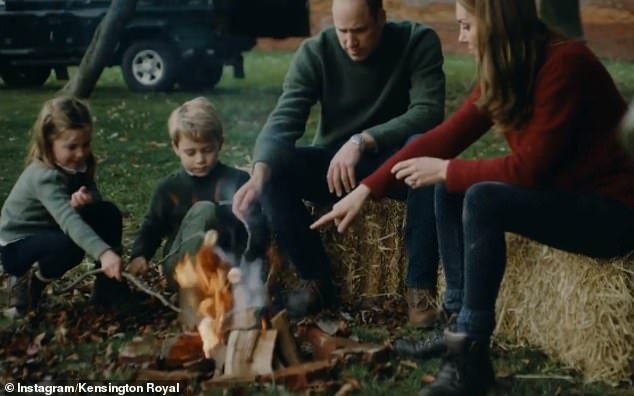 Meanwhile, Prince William can be seen chasing after his youngest son Prince Louis and daughter Princess Charlotte while they scream with joy.

Elsewhere, Kate giggles as she runs after a smiling Prince Louis around the garden at their Norfolk home and according to expert lip reader Jacqui Press, he shrieks: ‘Faster!’

Jacqui also notes that Kate can be seen saying ‘careful’ to him while holding both of his hands as she helps him up through the steep grass.

At the end of the video, Prince George and Princess Charlotte crouch by the fire and toast marshmallows positioned on the end of their sticks.

William warns ‘it will be very sticky,’ Jacqui notes,’ to which George responds: ‘Hot!’ 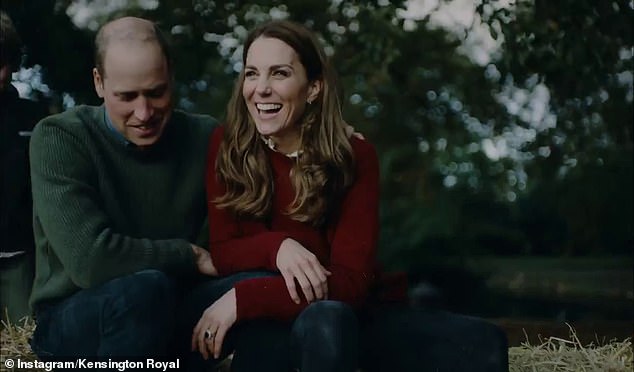 A smiley Kate Middleton oped for a casual look as she perched on the edge of some hay bales next to husband Prince William in the countryside. Pictured, in the gardens at Anmer Hall 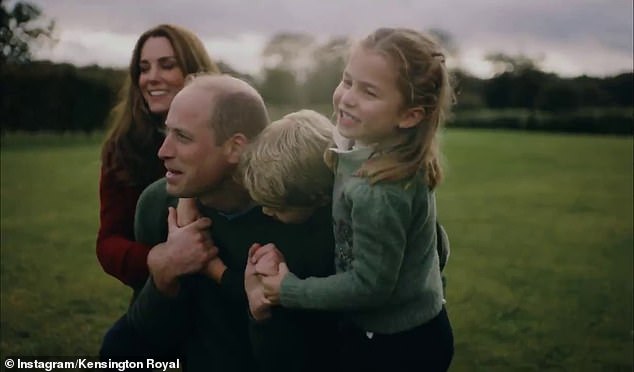 The thrifty family dressed in cosy winter clothes and appeared to recycle the same outfits they wore for their Christmas 2020 card. Pictured, in the gardens at Anmer Hall 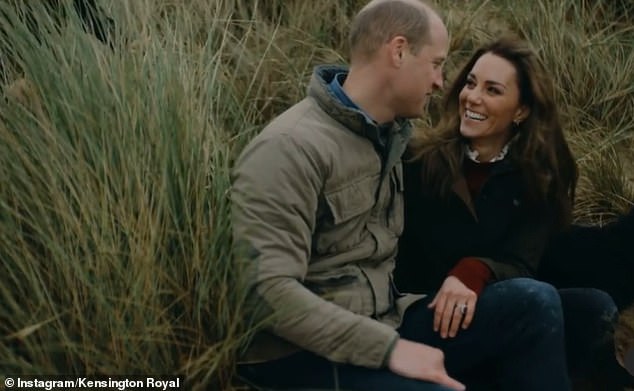 In the short video, Kate Middleton lovingly rests her hands on Prince William’s leg as the pair exchange smiles at a beach in Norfolk

Showing they can embrace both high-end and high street fashion, Kate looked effortlessly elegant in a trendy £299 jacket from Irish premium brand Dubarry, while Prince George, seven, was dressed down in a £12 fleece by British outdoor and leisure clothing company Regatta.

Princess Charlotte, five, looked just as stylish as her mother in an Intarsia Wool-Blend jumper from Ralph Lauren and £259 Penelope Chilvers boots, similar to a pair owned and worn by the duchess for the last 17 years, which she wore on a farm engagement in Darlington earlier this week.

Thrifty Kate recycled the Sézane Margeurite blouse which she first sported with a Troy jacket at an engagement in 2019, and then again with a wine coloured jumper for the Cambridge’s Christmas card 2020. 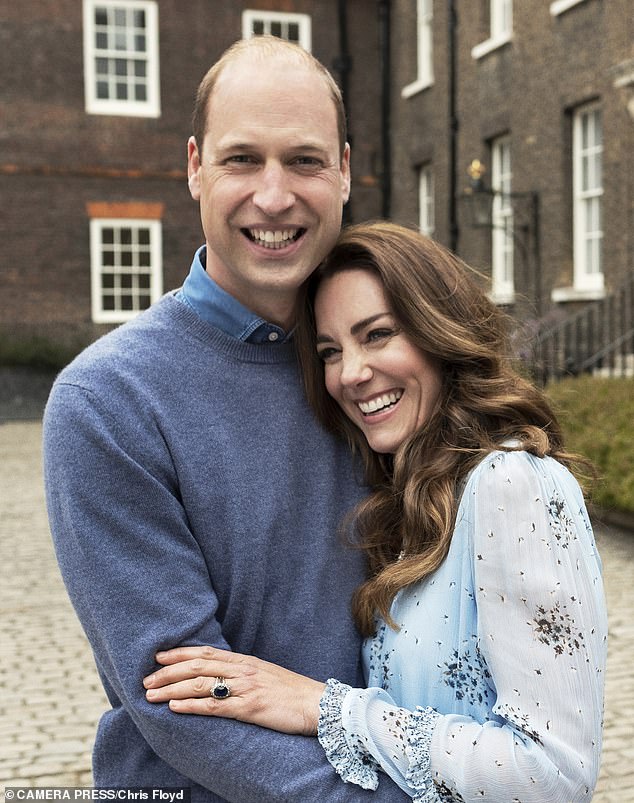 In one of the new portraits of The Duke and Duchess of Cambridge, taken at Kensington Palace this week to mark their 10th wedding anniversary, Diana, Princess of Wales’s famous sapphire and diamond engagement ring can be seen gleaming on Kate’s finger (pictured) 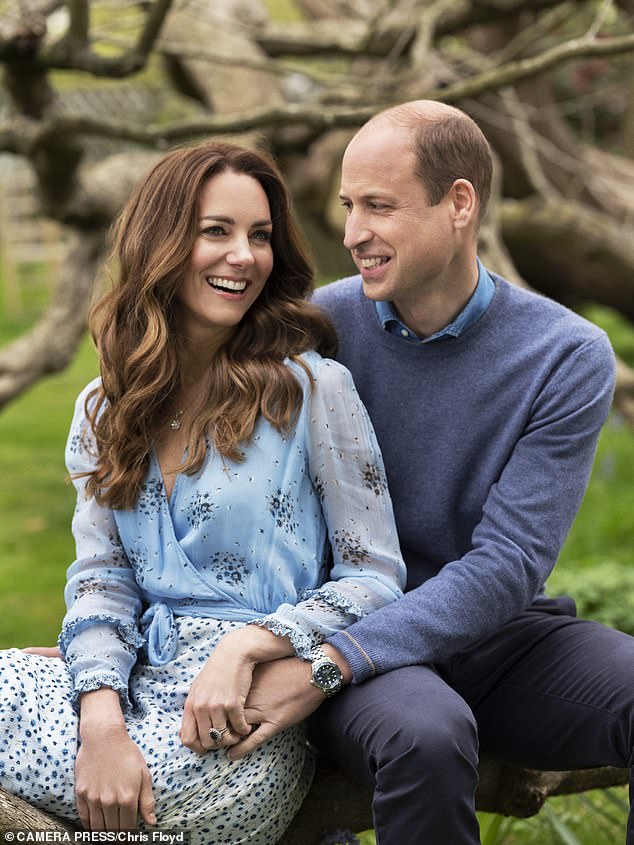 Tender moment: Kate and William hold hands in a new image captured in the garden at Kensington Palace. Pictured, Kate opted for a £195 bohemian-style blue patterned wrap dress by Ghost, while Prince William donned a familiar blue jumper and shirt

Combating the cold weather during part of the clip, the duchess sported her favoured Dubarry Friel Utility Jacket, thought to have cost £299, as well as a stylish £95 hat from Hicks & Brown.

The duchess has a similar pair of the knee-highs, and has owned the trusty £475 Penelope Chilvers boots for at least 17 years, having first been spotted in them at the Blenheim Palace Game Fair in August 2004.

The youngest of the clan, Prince Louis, who was often seen nestled between his parents, sported a look similar to his father’s go-to style.

He sported a blue jumper paired with a checkered shirt underneath and dark trousers, while his older brother Prince George was dressed in a similar earthy tones to his father Prince William. 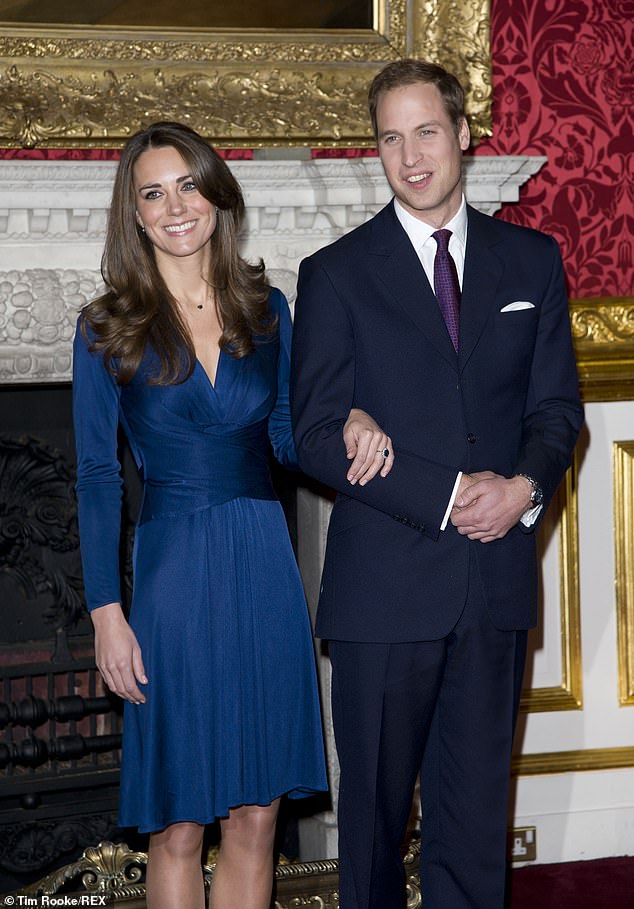 William proposed during a holiday in Kenya in October 2010 after asking Kate’s father for his daughter’s hand following a marathon eight-year courtship. Pictured, in her engagement pictures with Prince William, taken on 16 November 2010 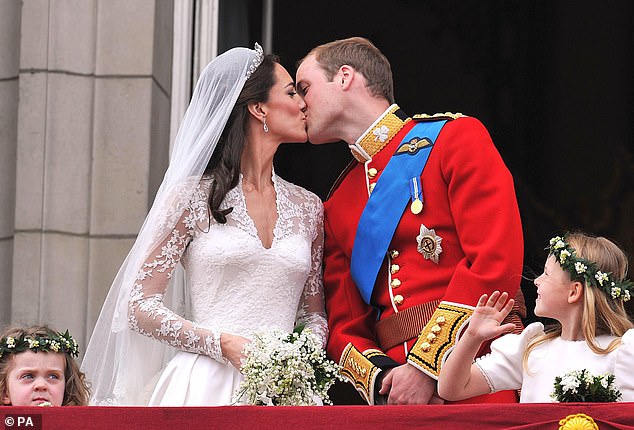 That kiss! Prince William and Kate Middleton shared a very public kissing on the balcony of Buckingham Palace following their wedding at Westminster Abbey

The duke donned a green jumper with a blue shirt underneath, while Prince George opted for similar colours, sporting a £12 fleece by British brand Regatta and a £40 Brown Check Shirt from Trotters.

To mark their tenth anniversary today, the Duke and Duchess of Cambridge have released two stunning new portraits taken this week at Kensington Palace.

Surprisingly, the couple – who tend to play it safe when it comes to official pictures – turned to celebrity snapper Chris Floyd, best known for his Britpop portraits of the 1990s. His subjects have included Oasis, Supergrass and The Verve, as well as Sir Paul McCartney, David Bowie and artist David Hockney.

The photographs are glamorous and glossy, but nonetheless natural. Kate and William are pictured standing in the courtyard at their official London residence as well as sitting in the garden. In each, it is clear the couple have an easy, affectionate confidence with each other.

A youthful Kate is wearing a bohemian-style blue patterned Avery wrap dress by Ghost costing £195. William is smart casual in a blue jumper and shirt.

The duchess’s hair is styled into waves instead of the more formal dark curls she favoured early in their marriage – William would be the first to admit, jokingly, he simply has noticeably less hair.

They are happy to be snapped holding hands – with Princess Diana’s engagement ring gleaming on Kate’s finger.

Other members of the Royal Family were quick to congratulate the couple for the landmark anniversary, with the Queen resharing the image on her official Instagram account, writing:

‘Wishing the Duke and Duchess of Cambridge a very happy wedding anniversary.

It may be their tenth anniversary but it is likely the couple will be doing the school run as normal today. 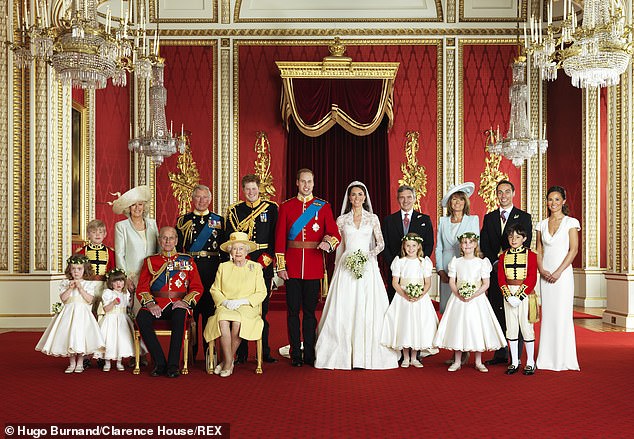 More poignant since the loss of Prince Philip: the couple’s wedding photo, with both sides of their families present, taken by Hugo Burnand in the throne room at Buckingham Palace

Sources say William is ‘extremely proud’ of the way his wife has adapted to the goldfish bowl of royal life.

This year is a particularly poignant time for Prince William, with the Duke set to mark his late mother’s 60th birthday later this summer.

Prince William is set to be reunited with Prince Harry, 36, who lives in a $14.7million home in Santa Barbara, California with wife Meghan Markle and their son Archie, one, for the unveiling of a statue Princess Diana in July.

The statue was commissioned to mark the twentieth anniversary of Princess Diana’s death and recognise her positive impact in the UK and around the world.

It will be installed in the Sunken Garden of Kensington Palace on 1st July 2021, marking The Princess’s 60th birthday.