A company selected by the Morrison government for a multimillion-dollar contract to deliver coronavirus vaccine injections to Australia’s most vulnerable has also been one of the biggest health sector donors to the Liberal Party in the past decade. 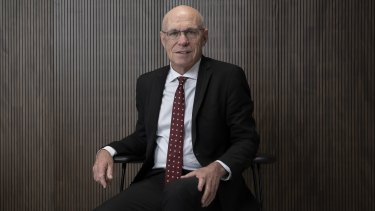 The donations made Sonic, which has been awarded $312 million worth of contracts since the Coalition came to office in 2013, the fourth-biggest donor from the health industry ahead of the 2016 election.

Health Minister Greg Hunt announced in January that Sonic – along with firms Aspen Medical, Healthcare Australia and International SOS – would deliver vaccines to the nation’s 2500 aged care homes and hundreds of disability group homes. The Department of Health declined to make public how much the companies were being paid, with a spokeswoman saying on Wednesday that information was commercial-in-confidence.

This “Phase 1a” vaccination program was meant to take six weeks but, nine weeks after the roll out began, hundreds of aged care homes are yet to receive their first of two jabs. It emerged last week that residents in 93 out of 6000 disability homes around Australia had got their first vaccine injection.

The Age last year revealed Aspen Medical has also donated to the Liberal Party, with its spending totalling $54,000 between 2013 and 2015. Aspen also counted former Liberal health minister Michael Wooldridge among its board members until October 2019.

By comparison, Sonic’s biggest cash donations went directly to the federal Liberal Party in $200,000 payments in 2011 and 2012, and a final $50,000 payment in 2016. Smaller payments also went to the Queensland and Tasmanian branches in these years.

Kate Griffiths is a researcher at the Grattan Institute, which in 2018 released Who’s In The Room, a study of which business groups, unions and not-for-profits were attempting to influence policy in Australia to serve their interests.

Using AEC data from the 2016 election, the report found the health sector was the lowest donor, making up 3 per cent of declared donations. Businesses in other sectors such as mining, property and gambling vastly out spent the health industry on donations to the Coalition and Labor.

Asked about Sonic’s donations to the Coalition from 2011, Ms Griffiths said a one-off donation topping $100,000 was substantial for political parties.

“But the regular donor becomes a whole lot more significant by virtue of their reliability – it would be big enough to care about and big enough to notice from the party’s perspective.”

She said the key question was what donors were looking to achieve by giving to political parties.

“The reasons are everything from blatant ‘It opens doors and gives us a chance to bend ears – it’s the price of doing business’ through to others saying they are supporting democracy. The ones that can back that up more are those that donate equally to both sides at every election.”

The Age approached Sonic chief executive Colin Goldschmidt to ask why the company made the donations and if he believed these donations were appropriate given the amount of work the company did for the government.

Sonic is one of Australia’s biggest healthcare and pathology companies with 127 subsidiaries, including Douglass Hanly Moir and Melbourne Pathology. It announced a profit in the final six months of 2020 of $678 million – up from a profit of $254 million over the same period in 2019.

”Sonic’s strong financial results,” Sonic’s Mr Goldschmidt said, “reflect the millions of COVID-19 tests we have performed across our countries of operation as part of combatting the pandemic.” Sonic’s biggest shareholder is American investment firm Blackrock, which owns 7 per cent of its stock.

The Age asked Mr Hunt whether he had any decision-making role in relation to the appointment of Sonic Health to its various vaccine and pandemic-related contracts since March 2020.

His spokesman said he had not, and that the contracts for vaccine administration had been procured by the Department of Health after a competitive process identified value for money.

“The Minister for Health was not involved in the tender, evaluation, negotiation or awarding of contracts with any of these providers,” his spokesman said.

Federal opposition health spokesman Mark Butler warned that two-thirds of Australia’s aged care residents weren’t fully vaccinated and 99 per cent of disability home residents. “The opening of our economy is dependent on people getting jabs in their arms. The longer the wait the more lockdowns we’ll see,” Mr Butler said.

Lloyd Williams is national secretary of the Health Services Union, which has members working in Sonic’s pathology businesses.

He said these companies often “flatly refuse to negotiate ongoing wage increases – every now and then they will give a small random wage increase”. These did not correlate with the company’s extreme profitability, he said, especially since the pandemic had begun.

“We see them getting these increased payments from government and it’s difficult to understand why they’re not paying their workforce more.″⁣