He helped write the first comprehensive dictionary of American Sign Language and later identified the deaf as a part of society worth examining. 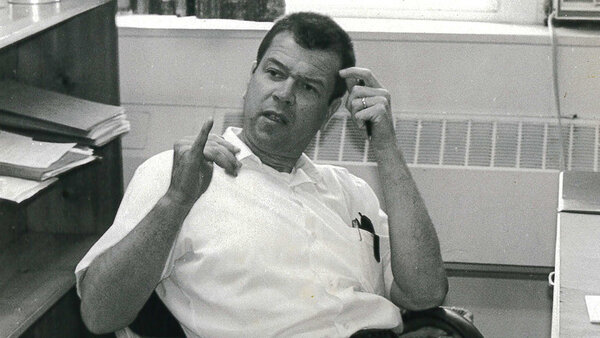 Carl Croneberg, a deaf Swedish immigrant who helped write the first comprehensive dictionary of American Sign Language and was the first to outline the idea of Deaf culture as a distinct part of society and one worth studying, died on Aug. 11. He was 92.

His death was announced by Gallaudet University in Washington, D.C., the only university for the hearing-impaired in the United States, where he earned a degree and spent his entire career. The university did not specify the cause or say where he died.

Mr. Croneberg was a new member of the Gallaudet faculty when, in 1957, the linguist William C. Stokoe Jr., himself recently arrived on campus, recruited him to join his new Linguistics Research Laboratory. Until the late 1950s, many linguists had dismissed sign language as a poor substitute for spoken language, a rigid, imprecise system of gestures that left no room for nuance.

Dr. Stokoe, who was hearing, believed otherwise, though he had gone to Gallaudet with no previous training in sign language and no real exposure to a Deaf community — his specialty was Middle English.

Yet it didn’t take long for him to confirm his hunch. While undergoing a crash course in American Sign Language, he noticed that the signs he was learning in class were sometimes different from what his students were using among themselves.

The difference, he was told, was slang — and in that difference he saw the capacity for A.S.L. to be every bit as capacious as spoken language. Dr. Stokoe committed himself to developing a script, and from that, a dictionary. But to do so he needed colleagues with native-speaker experience.

He chose Mr. Croneberg and a second colleague, Dorothy Casterline, both young instructors at Gallaudet, not only because of their intelligence, but also because, in a way, they were outsiders, too: Mr. Croneberg grew up in Sweden, Ms. Casterline in Hawaii.

That made it possible for them to both analyze the language in a way that Dr. Stokoe could not access, yet also examine its use with a certain amount of detachment.

Mr. Croneberg’s charge was to assess how Deaf people deploy sign language in everyday life and around the country. He traveled throughout New England and the South, interviewing Deaf residents and conducting ethnographic investigations, paying attention to how the language informed their lives.

What he found may not have surprised his research subjects, but it astounded other linguists. He identified significant regional variations; the sign for cheese, for example, was different in Washington, D.C., and Virginia. Catholics and Protestants had different words for the same religious objects. And he found different dialects among old and young, and between Black and white people.

“The community of Deaf people who use sign language and who have more or less frequent social contact with each other extends all over North America,” he wrote. “But the whole divides into local and regional groups which can be mapped geographically.”

Mr. Croneberg published his results as two appendices to “A Dictionary of American Sign Language on Linguistic Principles” (1965), which he wrote with Dr. Stokoe and Ms. Casterline, and which became a seminal text among Deaf scholars.

“Stokoe would not have been able to do the work without his colleagues, Carl and Dorothy,” Pamela Wright, who teaches linguistics at Gallaudet, said in an email. “It was a perfect mix of skills that pulled together to study A.S.L. as an authentic language. Stokoe didn’t know signs, he was still learning, and Carl and Dorothy were his connection to the community.”

In recognition of their contributions, Gallaudet presented Mr. Croneberg and Ms. Casterline with honorary degrees in May 2022.

“Deaf scholars like the ones who stand before us today are enjoying opportunities for a better life thanks to the painstaking research conducted in the 1950s and early 1960s by Mr. Croneberg and his colleagues,” the university said in announcing the awards.

Carl Gustav Arvid Olof Croneberg was born on April 26, 1930, in Norrbacka, a small town about 30 miles northeast of Stockholm. Deaf from birth, he was sent by his parents to a specialized school, where, in addition to learning Swedish sign language in class, he taught himself written English and German through a correspondence school.

A chance encounter with Leonard M. Elstad, the president of Gallaudet, who was traveling in Europe, persuaded Mr. Croneberg to come to America to study at the university, according to research by Carey Ballard, a doctoral student in linguistics at Boston University. Mr. Croneberg arrived in 1951 and graduated with a degree in English four years later.

He was immediately hired as a junior faculty member while he took graduate studies at the nearby Catholic University of America. He received a master’s degree in English there in 1959, but despite high grades and Dr. Stokoe’s strong recommendation, he was not admitted to the university’s doctoral program in anthropology because its director thought it would be too difficult for a deaf person.

He continued to teach English at Gallaudet, and over time became an inspiration for a new generation of linguists and scholars of Deaf studies, who created programs and departments at Boston University; California State University, Northridge; and other institutions.

Mr. Croneberg retired in 1986. Survivors include his wife, Eleanor (Wetzel) Croneberg, and his daughter, Lisa Croneberg.