DAN HODGES: The inconvenient truth for Boris’s critics is that he did follow the science – and it’s working

When the coronavirus crisis began, Boris Johnson and his Ministers wanted to follow the science.

But thanks to the paranoia and false pride of the Chinese government, there was precious little science to follow.

‘We found it very difficult to get any hard information out of China at the beginning,’ a Minister told me.

‘When we offered to send help or expertise, it was turned down. And when information did start to emerge it was just dripped out via the World Health Organisation.

‘The attitude was basically, ‘this is a Chinese problem and it will have a Chinese solution.’ 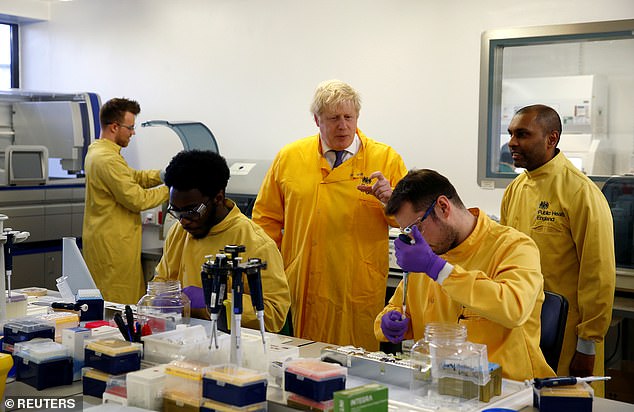 Over the past week the Government’s Covid-19 response has come under sustained assault.

The Cabinet was too slow to appreciate the enormity of the looming pandemic. When they did finally react, they moved with all the assurance of the Keystone Cops.

And at every stage, narrow political ideology – a desire to protect the markets and unleash ‘herd immunity’ on an unsuspecting public – drove their strategy.

It’s a lie. Not a false narrative or partial perspective, but a destructive fiction.

Because the truth is this: When the Chinese wall of silence finally collapsed, Boris and his Ministers had no choice but to follow the science.

There is a fashionable pose currently on display at Westminster – or the virtual sphere that constitutes Westminster in lockdown – called the Inquiry Feint.

A politician or other detractor of the Government will solemnly declare, ‘we have to wait for the public inquiry before drawing conclusions’, before then immediately concluding the coronavirus response has been criminally negligent and Ministers are little better than war criminals.

But there is no need to wait for any inquiry. The facts that destroy the main case against the Government are already on display.

All that is required is for people to raise their gaze, and drop their prejudices, for long enough to actually see them.

The hindsight so beloved by Boris’s critics is not needed.

Currently sitting on the Cabinet Office website are the official documents produced as the early stages of the crisis unfolded.

It shows what Ministers were advised, and why that advice was furnished.

And it exposes each of the primary lines of attack on them to be a deliberate and malicious falsehood.

Take the argument circulating last week that the PM’s reluctance to introduce an early lockdown was driven solely by a desire to protect trade.

Summaries of the Government’s advisory panel – the Scientific Pandemic Influenza Group on Modelling (SPI-M) – are clear.

On March 4, Ministers were advised that ‘full household isolation will have a disproportionate impact on poorer families, reducing family income, increasing costs (heating, electricity, food delivery) at the same time as preventing access to free school meals and other social services provided via schools’.

He was holding off because he was trying to protect Britain’s share of the 500million people Oxfam has warned will be pushed into poverty by the Covid-19 pandemic.

Then there is the argument that Ministers were simply too complacent to rush the nation into the lockdown that would have saved countless lives.

If only we’d reacted like they did in Hong Kong or mainland China, all of this could have been avoided. But again, the advice given to Ministers is clear.

As late as February 26, they were being warned by their advisers that a full lockdown ‘might have a similar impact on that seen in Hong Kong or main land China – reducing the [virus] reproduction number to around 1.

However, this would result in a large second epidemic once measures were lifted.’ Yes, some lives could initially have been saved by forcing Britain into the pain of a draconian and premature incarcera­tion.

Only for a second wave to decimate the nation a few months later. But the most shameful and vicious lie relates to the continuing fantasy of herd immunity.

This still holds that Boris and his senior advisers decided to ‘take it on the chin’, let the virus run amok and allow natural selection to do its work.

The conclusions of a SPI-M meeting on February 26 reveal the truth.

Ministers were advised: ‘In the event of a pandemic, without action, the NHS will be unable to meet all demands placed on it. Demand on beds is likely to overtake supply well before the peak is reached.’

A policy of herd immunity would indeed have meant the survival of the fittest. Because everyone else would have been dead as the NHS collapsed around their ears.

To believe Boris Johnson signed off on such a policy, you cannot just embrace the liberal caricature of him as an entitled dilettante.

Or a hard-Right ideologue. Or even an indolent patsy of that sinister Machiavelli, Dominic Cummings.

You have to believe he is a fullblown psychopath. One who authorised the deaths of hundreds of thousands of Britons, and the total implosion of the NHS, all in the certainty the subsequent political reckoning would drive him and his party from office for a lifetime.

There is a popular and clever line circulating that claims Boris is ‘hiding behind his advisers’.

But it’s a conceit that unwittingly reveals the reality. Boris did follow the advice of his advisers.

And the strategy they advocated has worked. We were told the plan was to time the lockdown so the virus peak would be suppressed – squeezing the sombrero – NHS capacity would be safeguarded, and the pandemic’s worst effects could be mitigated.

And that’s exactly what happened.

For the past 40 years we have been inculcated with the same mantra: ‘The NHS is being underfunded. Its staff are demoralised. The entire service is on the brink of collapse.’

But when faced with its biggest challenge for a century, the NHS did not collapse. The staff and their institution stood strong.

‘We are 14 days behind Italy,’ we were told, as the hospitals in Lombardy started resembling wartime field hospitals. But we were not.

And Boris’s decision to listen to his advisers – rather than bar-room epidemiologists – was the key to that.

As a No10 adviser said: ‘You can see lockdown is starting to sag at the edges a little. Imagine if that had happened two weeks ago just as we were approaching the peak. Imagine the lives that would have been lost.’

Imagine something else. Go back to the start of the crisis. Boris Johnson announces a national lockdown on a scale never before seen in peacetime.

‘Do your senior medical and scientific aides back this decision,’ he is asked.

‘No,’ he replies, ‘they do not.’ He would have been dragged out of No10 by men in white coats.

‘When this is all over, we will have our inquiry. It will show Boris and his Ministers did indeed ‘hide behind their advisers’.

And each and every one of us should thank our God that they did.