Defence has confirmed for the first time it is looking at alternatives for submarines if the troubled $90 billion deal with French company Naval Group does not go ahead.

Department secretary Greg Moriarty told a Senate estimates hearing on Wednesday he had been thinking about the issue over the past 12 months although he stressed the government wanted to go ahead with the existing contract. 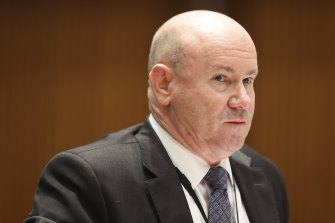 Since then, there have been tensions in the relationship over cost and timeline blowouts and disagreements over the commitments to meet local contract requirements.

The first of the 12 submarines is not scheduled to be built until the early 2030s.

Mr Moriarty told the committee “it became clear to me that we were having challenges with the Attack Class program over the last 15-12 months”.

“So of course, you do reasonably prudent thinking about what one of those options might be or what you might be able to do if you are unable to proceed,” he said.

Mr Moriarty said he had held several discussions with senior officers about what that might involve.

“I wouldn’t refer to it as Plan B, I’d say prudent contingency planning,” he said.

However, Mr Moriarty said the government was “absolutely committed to trying to work through with Naval Group and build a regionally superior submarine in Adelaide”.

Prime Minister Scott Morrison is expected to discuss the submarine project with French President Emmanual Macron when they meet in Paris later this month.

Opposition defence spokesman Brendan O’Connor called on Mr Morrison to explain what changes could be made to the largest Defence contract in Australia’s history.

“There has been no certainty about the future submarine for some time, yet it is only today we are hearing confirmation that the government is looking at other options for our submarine capability,” he said.

It has been reported Australian officials are now considering German options including submarines from TKMS and Saab.

Mr Moriarty would not comment on specific options but said, “it’s fair to say we’re looking at capability pathways,” when Labor senator Penny Wong asked whether Defence was engaging with other suppliers.

“I’m not going to go into those pathways but the Chief of Navy said that yesterday we’re not looking at the TKMS,” he said.

Commodore Tim Brown, who was previously the director-general of submarine capability and is now in a role looking at overall force structure requirements, repeatedly told the senators he could not discuss whether he was involved in considering alternatives because everything he did in that previous job was classified.

Independent senator Rex Patrick eventually lost his temper at this evasion, telling Commodore Brown everything he did was paid for by taxpayers.

“We have an oversight role and we are entitled to ask questions and we expect answers,” the senator said.