Why you should re-think grooming your own dog in isolation: Mash the Pomeranian’s disastrous haircut leaves thousands in stitches

A dog owner has brightened the days of thousands of Australians with her disastrous attempt to cut her Pomeranian’s fluffy coat.

Sydney jewellery designer Hermione Underwood decided to trim her pup Mash’s hair after groomers and other non-essential services closed across the country on March 23, under strict social distancing laws designed to slow the spread of COVID-19.

Keen to keep her ‘fur baby’ looking his best, Ms Underwood, who is a close friend of Australian model Lara Bingle, took matters into her own hands – but the home makeover didn’t quite go to plan.

She shared two Instagram photos of the 13-year-old Pom taken before and after his haircut went awry, telling fellow dog owners to ‘take it from Mash and wait until the professionals are back’. 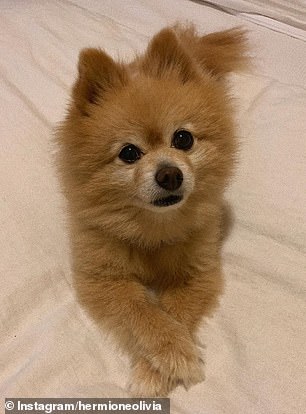 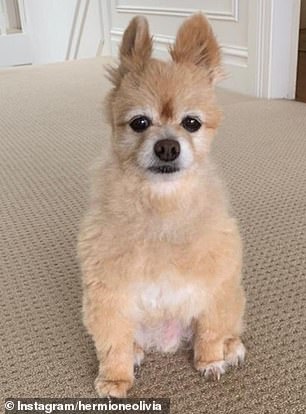 Sydney jewellery designer Hermione Underwood tried to trim her Pomeranian’s fur after groomers closed nationwide, but Mash (pictured before and after his haircut) looks less than impressed

The first photo shows him sitting on a bed, paws crossed and covered in a thick ginger coat which is typical of Pomeranian dogs.

The second shows an almost unrecognisable Mash shorn of his signature fur and staring dejectedly at the camera, sporting a decidedly thinner coat which has been closely shaven to reveal a shade of weak blonde hair beneath.

Almost 3,400 people have ‘liked’ the photos since they were posted last Tuesday, with one woman saying she ‘spit her smoothie out’ when she swiped to the second shot.

But Ms Underwood isn’t the only ‘dog mum’ struggling to master canine grooming skills in lockdown.

A Canadian woman had the same idea and set about shearing her silken-haired Havanese last week, realising too late that the technique is a lot harder than it looks.

‘I’ve been laughing so hard for two days straight now, I probably woke up all my neighbours. I had the same thought – “that can’t be too hard – watched some YouTube videos and then thought: oh no, it is so difficult, what am I doing!’ she said on Instagram.

An Australian woman chopped off her pooch’s coat in a such a dramatic fashion a few years ago that her vet asked if the animal was seriously ill.

‘When she took a look at him she asked “does he have a disease?” Now every time I cut him my fiance asks “can you give Sam a disease again please?”‘ she said.

‘Fortunately, I haven’t done such a bad job of it since then. Your dog looks just as cute and probably enjoys so much less hair!’

Mash became an overnight celebrity after his botched haircut caught the attention of newspapers in the UK, US and Europe.