DRONE footage has revealed the first look at the new Avengers Campus being built at Disneyland California.

The new attraction was due to open later this year on July 18, but construction work has now been paused due to the lockdown.

New launch dates for the Marvel-themed land are yet to be given, with it also unclear when the Disney parks will open themselves.

The new images have captured the current works being done at the park, with the new land being the most exciting new build.

One picture reveals the Quinjet, used by the Avengers, covered in plastic sheeting.

This will be on top of the Shield HQ, the main attraction in the new land where the Avengers will look for "new recruits".

Also spotted is the beginning of Pym Test Kitchen, a restaurant which will feature weird new meals and snacks for guests at the park.

A bright red building which will be the new Spiderman ride is the furthest along in being constructed.

The “WEB Slingers: A Spider-Man Adventure” ride will see guests wear 3D glasses and use new technology to sling their own webs at robots.

New technology means all you have to do is extend your arm and fire the web, just like Spider-Man does.

Phase 2 of the new land is expected to include a second ride based on a Quinjet ride to Wakanda, while the attraction hopes to open in 2021 at Disneyland Paris and 2023 at Disneyland Hong Kong.

Other drone footage shows the partly-built Mickey and Minnie's Runaway Railway, which opened at Disney World in March,  as well as refurbishment on the King Arthur Carrousel and the Haunted Mansion. 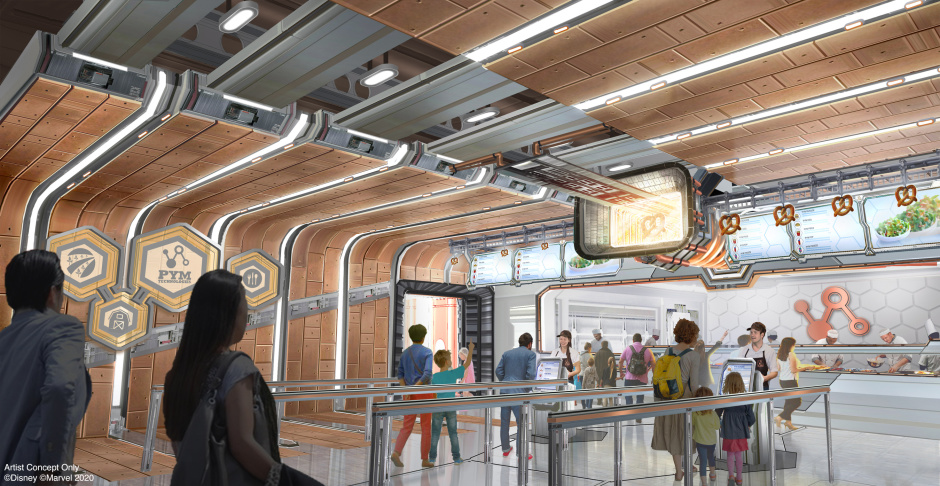 However, the parks are facing million pound losses every day they are closed, with concerns as to when they will be able to re-open.
Disney World could open as soon as June, according to the Florida authorities, although park experiences will be very different.

Guests will most likely have to remain six feet away from each other while queueing or may have to use virtual queuing instead.

Park staff will wear masks while cast members will have to remain an arms length from kids while interacting.

Tickets and annual passes are also likely to become more expensive – not only will the parks need to recoup the lost earnings, but limited capacity levels mean the parks will struggle to make a profit.

There are also fears that parks may not be able to open until 2021 due to social distancing measures making them "unprofitable".

UBS analyst John Hodulik explained that the parks may not be able to resume normal services until a vaccine is made widely available, with travel restrictions also playing a part.

Mr Hodulik explained in his report 'The Eye of the Storm': "[The] economic recession plus the need for social distancing, new health precautions, the lack of travel and crowd aversion are likely to make this business less profitable until there is a widely available vaccine."