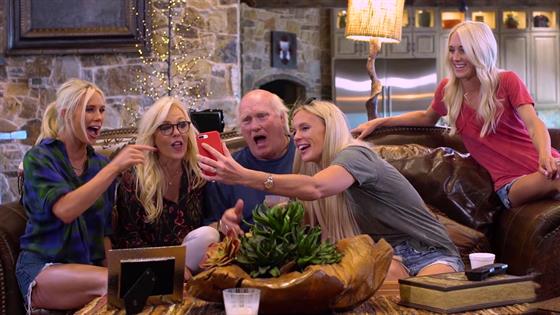 Yes, that’s Terry Bradshaw! The Bradshaw Bunch—which will follow his life in rural Oklahoma—is premiering on E! this summer, and you can get your first look at the series with this exclusive trailer.

In the clip, you’re not only introduced to Terry himself, but also his wife, Tammy.

“Without Tammy, my dad would literally lose his mind,” says Rachel, one of Terry’s daughters. “But she might give him a heart attack with all those pranks.”

But Tammy’s antics—from popping around a corner to honking a car horn, all in the name of scaring Terry—are just one part of the madness that makes up the Bradshaw household. Rachel, along with Terry’s other daughters, Erin and Lacey, are major contributors themselves!

“She got a boob job,” Terry says to Tammy, referring to Erin. “Why hasn’t she told me?”

And cue Erin talking about said boob job to her sisters. Meanwhile, Terry pulls out a bible and starts to pray: “Dear lord give me the strength to talk to Erin about her boob job…”

At the end of the day, though, all of the Bradshaw women seem to adore Terry.

“He is the sweetest, most loving dad ever,” Rachel says, adding that he’s “a really good ‘girl’ dad” in particular.

The Bradshaw Bunch is coming soon to E!