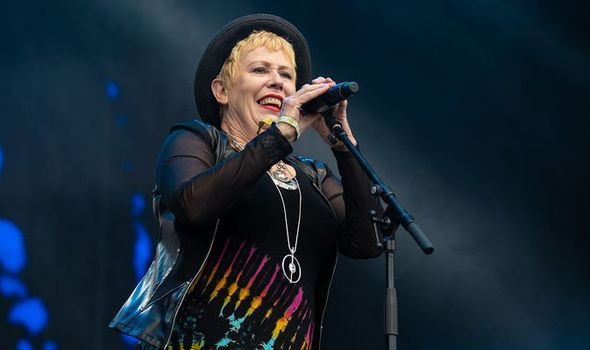 “I looked up and saw Israeli jets,” the 80s pop-punk icon tells me. “I started to row to the shore very fast, and if you’ve ever rowed a dingy very fast, you’ll know that it folds up like a concertina. All anyone could see was a little dingy concertinaing across the sea…”

The Lebanese civil war had begun, and the jets were targeting the port. Reaching the beach, Hazel sped towards the underground changing room. “Then the first bomb went off, so I just ran into the street in a bikini which you wouldn’t normally do in a Muslim country…”

It’s impossible for “talkaholic” Hazel, 66, to give a bad interview. The once panda-eyed, pink-haired star behind Top Ten hits like Eighth Day and Will You? has enough stories to fill a week of chat shows.

This is a woman who cut David Bowie’s hair, was romantically linked to George Michael, and was driven around Ireland by a then-obscure agent/”nutter” called Louis Walsh. But the highs of Hazel’s life are off-set by surprising lows, including a traumatic rape and a heart-breaking late miscarriage.

She found fame as rebellious singer Kate in the 1980 film Breaking Glass, but never saw a penny from her chart successes.

She broke her back four years ago trying to fix the septic tank at her holiday home in France. “I was trying to carry the big stone filter, I fell over, and that was it.” Hazel’s tone is matter-of-fact; her attitude stoic.

Born in Coventry to an Irish father and an English mother, she has one older brother Neil who was in punk band The Flys.

Her Galway-born father joined the British Army at 17 to fight in World War II, then moved to Coventry, met her mother and worked at a car-plant.

“Dad was part of a big working class male voice choir and he and mum both loved ballroom dancing so he’d either do a gig or they’d dance and all come back to ours. We’d hear people singing, laughing and dancing….”

One terrible night, her uncle drove into a lamppost with her parents in the car. “Dad went through the windscreen and nearly died. His throat was cut but he was so drunk they couldn’t give him anaesthetic to sew it up…I used to walk past that lamppost, it was quite an impact. The perils of drink-driving.”

Her parents survived, their marriage didn’t. “I don’t know if that pushed her to leave,” she says. “Neil was ten and I was eight when they split.”

The children lived with their maternal gran, sharing a bed separated by a bolster. Hazel only started singing to torment Neil. “He had asthma and couldn’t stop wheezing. I said, ‘if you don’t shut up, I’ll sing’ and I did. He said, ‘Haze, I can’t help it!’.”

Her first musical loves were the Small Faces and The Kinks, then she heard I Got Life by Nina Simone played at the local Locarno. “I thought ‘I want that one’, like the fella in Little Britain. My voice was too Minnie Mouse then. But now I’ve got it. I’ve lived into my voice.”

At 16, she quit art college and bolted “because I was selfish and I wanted an adventure”. She went to Morocco where she learned French and Arabic, and was raped at knife point.

“Back in England, I fell in love, but the guy didn’t seem to love me. So, I got a job as a go-go dancer in Japan. I expected him to beg me not to go but he didn’t ‑ he drove me to the airport.

“I was the worst dancer there, but I had a big pair of legs and that helped.”

Her boyfriend wrote suggesting they travel to Africa. “We were coming back crossing the Sahara, I got malaria and he left me to go back to Ghana. I realised it was over.”

Joining three-girl group Lady Luck, she toured GI bases across Europe in a Dormobile ‑ “us, three musicians and the manager all together; I ended up driving us back home after our costumes had been nicked.”

Hazel persuaded Neil to teach her how to write songs. “I had no musical training but I could see patterns on piano keys and quickly picked up how to make them work.

“The Flys supported the Buzzcocks and I wanted to be part of that energy. 70s music was stale, women were side-lined. Punk changed that.”

Breaking Glass was her big break, but she nearly walked out of the audition. “I saw Toyah there, I thought, I’ve got no chance.”

A self-help book convinced her that “if you really want something you can do it, but you have to believe…and I landed the lead role. They wanted someone unknown with a story to tell. They asked if I’d written any songs. I said loads. I’d written three!”

Hazel, who wrote scenes for the film, got paid Equity minimum wages for acting, but her now defunct label diddled the naïve star out of the royalties for her hits. “I didn’t care about money, I just wanted to get my records out.”

Around this time, Tony Visconti, who produced Hazel’s album, introduced her to Bowie. “I was in such awe! He was the first icon I’d ever met and he was so nice and so normal.

“He asked if the film title was inspired by his song of the same name. It wasn’t. He volunteered to write songs for it, but I had already written it all. Then he asked me to cut his hair. I was panicking, I didn’t have proper scissors; I used office scissors.”

Bowie wanted to see her live. “We were supporting Iggy Pop in Camden for two nights. The first night was really crappy. The audience were very hostile, shouting ‘Get off you silly bitch!’ I dropped Will You? cos I thought they’d want faster songs.

“The next night Bowie hadn’t turned up and the crowd were just as hostile, so I thought, right I’ll do Will You? just so I can say to myself, ‘Well I did it once before quitting forever…’

“Singing that song to a hostile crowd showed me that people could change in a flash as long as you’re true to yourself. They loved it. During the sax solo, I moved back and glanced in the wings, and there he was, David Bowie…That night changed my life. I gave myself permission to be who I was.”

Hazel dated actor John Finch, Midge Ure and Stranglers star Hugh Cornwell “for about a week before he went to prison” (for drug possession).

Famous pals included Clash guitarist Mick Jones, who hit on her in the Marquee but wasn’t her type, Elton John, who she taught to balance a spoon on his nose in Tunisia, and George Michael ‑ “such a lovely friend, we’d walk dogs together.”

The tabloids claimed they’d had a fling. She laughs. “We had a peck in a video but there was never a romance.”

Hazel recalls going to one of George’s parties in LA with then-husband, artist Kurt Bippert.

“We were skint and there was so much lovely fruit there. I told Kurt to tie knots in his jacket sleeves and fill them with pineapples.”

The couple moved to Rathdrum, Ireland, but over-worked Hazel miscarried at nearly five months and the marriage disintegrated.

She still lives there and has renovated the house herself ‑ not always a relaxing process. “I was trying to fix the roof, and a storm hit. The roof was so treacherous, I had to stay there until it blew over. I didn’t dare move!”

Lockdown taught her new ways to reach an audience. “I used to gig all the time ‑ I had to because I never got any royalties. I was just about to tour when everything locked down and wasn’t sure what to do. So I started to do a thing on Facebook every month, and it worked.”

Hazel plays Coventry next month and all her postponed tours from last year begin in March.

These days she relaxes by dog-walking, gardening, hill-walking and “stupid posts and songs on Facebook, I’m quite gauche. I like the fact that humanity can make mistakes. If you own up to them, people forgive you.”