In the summer of 2020, Sesali Bowen was working on her memoir Bad Fat Black Girl: Notes from a Trap Feminist. As she reflected on her experiences growing up in what she calls “the bad b-tch era,” she realized that while queer and female rappers were having a moment in Hip-Hop, there were no podcasts to capture it. So Bowen went about the business of creating one. She reached out to Pierre Phipps, one half of the rap duo Freaky Boiz, to help her co-host and the show, Purse First, launched that following January.

The phrase comes from a Black colloquialism which Bowen believes originated from street-based, sex work culture. The full phrase, “Purse first, ass last” speaks to the notion that the money should come before any of the fun stuff.

“I decided to go with that as the name of the show because I think that’s the overall vibe of female rap right now. It’s money first.” Bowen says. 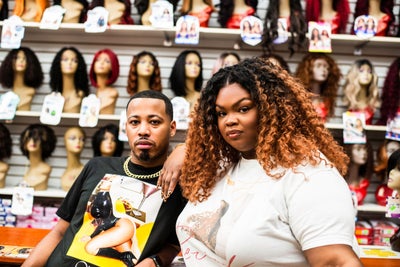 It’s also a commentary on the ways in which the work of queer and female artists has been diminished in more traditional Hip-Hop spaces.

“When female and queer artists go on some of these other podcasts or radio shows, a lot of times the only thing that the hosts want to talk to them about is sex and sexuality,” Bowen says. “We are very intentional about not doing that. Even though me and Pierre talk so much sh-t, are funny and we have a good time–what’s very clear is that we take the artistry, the careers and the business of these women seriously. Purse First is to disrupt the boy’s club of Hip-Hop commentary in general.”

As queer artists like Lil Nas X and Saucy Santana are shifting the parameters of Hip-Hop, there are still certain sects of the Black community who have been reluctant to embrace the movement. Most recently Lil Nas X made headlines after he spoke about not being nominated for a BET Award this past summer, though his album Montero received a Grammy nomination for album of the year. Bowen says homophobia is a residual effect of anti-Blackness.

“The same thing that makes a BET the last ones to jump on the bandwagon with a Lil Nas X or a [Saucy] Santana is the same rhetoric that would tell Black men to pull their pants up. Or Black girls to stop being ratchet,” Bowen says. “That reliance on respectability politics is extremely problematic.” 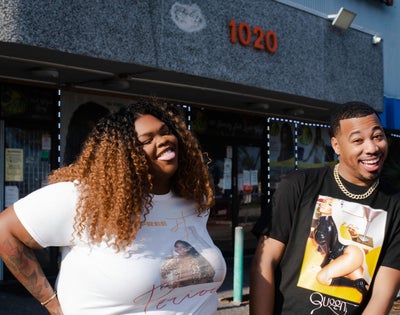 Still in the midst of all of the opposition, Bowen is inspired and encouraged by what queer artists have been able to accomplish.

“What is amazing though is that queer people have really innovated and been able to take advantage of the platforms that are available to them to not only just exist and live but to also make art and good art, to contribute more meaningful conversations and make impact on culture,” Bowen says.

In the past two seasons of Purse First, Bowen and Phipps have not only been able to carve out a lane for themselves, they’ve honed an authentic voice.

“I think that combined with my specific experience with entertainment journalism, Pierre and I together have a unique perspective,” Bowen explains. “One of the things that I’m really proud of is that we’re not afraid to be honest.”

For Bowen and Phipps being honest means offering constructive criticism and not feeling pressure to like every artist they discuss. It also means not “canceling” an artist every time they do something Sesali or Pierre deem unsavory. This dynamic comes up often in their discussions about Nicki Minaj.

“Pierre is a super Barb. And I am a very disgruntled Nicki fan,” Bowen says. “I am very critical of some of the decisions Nicki has made, how she responds to certain situations. But ultimately, I will still say it with my chest that Nicki is one of the hardest rappers to exist, period. And is 100 percent the Queen of Rap.”

Ultimately, Bowen says she and Pierre desire to be critical while still supporting and wanting to see these artists win because “that’s the grace that is given to these n-ggas.”

In the upcoming third season of the show, Bowen is looking to expand on the show’s foundation.

“I’m really excited to look forward and backward in terms of female rap,” Bowen says. “I’m excited to kind of tell some of the stories of female rappers or iconic female verses that meant a lot to us.”

She has one specific woman in mind. Lola Damone who wrote the verse “50 B-itches Deep.” It was one of the first songs Bowen remembers printing the lyrics to.

“I needed to learn them immediately,” Bowen recalls. “That verse has stayed with me forever. I think it’s one of the greatest examples of female-male collaboration. So I really want to do more oral histories. We’re not always just chasing the news of what the girls are doing now. We’re also talking about a broader, fuller culture so it really can feel like this is for female Hip-Hop heads.”

Bowen also lists Saucy Santana as one of her dream guests. He’s come up as a favorite of past guests and Bowen wants him in the room. She hopes that as Purse First grows, women and queer artists will come to know it as a safe space.

“[Artists] can go talk about their music with people who are going to keep it real with them, respect them, know what they’re talking about and are passionate. We want to let it be known that we exist and are here.”