Prince Charles and I have something in common from our childhood. Not a great deal admittedly. He had access to rather more royal palaces than me and we weren’t too big on servants or polo ponies in my terrace street.

But he’s admitted he enjoyed watching his old shoes being repaired. So did I —though in my case it was my father doing it rather than a professional cobbler.

I remember him squeezing our worn-out shoes onto the cobbler’s last that he’d inherited from his father and ripping off the old soles, which had more holes in them than a Swiss cheese.

Then the delicate task of cutting a sheet of leather to match, nailing it on and (the bit I was allowed to help with) holding a stick of hard wax over a candle so the molten wax ran on to the edges of the new sole. Job done. And what an immensely satisfying job it was. 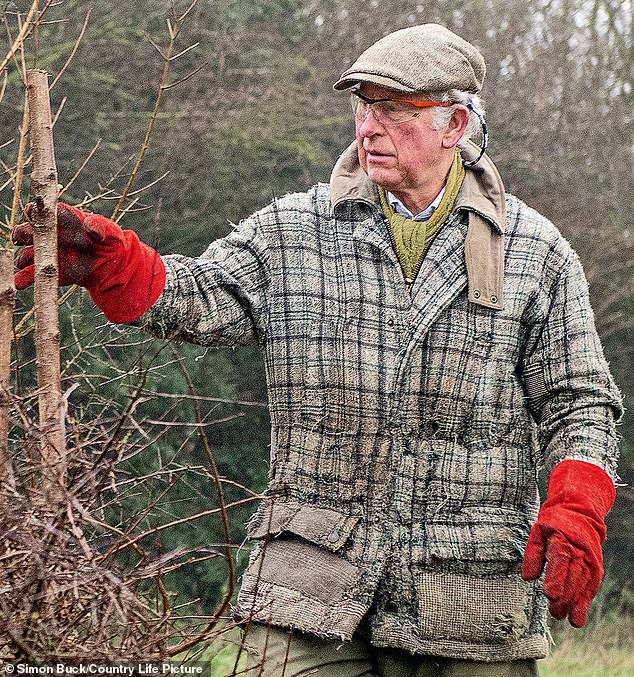 There was a wonderful picture of Prince Charles this week looking more like an ageing tramp than a future king in a tweed jacket so old and threadbare that, as Liz Jones pointed out in the pages of the Mail, even the patches had patches on them 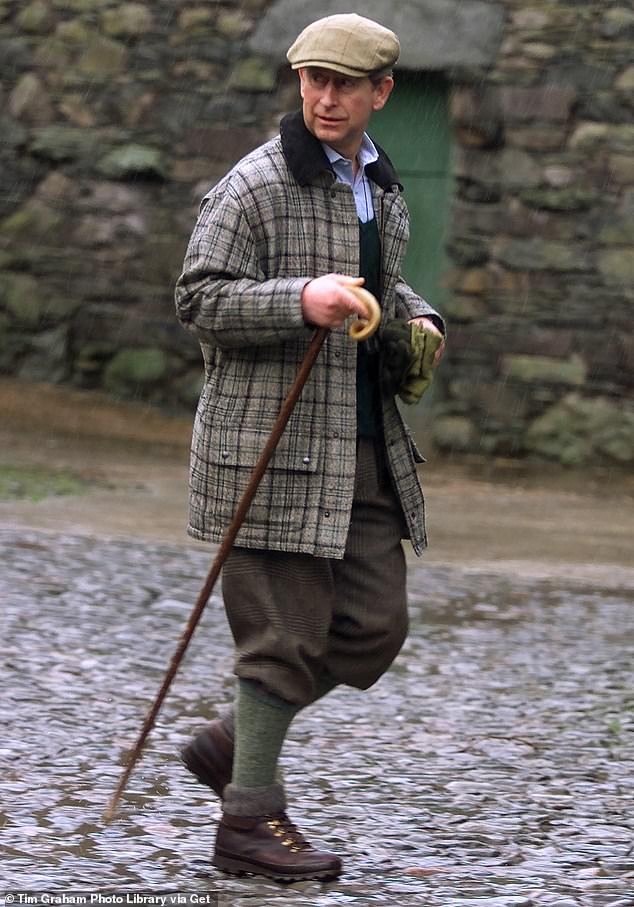 … to which there is only one response: respect! Charles may have lived a life of unimaginable luxury but it is to his great credit that he abhors waste. (Above, the tweed gamekeeper’s jacket worn on a Lake District walking holiday in 2002)

Not that Dad had any choice. New shoes cost money that we didn’t have. So it was with old clothes. I never saw my mother sit down in the evening without a pile of socks or jumpers to darn or patch. I rather doubt that Charles’s mother darned his socks, but I do know he had his old clothes patched.

There was a wonderful picture of him this week looking more like an ageing tramp than a future king in a tweed jacket so old and threadbare that, as Liz Jones pointed out in these pages, even the patches had patches on them. 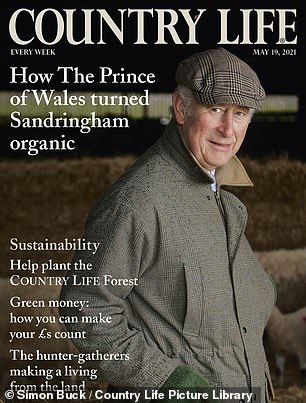 To which there is only one response: respect! Charles may have lived a life of unimaginable luxury but it is to his great credit that he abhors waste.

When the former Chief Rabbi Lord Sacks presented Thought for the Day on my last morning on Today, he compared me to an Old Testament prophet. Not good enough, I told him. I want to be Moses so that I can rewrite the Ten Commandments. The first would read: ‘Thou Shalt Not Waste’.

Waste is more than stupid. It is morally wrong. And it’s partly generational. I know a woman in her late 90s who keeps trying to persuade her care home to serve her smaller portions of food, but the young carers routinely say: ‘Oh, eat what you can and leave the rest.’

She finds that morally offensive because she knows perfectly well it will just get binned.

The United Nations estimates that about a third of all food produced around the globe is wasted. In this country alone, 65 per cent of us admit to buying too much food that ends up being thrown away. And yet around the world, nearly half the deaths of children under the age of five are due to malnutrition.

Even in the affluent EU countries it is calculated that there are 43 million people who can’t have a ‘quality meal’ two days on the run.

It’s not just food, of course: we waste pretty much everything. And not just the well-to-do either. Spend an hour at the council tip (or recycling centre, as it’s often misleadingly called) and you get the idea. 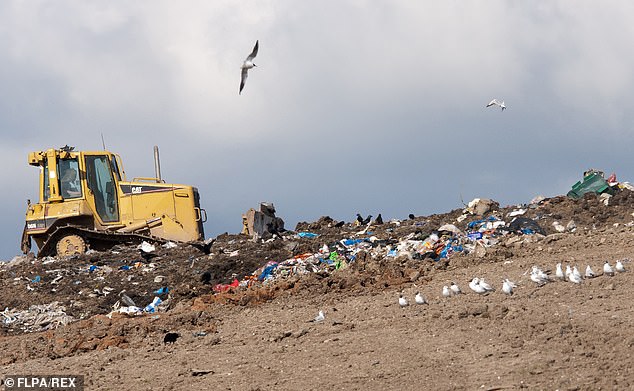 We waste pretty much everything. And not just the well-to-do either. Spend an hour at the council tip (or recycling centre, as it’s often misleadingly called) and you get the idea

Well, in the first place it squanders scarce resources — especially natural resources — at a terrifying rate. And when we buy something new instead of mending the old, it invariably comes packaged in an obscene amount of plastic.

You thought we were dealing with the plastic scandal? Well there’s no doubt campaigns like those mounted by this newspaper are making a difference, but how deeply depressing to learn what happens to that plastic so many people are now conscientiously trying to get recycled.

We’ve just learnt that millions of tons of it get sent off to countries like Turkey — where, Greenpeace says, it is often burned, spewing vast amounts of carbon into the atmosphere. Or it’s just dumped and ends up in rivers and then the oceans, where it causes unspeakable harm to sea life.

The ultimate indictment of waste is what it’s doing to our precious planet. Specifically global warming.

The UN reckons that global food waste contributes up to 8 per cent of global carbon emissions. And that’s not the half of it. There’s the vast amount of energy we use making stuff we don’t really need, transporting it around the world and then throwing it away when it breaks or we get fed up with it.

It’s not all doom and gloom, though. It’s just possible that many young people are beginning to reject the idea that because clothes are so cheap, you can ‘afford’ to throw them out once you’ve worn them a couple of times.

True, there are still plenty of idiots out there who throw out their old, torn jeans and then pay good money to buy . . . umm . . . new torn jeans, thus proving the old adage that a fool and his money are soon parted. 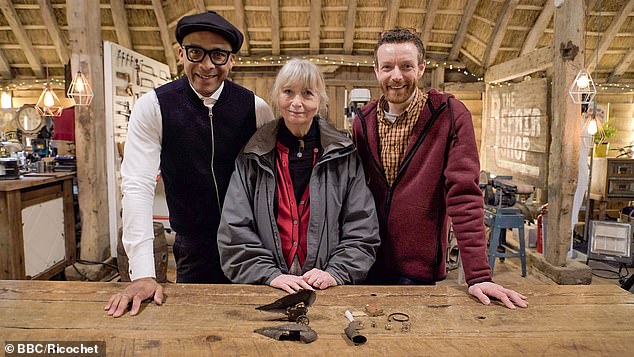 But set against the cynicism of the fashion industry is a growing green awareness among young people. To many of them, recycling is not just about bins. I know a clever and stylish young woman who wouldn’t dream of buying new clothes or throwing out her old ones. She uses social media to swap and share with like-minded friends. Good on them.

The popularity of TV programmes like The Repair Shop suggests more of us are getting the message that when something breaks you don’t automatically throw it out.

The Queen is said to go around Buckingham Palace switching off lights. Pity she can’t do the same at all those vast office buildings and shops in big towns and cities that keep them blazing all night.

I was ticked off by the bosses when I used to turn up at the BBC in the middle of the night for Today and switched off the computers and vast TV monitors that no one was watching because they were in bed. So I stopped switching them off and pulled out the plugs instead. Childish, perhaps, but quite satisfying.

Yet there’s only so much we humble consumers can do. The real villains are the big institutions — above all, the government. Margaret Thatcher summed it up perfectly a few years ago. Governments are wasteful because it’s not their money.

A couple of hours spent reading reports from the National Audit Office is enough to make you howl in despair. The latest shockers are questionable contracts awarded to companies during the Covid crisis: a staggering £17 billion of which are being questioned by the NAO. One was for £250 million worth of PPE. The lucky recipient?

A Miami jewellery designer. That’s chicken feed compared with the billions spent by military procurement on equipment that doesn’t work and isn’t needed. Or the disastrous NHS IT system that was finally abandoned — but not until at least £10 billion had been wasted on it.

As for the HS2 project, I expect to be pushing up the daisies by the time my kids are using it. If they ever do. A snip at £104 billion. And counting.

It may be too late to change all that now, but it’s not too late to change the way we lead our own lives. Economists may say we can’t do that because ‘demand’ is what drives our economy and 70 per cent of demand is accounted for by personal consumption.

Yet it’s half that in China, which is about to take over from the United States as the mightiest economy on the planet.

I wonder how many of them mend their own shoes.