Leading figures within Labor’s Right faction have called on the party to reconsider its criticism of the federal government’s handling of Australia’s relationship with China, use the United Nations to pressure Beijing on human rights and promise to seek greater trade alliances with India and Korea.

Opposition Leader Anthony Albanese has sharpened his criticism of the Morrison government in recent times as diplomatic relations between Canberra and Beijing have reached their lowest levels in decades. 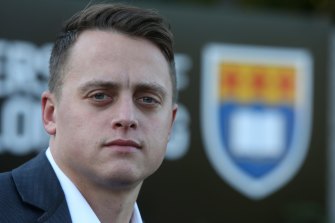 Australia Workers Union official Misha Zelinsky says Australians expect their politicians to be honest with them about challenges facing the country.Credit:Robert Peet

China has imposed more than $20 billion of tariffs in response to various Australian moves including calling for a global inquiry into the origins of COVID-19 and banning Chinese telecom giant Huawei from its 5G rollout.

But in a column for the upcoming edition of the Labor-aligned John Curtin Research Centre’s flagship publication The Tocsin, Misha Zelinsky, the assistant national secretary of the Australian Workers’ Union, warns while it makes political sense to blame the Liberals for “mishandling” a critical bilateral relationship, it may be counterproductive to winning government.

He said while the Coalition had sought trade opportunities with China under both prime ministers John Howard and Tony Abbott, it was Malcolm Turnbull and then Scott Morrison who made the harder calls with bipartisan support from Labor.

The government’s stance culminated in a list of 14 grievances released by the Chinese Community Party as it sought to blame Australia for the collapse in bilateral relations.

“Assessing China’s list of issues with Australia should give pause to those who think there’s a way to return to the cosy old Howard formula,” Mr Zelinsky writes. “Those who somehow believe the challenge in the relationship is ‘tonal’ must answer: What would you give up from that list?”

But Mr Zelinsky said Australians expected their politicians to be honest with them about these challenges.

“Public polling shows Aussies to be well ahead of the political class when it comes to assessing the risks posed by an assertive CCP – they want a rational, clear-eyed debate about how we handle this global challenge,” he writes. “As national security comes roaring back into the political arena as a ‘ready for governing’ test, Labor ignores their concerns at its peril.”

Victorian senator Kimberley Kitching, the co-chair of the Inter-Parliamentary Alliance on China writes in her essay in The Tocsin, “The Standard You Walk Past”, that Australia can do more to call out the treatment of the Uighur Muslim community in China’s Xinjiang province and should join with other nations to pressure Beijing through the UN.

“While some may argue that there are limits to what Australia can do beyond ensuring the local Uighur community does not face threat or intimidation, I do not accept this is the case,” she writes.

“We could, and should, with other concerned nations consider calling for the United Nations to create a special rapporteur on Xinjiang tasked with providing periodical assessments on the human rights situation in the region.”

Senator Kitching, the chair of the foreign affairs, defence and trade references committee, also says the Australian government should consider allowing a conscience vote in Parliament on the question of whether the activities against Uighur and other minority communities are in contravention of the principles outlined by the UN.

But Labor’s trade spokeswoman, Madeleine King, says while the benefits of the trading relationship with China should be celebrated, the government should have been doing much more to avoid an over-reliance on any single market.

“I understand the relationship with China is increasingly complex and that it must always be managed in the national interest,” she writes.

“While the wealth generated by exports is hugely important, national security and sovereignty are paramount. But if the federal government wants to help our exporters, it could start by drawing on the expertise of Australian companies that have enjoyed long-term trade links with China.”

She said it was time for Australia to get serious about building better relationships with India and Indonesia, both of which are predicted to be among the world’s top four economies within 30 years.

“Vietnam is another regional market with massive potential. And we must continue to expand our already strong trading relationship with South Korea and Japan,” she writes.