Older people who live alone and have little interaction with the outside world are more likely to end up in hospital with respiratory disease, a study has found.

Research in the BMJ looked at what increases the likelihood of older people being admitted for treatment with conditions such as COPD and COVID-19.

Data from almost 4,500 over-50s in the UK found one in nine people end up in hospital with respiratory problems over time.

Living alone and poor social engagement was found to increase the chance of a trip to hospital by 32 and 24 per cent, respectively.

A clear explanation as to why these factors increase the likelihood of hospital trips is unknown, but the researchers suggest people who are isolated may be inactive and in generally poor health.

They are also less likely to be encouraged by others to seek medical advice and also more likely to be smokers, the British researchers write.

Doctors may also be more tempted to admit them to hospital because of the increased risk of falls. 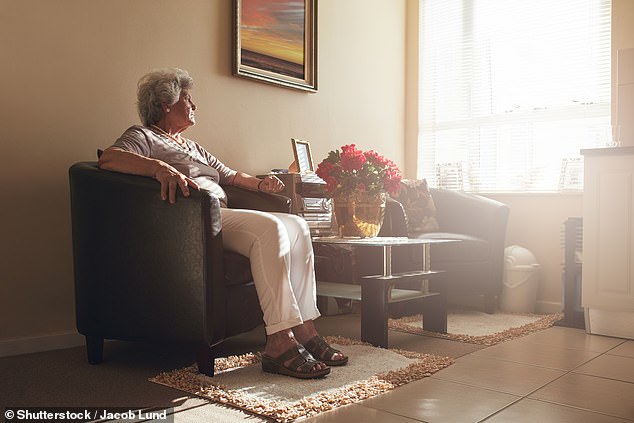 Living alone and poor social engagement was found to increase the chance of a trip to hospital by 32 and 24 per cent, respectively (stock photo)

Interestingly, loneliness and levels of social contact with friends and family were not associated with a heightened risk of admission.

The findings come at a time when millions of Britons are confined to their homes because of the pandemic.

It also has implications for the severity of the coronavirus – itself a life-threatening breathing disorder.

Lead author Professor Daisy Fancourt, of University College London, said: ‘Whilst this study focused on respiratory disease, it does raise questions as to if, and how, hospital admissions for other respiratory conditions such as COVID-19 may be related to social factors such as isolation in addition to biomedical factors.’

Respiratory disease affects one in five people in England – and is the third biggest cause of death.

The results published in Thorax are based on the hospital records and death certificates of 4,478 people.

They were taking part in the English Longitudinal Study on Ageing (ELSA) and were followed for almost a decade, on average.

Professor Fancourt, an epidemiologist at the Research Department of Behavioural Science and Health, said: ‘To date, little attention has been paid to social factors such as social isolation and loneliness, despite a strong rationale for their influence.

‘Both social isolation and loneliness have been linked with an increased incidence of morbidity and mortality and are associated with decreased medication adherence and health-seeking behaviours, and increased hospital admissions for a wide range of conditions including mental illness and heart failure.’

She said the findings back preliminary studies that have suggested social isolation may increase risk of winter hospital admission for people with COPD.

Social activities such as group singing and dance are increasingly utilised in COPD management – with suggestions they may reduce health service utilisation and hospital admissions, she said.

IS IT POSSIBLE TO DIE OF LONELINESS?

Research suggests it is possible to ‘die of loneliness’.

A major study published March 2018 suggested social isolation can increase the chance of a stroke by 39 per cent and premature death by 50 per cent.

Loneliness may raise the risk of a heart attack by more than 40 per cent, researchers found.

The analysis was based on the health records of 480,000 Britons – making it the largest study of its kind.

Those who already had cardiovascular problems were far more likely to die early if they were isolated, suggesting the importance of family and friends in aiding recovery.

The research team, which included British academics, said lonely people had a higher rates of chronic diseases and smoking and showed more symptoms of depression.