The Australian economy faces a projected hit of up to $60 billion within the next three years while international students are blocked from coming here due to the COVID-19 pandemic.

The blow from each six-month intake of foreign students lost could equate to the hit the economy took when Australia lost its entire car manufacturing industry.

The country’s eight most prestigious universities face the largest loss of revenue, because of their greater intake of international students, but smaller and regional universities are also likely to suffer severe financial consequences that could force them to shed staff and cut back on courses. 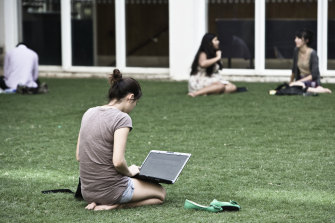 Universities face an estimated hit of $10b to $19b in lost revenue from international students. Credit:Louie Douvis

Modelling by Victoria University’s Mitchell Institute projects that Australia’s university sector will lose between $10 billion and $19 billion between 2020 and 2023, depending on how quickly the nation’s borders are reopened to students.

A further $20 billion to $38 billion in wider benefits to the national economy would also be lost.

The overall projection could result in a hole in the economy of between $30 billion and $60 billion.

“International university students are a pipeline, so if you miss a six-month intake it is revenue that is not going to be in the system for two to three years,” Mr Hurley said.

“It really is a worst-case scenario for universities.”

The revenue universities have drawn from international students increased by 137 per cent between 2008 and 2018, the institute’s report, Australian Investment in Education: Higher Education, states.

“There are more of them and [universities] are charging them more,” Mr Hurley said of the sector's increasing reliance on international students.

Meanwhile, revenue from domestic students increased 43.2 per cent as student numbers grew 37.5 per cent, but without a comparable hike in tuition fees.

Victoria and NSW combined draw slightly more than two-thirds of total Australian revenue from international students, claiming $5.99 billion out of a sector-wide $8.76 billion in 2018.

Mr Hurley said the larger universities were in a healthy financial position before the COVID-19 pandemic hit and had resources to draw on during lean times.

Most smaller universities had less reliance on foreign students but also had less in reserve and would likely be forced to make tough decisions.

Universities have welcomed the government support but warned it does not address the "big hole" in revenue from the loss of international students.

International education providers have also been alarmed about long-term damage to Australia’s reputation after Prime Minister Scott Morrison recently said it was “time to go home” for foreign students and workers who couldn’t support themselves.

Education consultant Claire Field said the lack of support being shown to international students by the Australian government right now could also do lasting reputational damage to the university sector.

"Our approach is in sharp contrast to the UK, NZ and Canadian governments, all of whom are extending to international students the same support they’re providing their citizens," Ms Field said.

"If Australia doesn’t provide financial assistance to international students who have lost their jobs because of the coronavirus crisis I expect the damage to the sector to be far greater this time," she said.