Plot your perfect home: New Government loans should make self-building not just for the wealthy – but is it right for you?

Have you ever dreamed of owning a house that is built exactly to your taste? If so, then the Government has good news for you.

In April, it announced a £150 million Help To Build initiative — due to be launched in September — designed for people who want to build their own homes.

The individual homebuilder will be expected to put up a 5 per cent deposit while the Government will loan 20 per cent of the build cost, with a 75 per cent mortgage making up the rest and a ceiling of £600,000. But is this a practical option for most of us? 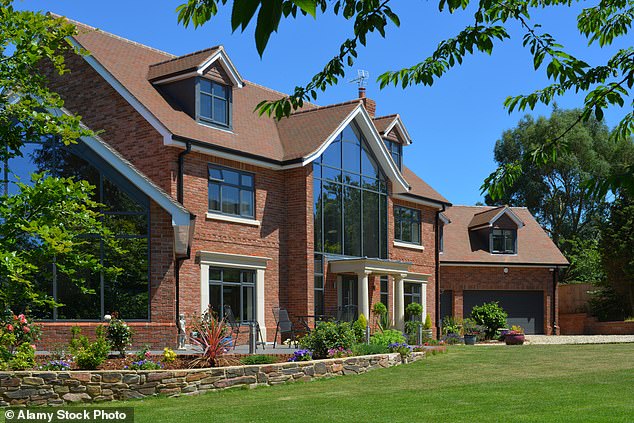 Bespoke: A magnificent new self-build family home in Exton, East Devon. About 13,000 people build their own homes in the UK each year

‘Building your own home isn’t a dream limited to the rich or the adventurous,’ says TV broadcaster Kevin McCloud on the National Custom & Self Build Association portal. ‘Anyone can do it and the rewards are fantastic.

They usually make homes which are much greener and built to higher quality standards than the norm. Savings are typically a quarter to a half of the costs.’

Claire and Peter Dickinson, both in their 60s, from Wigan are delighted with the four-bedroom house they built in Nesscliffe, Shropshire, last year.

The design exactly suits their lifestyle. It has a large garage to store Peter’s two sea kayaks and the ground-floor layout, including a wet room, is arranged so that they can live downstairs when they are older.

Peter stayed within his budget due to Claire’s meticulous planning. ‘She would have spread sheets with every single light fitting, pot of paint and piece of fabric costed,’ he says. ‘And we would be on site talking to the builders at least once a week.’

There is help and advice available for the self-build novice. Magazines such as Build It and Self Build & Design run regional shows throughout the year and the National Self Build and Renovation Centre (NSBRC) near Swindon organises courses on every aspect of house building and stages a permanent exhibition.

Of course, not all self-build projects go without a hitch.

When Richard and Diane Boucher moved from Southend in Essex to a little village in Norfolk, everything at first went well.

‘We had engaged an eco-build specialist and he was brilliant,’ says Richard, 66, who is a retired IT executive. ‘But Covid meant he was “let go” and his replacement was uncooperative.’

Their new house is extremely ‘green’ with a combination of ground-source heat pumps, solar panels and a rain harvesting system. It is the couple’s dream home, with big, light-filled rooms.

The house is surrounded by open fields that are teeming with wildlife, including owls, kites and songbirds.

Yet, despite having been a success in many ways, the battles with the builder have left a sour taste. Richard may well take his grievances, which cannot be detailed here, to the law courts.

Having problems with builders is one of the most common stumbling points for the self-builder.

So how do you tell the reputable craftsman from the cowboy? ‘A good builder is a busy one, so be suspicious if he is available to work for you next week,’ says Harvey Fremlin of the NSBRC.

‘Get recommendations from people. If you pass a site and you like what is going on, have a chat with the builder. A serious builder will be proud of his work and will welcome the chance to show it off.’

Dealing with planners is another gripe. Fremlin says that submitting a pre-application so the planners can pick what they don’t like in your plans at an early stage will save disappointment later.

About 13,000 people build their own homes in the UK each year. It is hoped that number will increase to as many as 40,000 new homes a year with the introduction of Help To Build.