The gunman was killed in a police standoff in the middle of a freeway.

Two people are dead and many more are lucky not to be after a random shooting spree in Los Angeles on Tuesday morning.

24-year-old Newlywed Alexis Carbajal and 42-year-old Uber driver Mingzhi Zhu were both killed when Carlos Lopez Melendrez, 50, drove through the city firing at people in cars, until he was himself killed in a standoff with police in the middle of a freeway.

Police have no idea of the motive that set him off.

“These appear to be random acts of violence… we have no idea what precipitated this,” LAPD’s Lt. Raul Jovel told a news conference, per NBCLA.

The ordeal began around 1 AM: a 43-year-old man was sitting in his vehicle in Downton LA, when a bullet was fired into his vehicle, grazing his head; other Angelinos would not be so lucky.

The driver called 911 and was able to give a description of the shooters Jeep; his dashcam also captured an image.

Unfortunately police were not able to locate it in time before the shooter killed his first victim: Carbajal was waiting at the Starbucks drive thru at Figueroa and 28th with his new wife in their blue Mustang when they were suddenly rammed by the Jeep. He was shot in the head and killed, while his wife sat beside him, escaping uninjured.

About 15 minutes later, the killer struck again. Zhu was waiting at a red light on Seventh and Figueroa in his Cadillac Escalade, when he too was fatally struck by a bullet.

Police finally caught sight of Melendrez’s car, and began a pursuit, along the Pomona and Orange freeways; another motorist, Seth Jones, had a bullet shatter his window as Melendrez shot into his car as he was being chased. Thankfully, Jones himself was not hit.

At 4 AM police finally managed to hobble the car with spike strips on the 91 Freeway above Raymond Ave and box it in, and a standoff began.

After running his plates, police traced a relative, who attempted to talk him down.

“SWAT officers arrived, and they initiated the normal procedures to negotiate with the suspect,” Jovel said. “They attempted to talk to him several times. At one point, they tried to have the suspect talk to a family member. That was unsuccessful.” 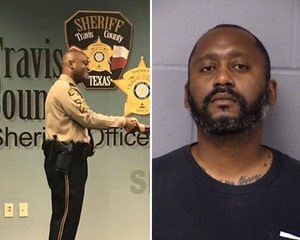