A call from senior NSW Nationals for Commonwealth-owned environment water to be redirected to farmers is set to sink almost as quickly as it was floated with Victoria and South Australia opposing the move, and experts declaring it illegal.

Irrigators in NSW’s Murray and Murrumbidgee regions who own the least reliable class of water entitlements, General Security, are facing their third year without a drink due to severe drought. 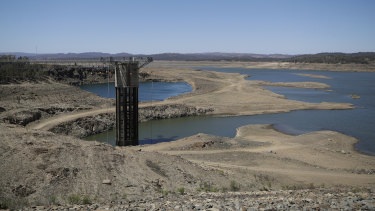 Irrigators in southern NSW have experienced three years in a row of zero or very low water allocations. Credit:Alex Ellinghausen

NSW Deputy Premier John Barilaro said this week Commonwealth water must be used for food production, arguing the Basin Plan was “flawed” and favoured the environment “at the expense of the community and irrigators”.

The Commonwealth has built up a portfolio of environment water entitlements since 2013 under the Murray Darling basin plan, which is an environmental reform to buy water from irrigators to benefit fish, birds and wetlands.

“The water held by the Commonwealth could be used to underwrite an opening allocation for NSW Murray and Murrumbidgee General Security Entitlement holders,” Ms Pavey said.

Melbourne University Centre for Resources, Energy and Environment Law senior fellow Erin O’Donnell said the Commonwealth Water Act did not allow water held by the Commonwealth to be changed.

“Any use of Commonwealth environment water for non-environmental purposes is not prescribed under the current legislation,” Dr O’Donnell said.

There is a clause in the Water Act that allows some water entitlements to be used to satisfy critical human needs, Dr O'Donnel said, "but even that would be incredibly challenging because the Act doesn’t allow for a re-allocation of water already set aside for environmental purposes.”

Responding to a request from Mr Barilaro and Ms Pavey, Federal Water Minister Keith Pitt has agreed to bring forward a Murray Darling Basin meeting from July to May. But South Australia or Victoria would have to agree to give NSW some of their environmental water, because the Commonwealth’s reserves in NSW are exhausted.

Victorian Water Minister Lisa Neville blasted the move, warning it would have "disastrous impacts" on Victorian irrigators and communities.

"We have been very clear that we will not support any further water being taken from Victorian farmers," Ms Neville said.

SA Water Minister David Speirs said there was “no need for a crisis meeting" of water ministers and he wouldn’t support “reckless and short-sighted measures that hand more water to up-stream irrigators at the expense of those downstream and jeopardise the long-term health of the Murray-Darling Basin”.

NSW Senator and former advisor to the private Murray Irrigation Corporation Perin Davey said state governments control water allocation in their jurisdictions and “NSW is currently holding back more water for high priority needs next year than they have reserved in the previous two years” and releasing just half of those holdings would deliver a five per cent allocation to NSW’s Murray irrigators.

NSW Irrigators Council chief executive Steve Whan said re-purposing environment water for irrigation would undermine the principle of property rights that protect the value of irrigators' entitlements. "We want water ownership to be respected – irrigation or environmental – you can’t just take it off the owner,” Mr Whan said.