In March and early April, the Donna complex was acutely overcrowded, at one point surpassing 1,600% of its pandemic-era capacity. On April 2, for example, there were about 4,300 migrants held there, including 3,700 unaccompanied minors, the Border Patrol chief in Texas’ Rio Grande Valley told reporters Thursday.

On Thursday, when a small group of journalists were allowed to tour the Donna tents, the facility was holding about 800 migrants, including 330 unaccompanied children — an 80% drop, according to Brian Hastings, the Border Patrol chief.

Despite the improved holding conditions at Donna, CBS News witnessed on Thursday the persistent humanitarian challenges the Biden administration is facing due to the recent sharp increase in arrivals of unaccompanied children and families at the U.S.-Mexico border.

Teenage boys who had recently entered U.S. custody were still wearing soiled jeans, remnants of crossing the Rio Grande. Three Honduran siblings sat idly on a bench while waiting to be sent to a shelter. A young unaccompanied child housed in a pod with other minors cried while sitting alone on a mat.

Pods inside Donna designed to hold a handful of migrants were holding dozens of unaccompanied minors in March, leaving very little space between the mats children use to sleep. On Thursday, each pod was holding no more than eight children. 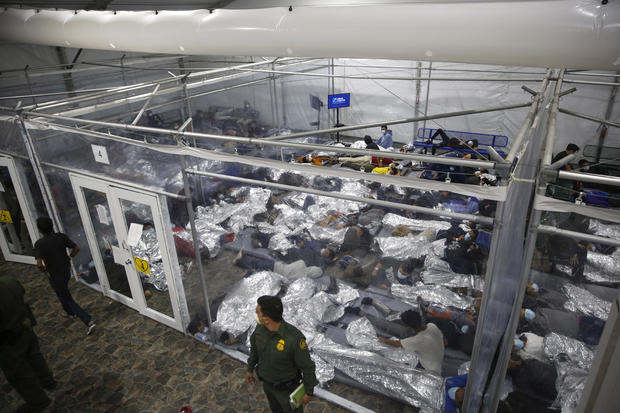 When news cameras were allowed inside the Donna tents in March, there were 27 young unaccompanied children in the facility’s playpen. There were no children there on Thursday afternoon. There were only two mats and mylar blankets that had been used by two young children, including a 4-year-old, who were transferred to shelters in the morning.

The dramatic drop in the number of migrants held in Donna is part of a broader trend. The number of unaccompanied children in Border Patrol custody has plummeted over 80% after surpassing 5,700 in late March, with the agency holding fewer than 800 lone minors as of Wednesday, according to government data.

Oscar Escamilla, a Border Patrol official in south Texas, said the agency has been able to process unaccompanied children more quickly because the Department of Health and Human Services has opened more than a dozen emergency housing facilities, including convention centers, work camps, military sites and another tent in Donna.

Under U.S. law, Border Patrol is supposed to transfer unaccompanied minors to HHS within 72 hours of apprehending them. HHS is currently housing nearly 22,000 unaccompanied children in shelters and emergency facilities while it looks to place them with sponsors, who are typically relatives in the U.S.

Border Patrol, Escamilla noted, is still receiving hundreds of unaccompanied children per day, averaging 1,800 total apprehensions in the Rio Grande Valley in the past 21 days. He warned that the progress over the past several weeks could be derailed and overcrowding could return to Border Patrol facilities if HHS does not have sufficient bed space for unaccompanied youth.

While severe overcrowding at Donna was not apparent on Thursday, the facility is still over its current 500-person pandemic-era capacity. Earlier in the pandemic, the facility was not supposed to house more than 250 migrants.

There were dozens of mothers with children under the age of 7 waiting to be released at the Donna facility on Thursday. Border Patrol in south Texas has not been expelling these families to Mexico under a Trump-era public health edict because Mexican officials in the state of Tamaulipas have refused to accept children six and younger traveling with parents.

For several weeks, some families encountered in south Texas were being flown to El Paso and San Diego to be expelled to Mexico from there, but Escamilla said those flights were discontinued last week.

Many of the unaccompanied minors at the Donna complex on Thursday were teenagers, but some were younger. One pod, for example, is now housing unaccompanied children between the ages of 8 and 14.

Escamilla, the Border Patrol official, said his agency has encountered 5,700 unaccompanied children ages 12 and younger during the current fiscal year. About 26 caregivers care for these young children at the Donna facility through six-person shifts, he said.

Sometimes, Escamilla said, the children encountered by Border Patrol are particularly vulnerable, like those with medical conditions and pregnant teenage girls. He said a 16-year-old unaccompanied girl gave birth at Donna on Wednesday.