She’s got the moves! Sweet moment Princess Mary is spotted dancing with her husband of 18 years at a royal gala after an embarrassing blunder saw her disinvited from the Queen’s funeral

Crown Princess Mary of Denmark has flaunted her dancing skills and shared a touching moment with her husband Prince Frederik at a lavish bash.

The Australian-born royal, 50, attended a gala dinner at Christianborg Castle in Copenhagen on Friday evening where more than 350 guests partook in a choreographed dance.

Mary and Fredrik pranced about the dance floor moving from one partner to another then repeatedly coming back to embrace each other. 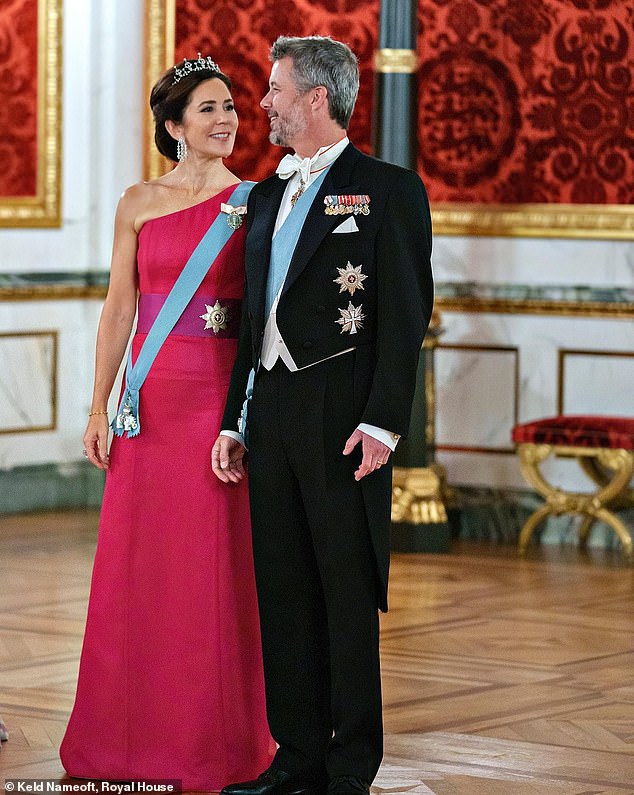 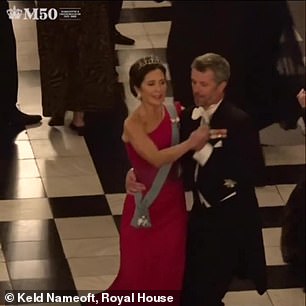 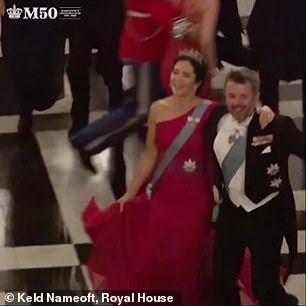 The Australian-born royal, 50, attended a gala dinner where more than 350 guests partook in a choreographed dance called Les Lanciers

Wearing a fuchsia one-shoulder gown by Danish designer David Anderson which she donned back in 2017, Mary looked radiant as she bowed, spun, skipped and held hands with the other guests.

The Crown Prince Couple, who celebrated their 18th anniversary back in May, would share a sweet smile each time they were reunited in the dance known as Les Lanciers.

Les Lanciers is a square dance performed by guests when there is a party at the Royal House, a tradition that dates back to the last 1950s. 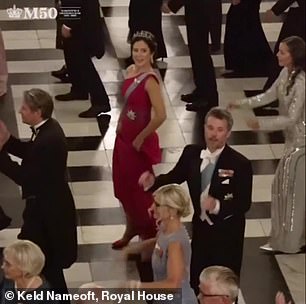 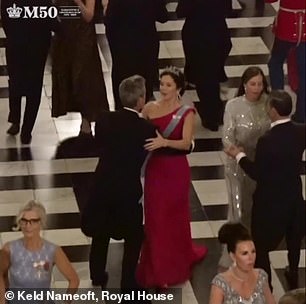 The Crown Prince Couple were seen bowing, spinning, skipping and holding hands with the other guests before sharing a sweet smile each time they were reunited in the dance 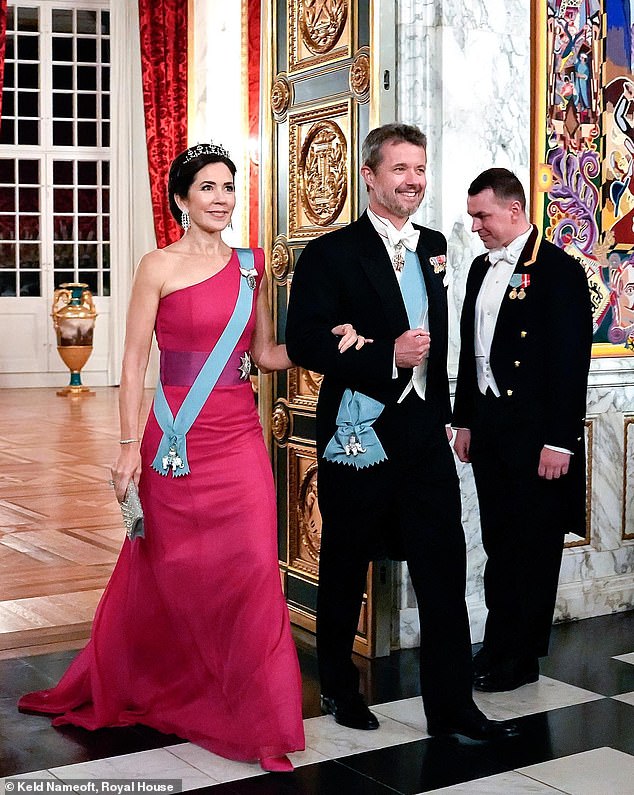 Friday night’s bash was held for the government, the Danish Parliament and the Danish members of the European parliament to mark Queen Margrethe II’s golden jubilee

Friday night’s bash was held for the government, the Danish Parliament and the Danish members of the European parliament to mark Queen Margrethe II’s golden jubilee.

The Queen was not in attendance as she had tested positive for Covid a few days before but Mary and Frederik looked more than happy to represent the family alongside Princess Benedikte, Margrethe’s sister.

The Danish Royal Family offered a glimpse into the glamour and fun of the gala on their Instagram page showing guests dancing with each other after dinner. 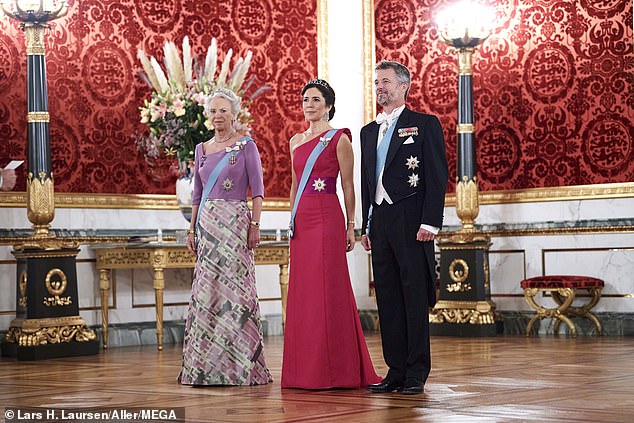 The Queen was not in attendance having tested positive for Covid but Mary and Frederik looked happy to represent the family alongside Princess Benedikte, Margrethe’s sister 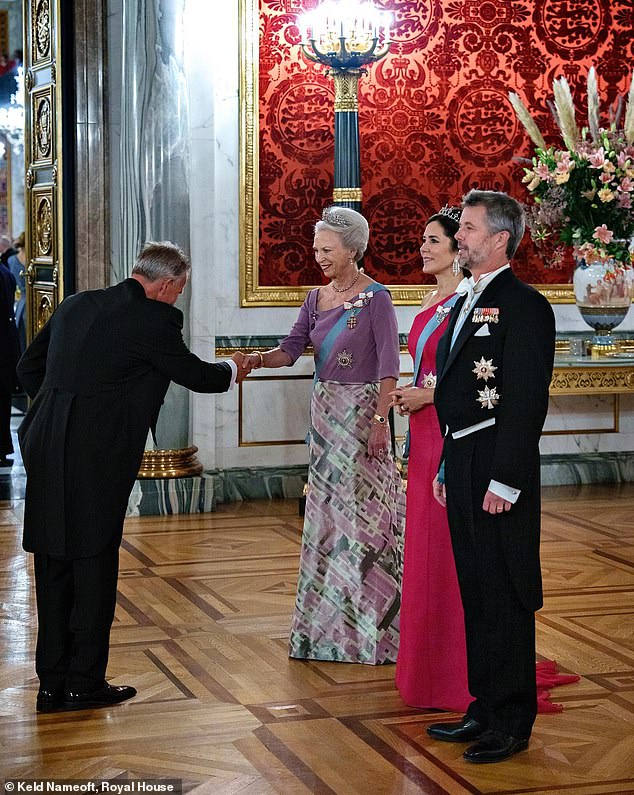 The footage is the first we’ve seen of Mary after she was reportedly uninvited from Queen Elizabeth II’s funeral last Monday.

Eagle-eyed royal commentators noted the distinct absence of the Australian-born Mary despite her husband and mother-in-law sitting in the front row of Westminster Abbey which was packed with royalty from around the world.

The Danish royal family was expected to attend in full force after they made an official announcement on September 13 but six days later Mary, the 50-year-old mother-of-four, was nowhere to be seen. 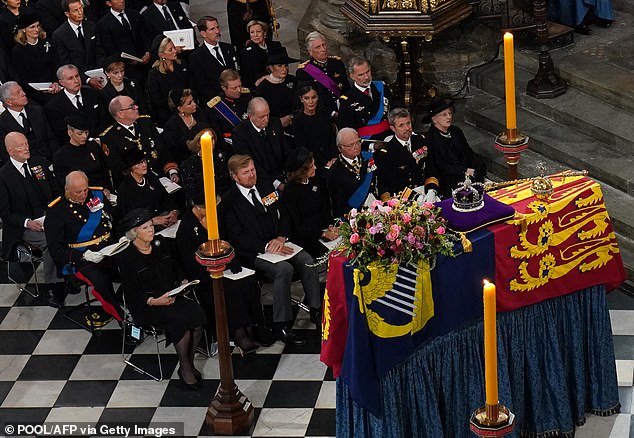 ‘HM The Queen and the Crown Prince Couple [will be] present at the State Funeral of Queen Elizabeth II on 19 September 2022 at Westminster Abbey in London, Great Britain,’ the statement last week said.

Princess Mary’s initial invitation to the funeral on Monday was made in error according to a statement from the Danish royals.

‘There has been a regrettable error in the invitation from the British Foreign Office’s protocol. It is thus only the Queen and the Crown Prince who, from the Danish side, will participate in Queen Elizabeth II’s state funeral on Monday,’ The Royal house confirmed to Danish tabloid BT. 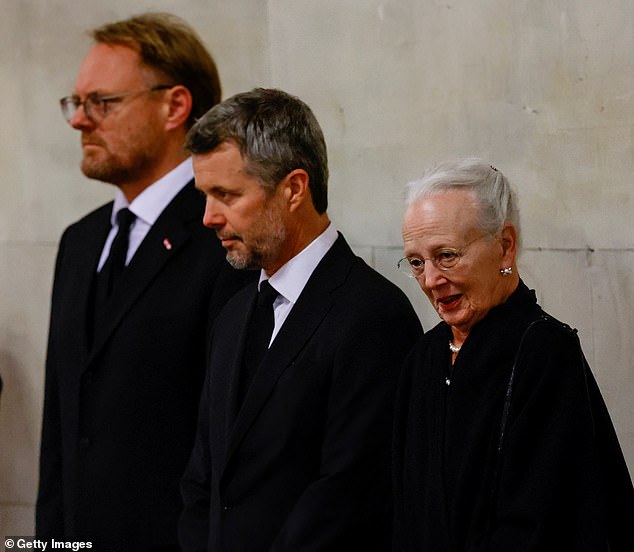 Every royal family and dignitary invited was permitted to bring one extra person with them, which is likely the reason why Mary was excluded.

BT’s royal correspondent Jacob Heinel Jensen said the Danish royal house would have been ‘upset’ by the eleventh hour change.

‘It’s really clumsy and unfortunate… It has meant that the Royal House must now say that a mistake had been made, and that is embarrassing,’ he said. 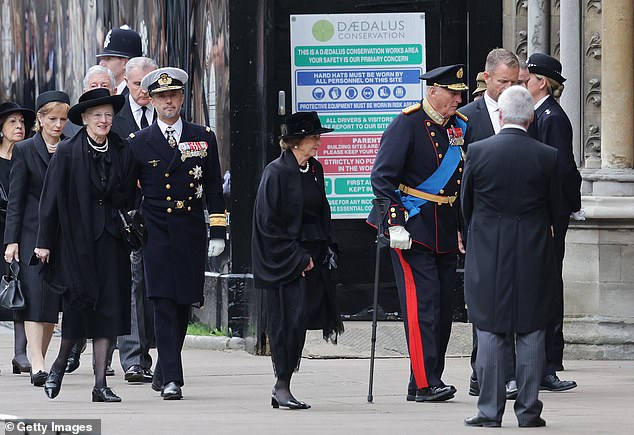 ‘I think the Royal House easily understands that a mistake has been made. I wondered myself when I was in London and the British media wrote that there were only two invitees per country.

‘After all, you got the feeling that there really must be extra close ties between Denmark and Britain’s royal house if we got three invitations.’