LIBERTY, Mo. — Nearly two years after 17 people died when a tourist boat sank on a Missouri lake, federal transportation safety investigators on Tuesday will release the results of an investigation into the tragedy.

The National Transportation Safety Board has been investigating what caused the Ride the Ducks vehicle to sink at Table Rock Lake near Branson, killing 17 of the 31 people on board. The boat, known as Stretch Duck 7, was unable to make it back to shore when a severe storm hit in July 2018.

The boat's owner, Ripley Entertainment, has settled 31 lawsuits filed by survivors or relatives of those who died. The dead included nine members of one family from Indianapolis. Other victims were from Missouri, Illinois and Arkansas.

The refurbished amphibious duck boats were a major tourist attraction in Branson for nearly 50 years, and Ripley purchased the attraction in 2017. The boats started out on land and then entered the water for a brief tour around the lake. Ripley suspended operations of the boats after the accident and it remains unclear if they will ever return to the lake.

In November, the NTSB criticized the U.S. Coast Guard for ignoring its recommendations to improve the boats since a duck boat accident in Arkansas killed 13 people in 1999. The board said it has repeatedly urged the Coast Guard to require that the boats be upgraded to better stay afloat when flooded, and to remove barriers to escape, such as canopies.

That report found that a fixed canopy and closed side curtain on the Branson boat prevented passengers from escaping and likely caused more deaths. 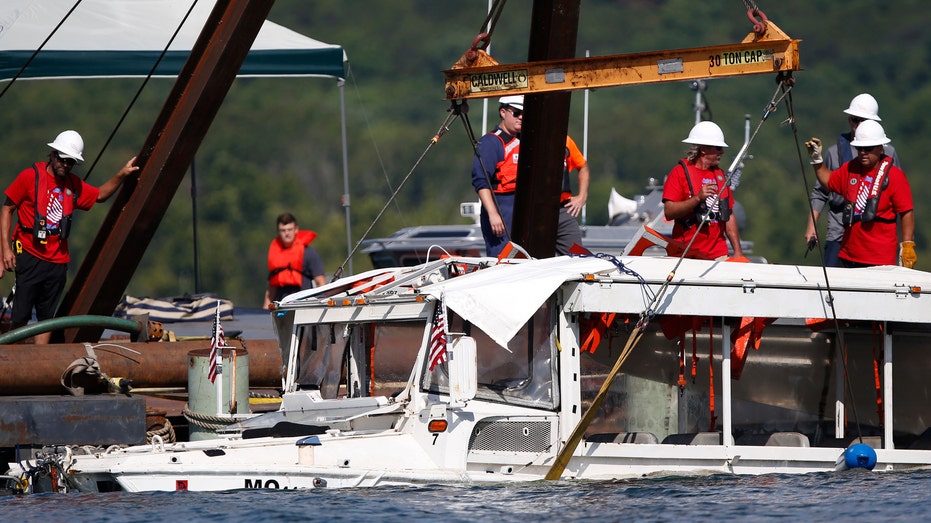 The duck boat that sank in Table Rock Lake in Branson, Mo., is raised after it went down the evening of July 19 on July 23, 2018. (Nathan Papes/The Springfield News-Leader via AP, File)

The boat’s captain and two company executives were indicted after the sinking. Curtis Lanham, the general manager at Ride the Ducks Branson, and Charles Baltzell, the operations supervisor, are charged with misconduct and neglect.

The boat's captain, Kenneth Scott McVee, of Verona, is charged with 17 counts of misconduct, negligence or inattention to duty. Investigators contend he did not tell the boat's passengers to don life jackets or help them abandon ship even after water started swamping the boat.