RICHARD LITTLEJOHN: Extinction Rebellion’s gone right off the rails by blockading HS2 construction sites up and down the country

Last week, in my CO-VE Day spoof, I joked about Extinction Rebellion reoccupying bridges across the Thames within minutes of the lockdown being lifted.

Yet again, I should have known better. How many times have I said that over the years?  The only thing I got wrong was the location. Yesterday, as work resumed on high-speed rail, a splinter group calling itself ‘HS2 Rebellion’ blockaded Euston Station and 20 other construction sites up and down the country.

All that was missing was a skateboarding copper bringing them a nice cup of tea.

Maybe the Met are waiting until the protesters set up a giant model of Thomas The Tank Engine in the Euston Road underpass, like that pink ship they parked in Oxford Circus for several days last summer.

When the Old Bill did eventually show up, some of the demonstrators started running on the spot, claiming that they were taking their essential daily exercise.

You couldn’t make it up. One joyous benefit of the past six weeks has been the absence of tedious show-offs shouting the odds on the streets. 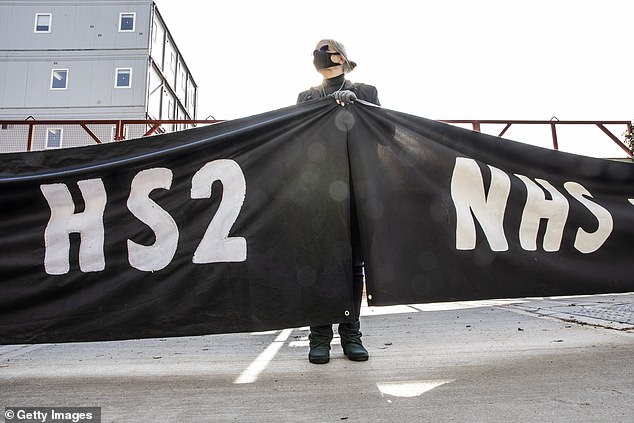 HS2 Rebellion staged a protest near Euston Station on Monday morning, holding up a banner that read ‘NHS not HS2’

The soap-dodging XR mob took over where the gobby anti-Brexit brigade outside Parliament left off.

Since the outbreak of Covid-19, the silence has been golden. But they were clearly itching to get their agitprop bovver boots on again. The limited resumption of HS2 has given them the lame excuse they need. For what it’s worth, I’m agin the ruinously expensive project.

And I’m not a recent convert to the cause, either.

‘By the time the HS2 railway through the Chilterns is built, everyone will be working online and there’ll be no need for faster inter-city trains.

If the Government is serious about getting the economy moving, it should forget about high-speed rail and invest in high-speed broadband.’

No, I didn’t write that yesterday, I wrote it in this column back in September 2012. Prescient, or what? Frankly, I can see no justification in spending tens of billions of pounds carving up areas of outstanding natural beauty, simply to shave a few minutes off the ride from Brum to London. 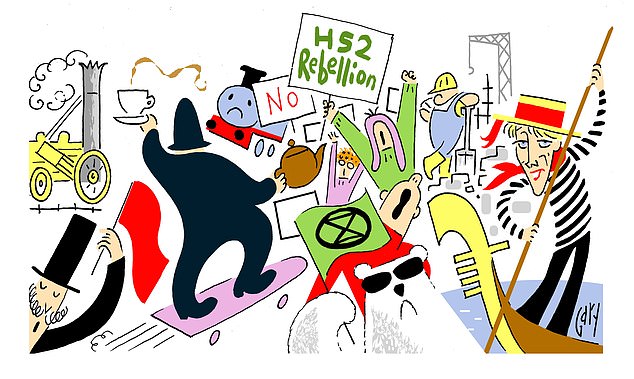 Especially when the money could be better spent elsewhere. At the weekend, for instance, it was revealed that the average speed of a railway journey in the North of England is a pathetic 16mph.

We’re not even talking Stephenson’s Rocket here (30mph, in 1829). How long before Network Rail hires men in stovepipe hats to walk in front of trains waving a red flag?

Still, while the HS2 project is going ahead, it’s horribly irresponsible to attempt to stop construction workers going about their lawful business.

They have families to look after, mouths to feed, bills to pay. The coronavirus crisis has created an existential economic catastrophe.

And attempting to exploit it in furtherance of selfish political goals is an act of deliberate and unforgivable sabotage. Where are Boris’s water-cannons when we need them?

Swampy’s successors try to justify their reckless, onanistic behaviour by claiming to act from the best of motives.

They’re only trying to save us from ourselves. Their press release said: ‘HS2 Ltd is risking the wellbeing of its workers, their families and communities by prioritising a few weeks of work over their safety.

‘There are no winners here, but there are losers — and our NHS is one of them. Not only does HS2 work risk spreading infection, the money being funnelled into this over-budget project could be spent on our under-funded healthcare system.’

Here we go. Invoking ‘our’ NHS is the last refuge of a scoundrel.

If protecting the health service is paramount, how does XR explain its latest stunt — urging supporters to stop paying taxes to save the polar bears?

The movement’s leaders are calling on activists to stage rent strikes, withhold taxes and take out bank loans and credit cards which they have no intention of repaying.  They want 10,000 people to sign up for this illegal, madcap scheme, to cripple HMRC and ‘force a society-wide conversation about our misguided economy’.

At this rate, pretty soon we won’t have an economy worth speaking of — misguided or otherwise.  Which is why disrupting any kind of economic activity, even those of which we might disapprove, right now is utter insanity.

Then again, I don’t suppose XR gives a monkey’s. Leave aside the fact that if the rest of us decided we weren’t going to pay our taxes, the sort of Left-wing lunatic who supports Extinction Rebellion would be screaming blue murder.

If everyone stopped paying tax, where would that leave ‘our’ NHS? Ocean-going hypocrisy is, of course, a hallmark of XR backers.

She never misses an opportunity to slag off evil ‘cake-filled, misery-laden’ Britain, but couldn’t wait to hot-foot it back here from her Venetian bolthole once Covid-19 got too close for comfort. 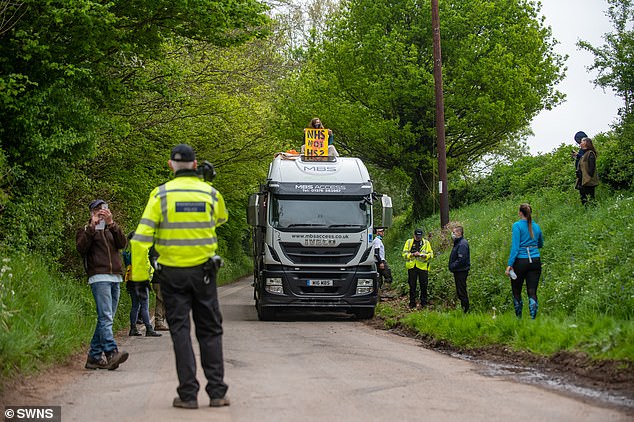 Demonstrators against HS2 held another protest on Monday at Crackley Woods near Kennilworth, Warwickshire

By private jet, probably. She did, after all, fly first class across the ­Atlantic to join the anti-carbon protests in London last year.

This isn’t so much Extinction Rebellion as Naked Exhibitionism.

Look at me, Mum! I’ve always argued that the year long miners’ strike in the Eighties wasn’t about saving coal mines — it was about Arthur Scargill having a strike and trying to bring down an elected government. The miners may have ‘lost’ but as far as Barmy Arthur was concerned, the strike itself was the victory.

Same goes for the XR headbangers. They may affect to care about the ice caps and the ozone layer, but in reality they are just another bunch of misanthropic anarchists hellbent on destroying Western capitalism.

Those in the media, politics and the police who indulge them as idealists should be ashamed of themselves. Yesterday, XR tried to stop decent people in difficult circumstances earning an honest day’s wages and urged supporters not to pay the taxes which fund ‘our’ NHS and other public services.

Enough, already. Stuff ‘peaceful protest’. It’s time to send in the heavy mob. The Save The Planet party’s over.

The Mind How You Go judges were working overtime at the weekend, concentrating on the Most Inappropriate Deployment Of Firearms category.

Kent Police racked up two nominations. First they scrambled a squadron of officers with machine guns to a disturbance at a pub near Maidstone. 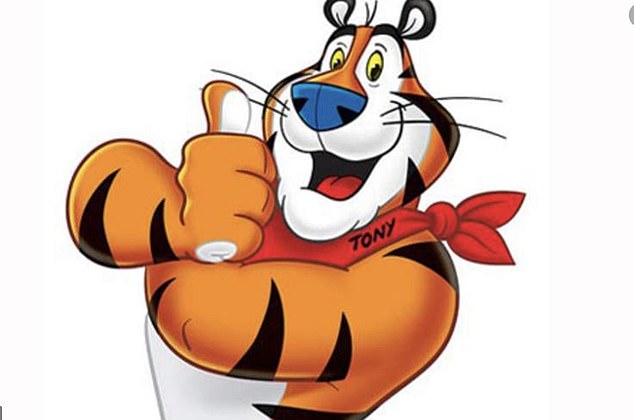 Armed police were called out over a fake tiger in Sevenoaks, Kent at the weekend, but it wasn’t Kellogg’s mascot Tony

This was a punch-up at a boozer called The White Horse, not the Gunfight at the OK Corral.

For an encore, they sent a helicopter and an armed response unit to a sighting of a wild animal in a wood outside Sevenoaks. Whirlybirds are GO!

Turns out the ‘wild animal’ was a model of a tiger made out of chicken wire and resin by an 85-year-old sculptress. It’s GRRRRRR-EAT! Everybody back on the helicopter

Never mind clapping the NHS, residents of Belper in Derbyshire have been taking part in a ‘mass moo’ — making collective cow noises in their gardens.

When hundreds of people spontaneously start mooing in perfect harmony, it’s probably time to assume that this lockdown has gone on too long.

Howling at the moon can’t be far behind. 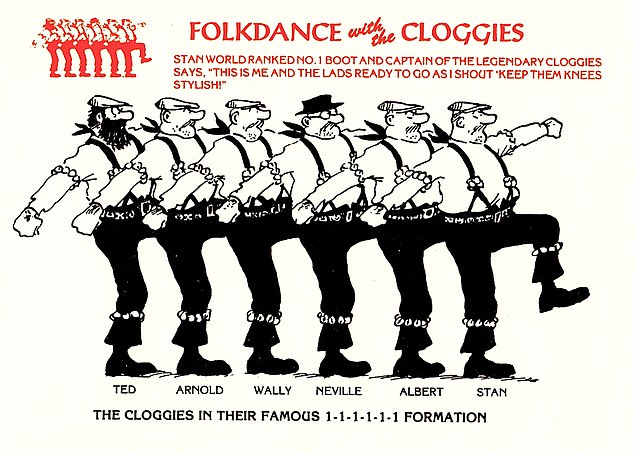 Morris dancing in Gloucestershire is still thriving despite the coronavirus pandemic, as dancers got around social distancing by performing on Zoom

Morris dancing is another casualty of the crisis.

But Gloucestershire’s Lassington Oak Morris Men got round the ban on live performance by celebrating May Day on Zoom.

I wonder how Bill Tidy’s Cloggies — famous for combining dance with extreme violence — would cope with the new technology.

One misplaced Flying Arkwright and there would be fragments of Apple Mac all over the shop.