The “Sex and the City” star penned an emotional tribute to her son, James Wilkie Broderick, as he prepares to graduate high school.

“Into the sunset of his High School career. Field day. The period at the end of a long sentence. And all the sunrises and sunsets in his future,” the actress captioned a photo of the 18-year-old on Instagram. “It’s a milestone. Not fully understood til it’s on your doorstep. And til they cross the threshold into their next mostly mysterious chapter. Just like all the other chapters that are part of the epic novel that is the story of child and parent.”

Although the note was signed from “Mama,” Parker said her sentiments were felt by the whole family: James Wilkie’s dad, Matthew Broderick, and the couple’s two younger children, 11-year-old twins Marion and Tabitha.

“We, all of us Parker-Brodericks are proud, weepy and so looking forward to celebrating your coming graduation,” Parker, 56, wrote. “Enjoy this beautiful day, you have earned it. We love you so dear Son and brother.” 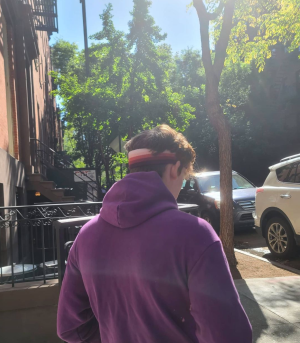 The family’s famous pals sent their own reflections and congratulatory messages on the post.

“I’m crying,” Parker’s close pal Andy Cohen wrote before mentioning his own son, Ben. “I remember James as he started his journey… and now we have Ben starting his right down the street. I’m happy we can all be in each other’s lives for the important stuff. We are all so proud of JW ❤️.”

Parker’s “Sex and the City” co-star Willie Garson added, “Congratulations JW! A teary yet hopeful milestone, full of memories and possibilities….we love you….”

“Beautifully said. This one hit deep,” wrote Reese Witherspoon, a mom of two.

James Wilkie is heading to Brown University, according to his Instagram profile. Parker, meanwhile, is readying to star in the upcoming “Sex and the City” reboot from HBO Max.