A factional war is threatening to derail the Liberal Party’s plans to win key seats at the next federal election in a test for Prime Minister Scott Morrison over preselection challenges against four sitting federal MPs.

In a tit-for-tat fight, conservative Liberals have taken on Mr Morrison’s close ally, Immigration Minister Alex Hawke, by seeking to replace him in the north-west Sydney seat of Mitchell in a rare challenge against a sitting federal minister. 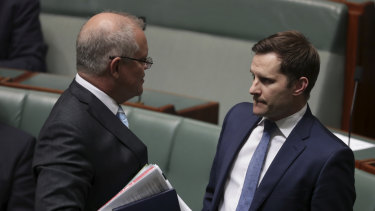 But Mr Hawke’s forces in the “soft right” of the party are also being blamed for launching challenges against sitting MPs, part of a wider shift in allegiances between the party’s factions.

Several party sources told this masthead that sitting federal MPs Trent Zimmerman, Fiona Martin and Melissa McIntosh are all targets in the power play between the party’s “soft right” and “conservative” factions.

Senior federal figures believe Mr Morrison will probably have to intervene to head off a fresh round of infighting and find the best candidates to hold Liberal seats and gain ground against Labor in a crucial state.

The Liberal Party’s review into the last federal election identified NSW as critical to the “worryingly narrow” path to holding power, recommending the party target up to 10 strategic seats over the next two elections. The review said the party needed to convert its voting strength into additional MPs.

The Coalition holds 21 of 47 seats in NSW. Labor holds 24 of the state’s lower house seats, but many of these are considered marginal, including Macquarie, Dobell, Eden-Monaro, Gilmore and Greenway.

Mr Zimmerman is a prominent member of the moderate faction and has held North Sydney since former treasurer Joe Hockey left Parliament in 2015.

Ms Martin is also a member of the moderates and won the seat of Reid, in Sydney’s inner west, against a Labor attempt to take the seat at the last election after the resignation of former minister Craig Laundy.

Ms McIntosh is aligned with Mr Hawke and won the western Sydney seat of Lindsay at the last election after Labor disendorsed its MP, Emma Husar.

Behind the moves is a shift in factional alliances within the NSW division as conservatives work with some of the moderates against the “soft right” and Mr Hawke, making the preselection challenges a possible sign of further turmoil to come.

The Liberals are yet to name candidates in some of the key seats they need to win from Labor if Mr Morrison is to add to the government’s slim majority of one in the lower house.

Mr Hawke is the prime minister’s personal representative on the Liberal Party’s NSW executive and has become a divisive figure within the state division because of his tight control of factional numbers.

Liberal senator Concetta Fierravanti-Wells, of the party’s conservative faction, launched a parliamentary attack on the “party machine” earlier this year for failing to make a “judgment as to integrity” on a messy party stoush.

While she did not name Mr Hawke in her speech to the Senate, she warned “the MP at the centre of the accusations will most certainly be challenged at his next preselection, so 10 new members could make all the difference”.

In October last year he was accused of “appalling behaviour” against colleagues in an email widely sent to executive members and even a Labor MP, alleging he made derogatory remarks to others in the executive, including calling another member “little boy”.

Nominations for a slew of NSW seats were still being finalised on Saturday but likely nominees in some of the key target seats included Sarah Richards in Macquarie and Nell McGill in Shortland – both of whom ran last time – and solicitor and former Liberal staffer Brooke Vitnell in Paterson.

The contest in Dobell is said to be between former Test cricketer Nathan Bracken and businesswoman Jemima Gleeson. Nominations for Eden-Monaro and Warringah have not opened yet but both seats also have female candidates as front-runners.

Fiona Kotvojs is expected to run in Eden-Monaro, after representing the Liberals in the by-election for the seat last year, while the potential candidates for Warringah are said to include state MP Natalie Ward and lawyer Jane Buncle.

Liberals acknowledge, however, it will be difficult to win back Warringah from independent Zali Steggall, who defeated former member Tony Abbott with a significant swing.