Here comes the bridezilla! Social media posts capture their most outrageous behaviour – including a woman who wants to ‘demote’ her bridesmaid because she losing hair due to chemo

Some brides tend to lose their minds when planning their wedding day – with a few becoming entitled and showing outlandish bridezilla behaviour.

People from around the world have taken to social media to share the biggest bridezilla moments they have encountered, with tastyarea.com rounding up a selection of the most shocking posts.

One exchange revealed a bride considered dropping her friend from her bridal party because her hair began falling out during cancer treatment.

Another demanded a free photographer for her big day with a list of other requirements which included bringing their own food. 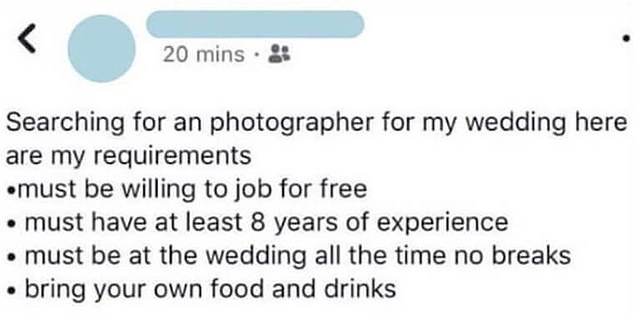 People from around the world have taken to social media to share the biggest bridezilla moments with tastyarea.com rounding up a selection of the most shocking posts, including a bride who demanded a free photographer for her big day 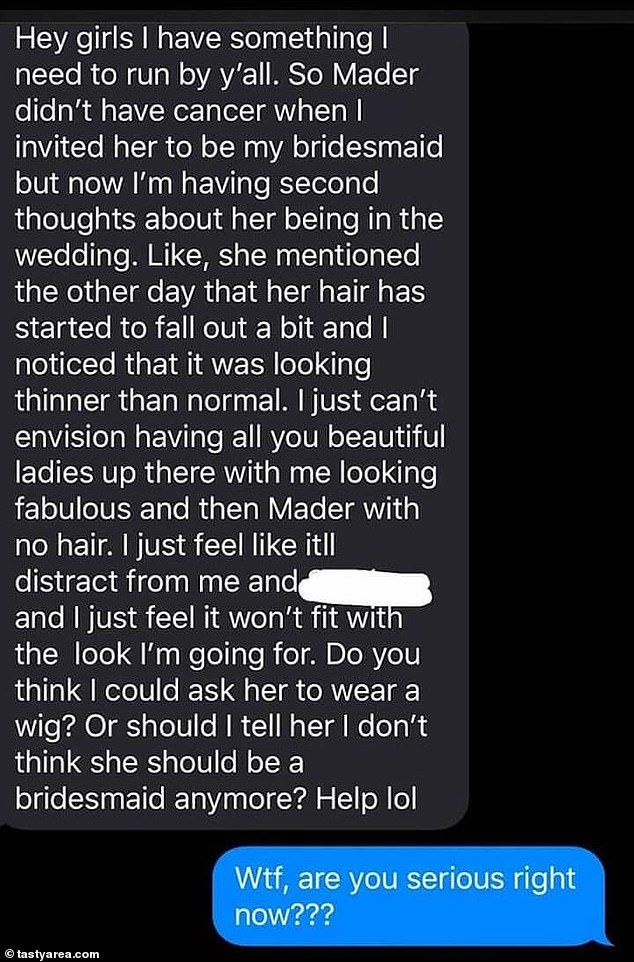 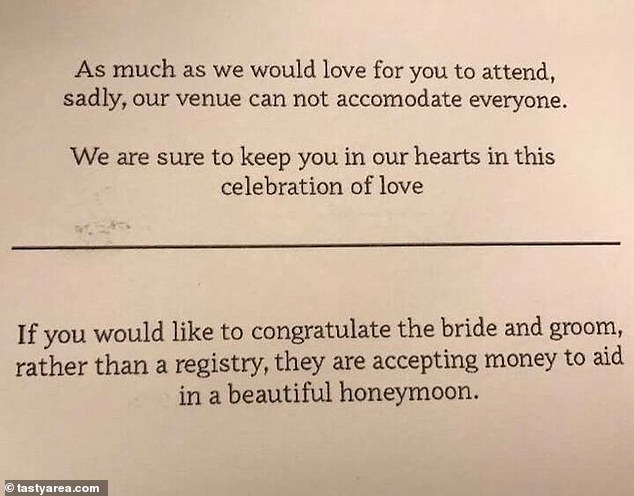 One bride, from an unknown location, asked people who weren’t even guests at the wedding, because ‘the venue can’t accommodate everyone’  for cash instead of presents to ‘aid’ their honeymoon 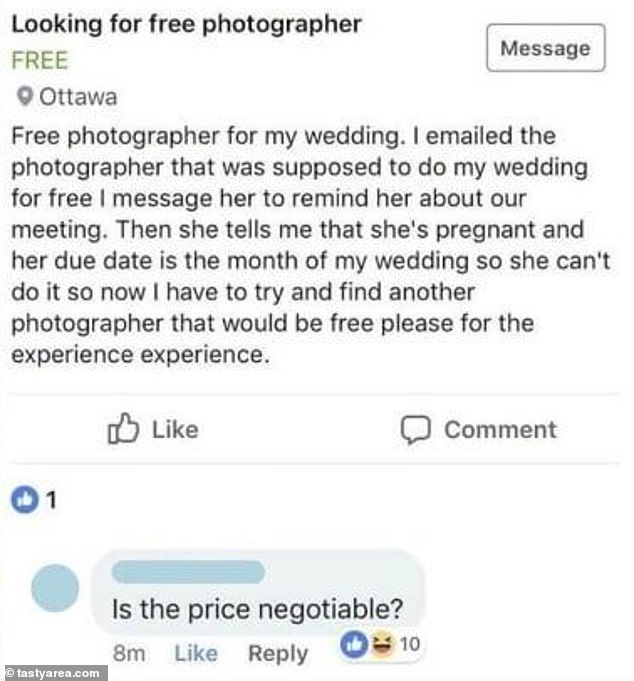 This entitled bride, from Ottawa, was annoyed that her free photographer cancelled on her because she was due the month of her wedding 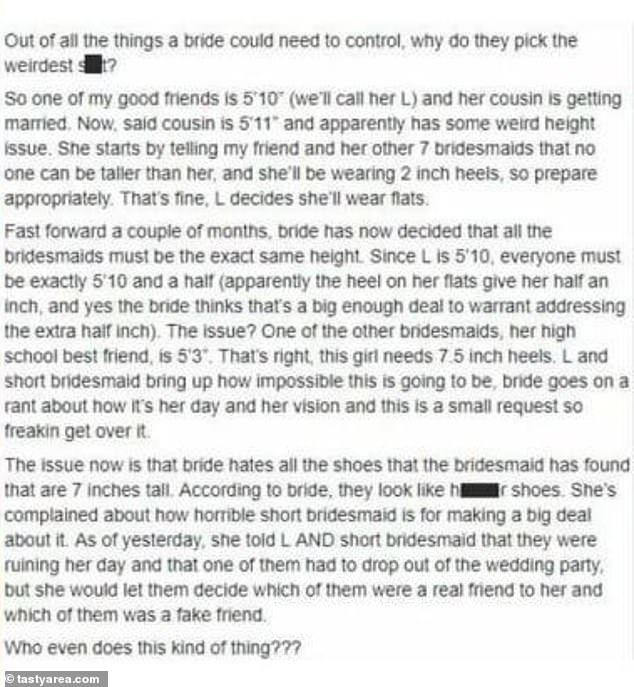 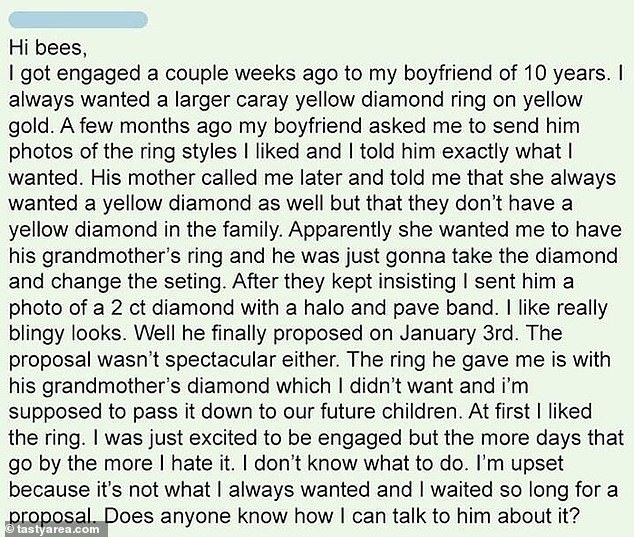 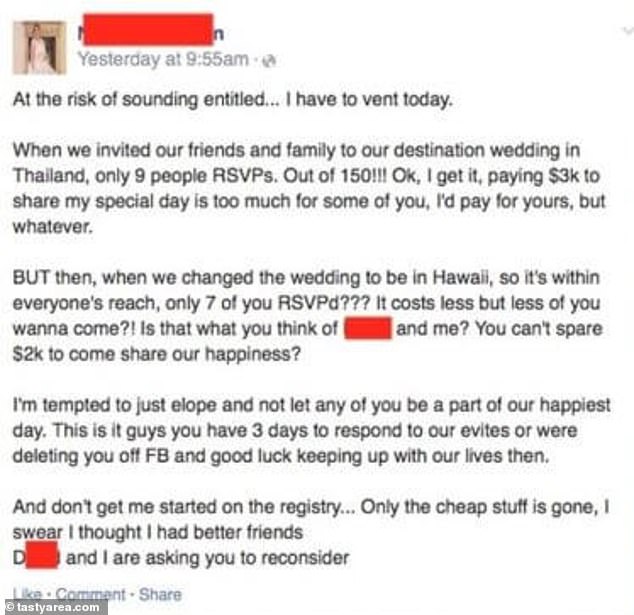 This bride, from the US, expected her friends and family to pay $3,000 to attend her tropical wedding in Thailand 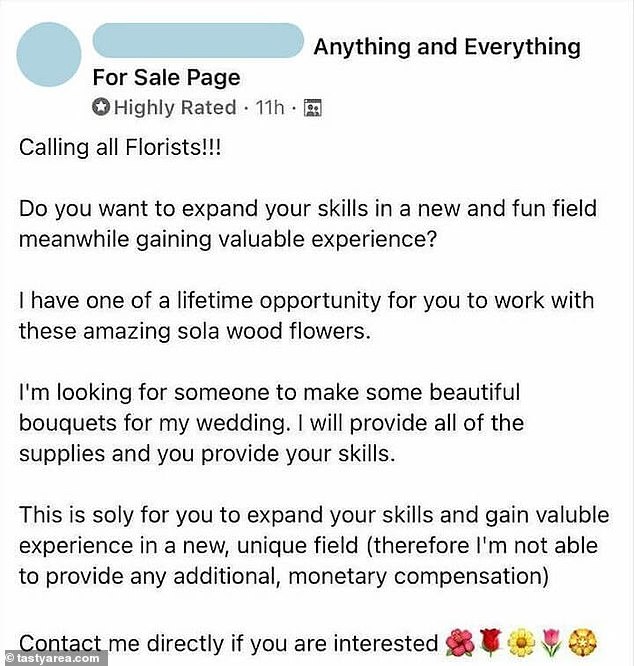 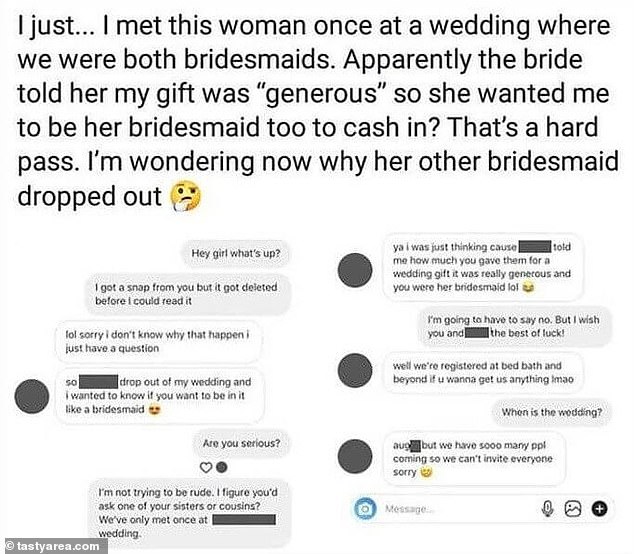 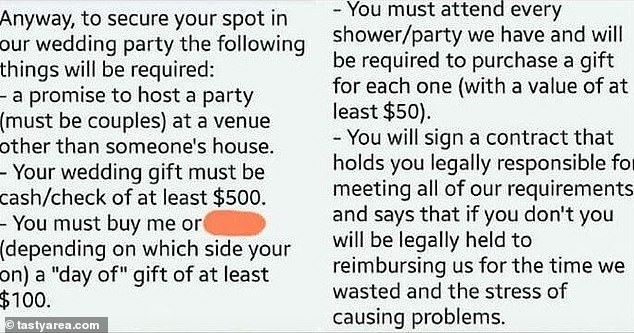 This bridezilla, from the US, demanded her guests give $500 in cash as a gift but they also need to buy the couple a gift worth $100 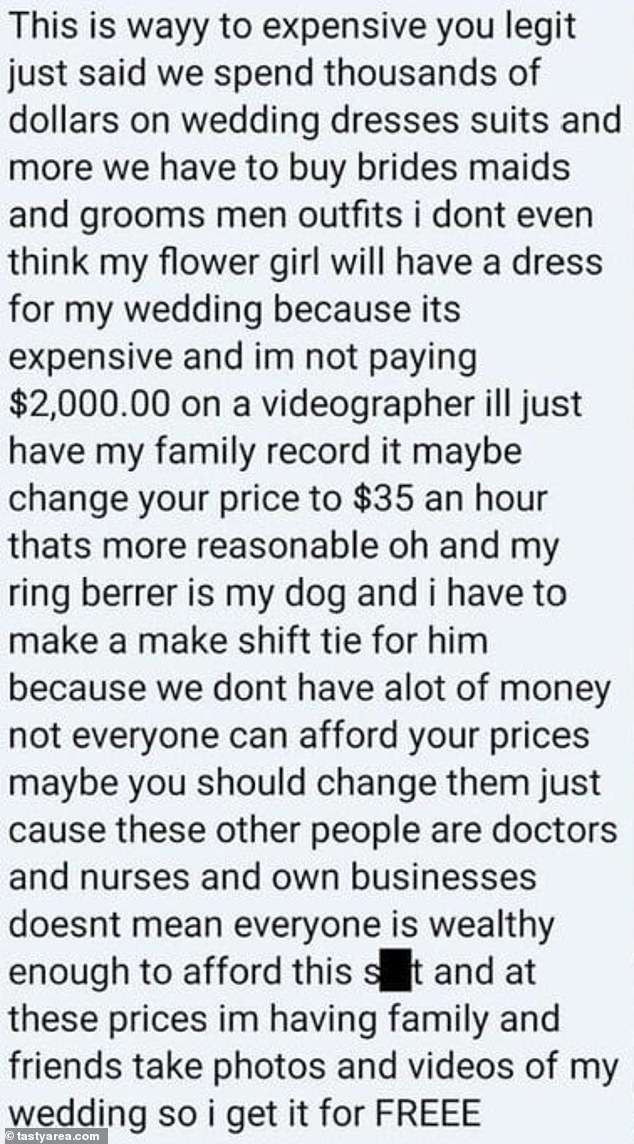 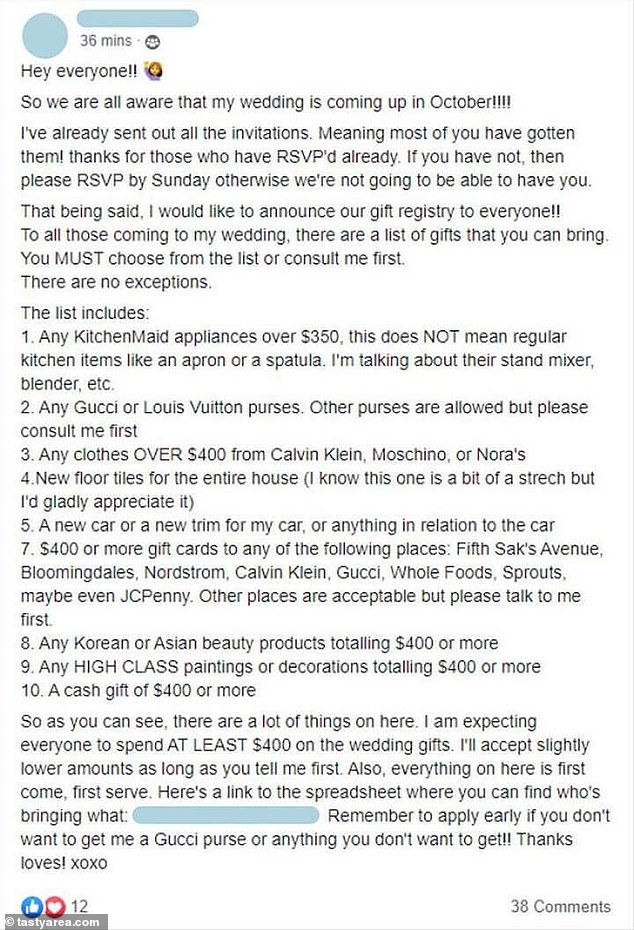 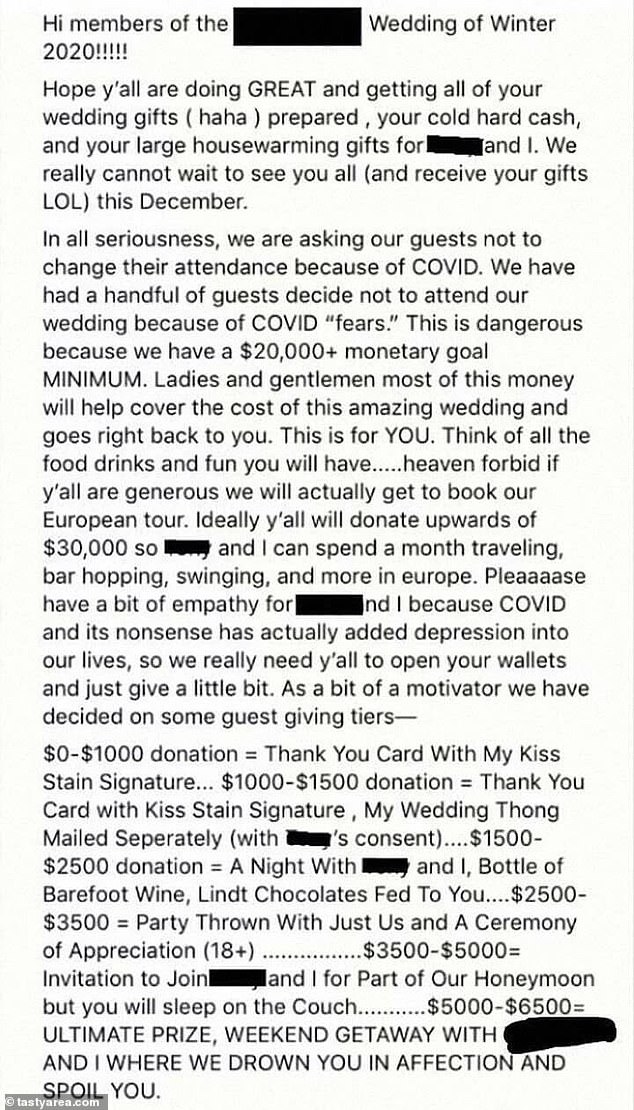 This couple, from the US, sent a message to their guests demanding they not cancel going to their big day because of Covid fears as it would ruin their monetary goal 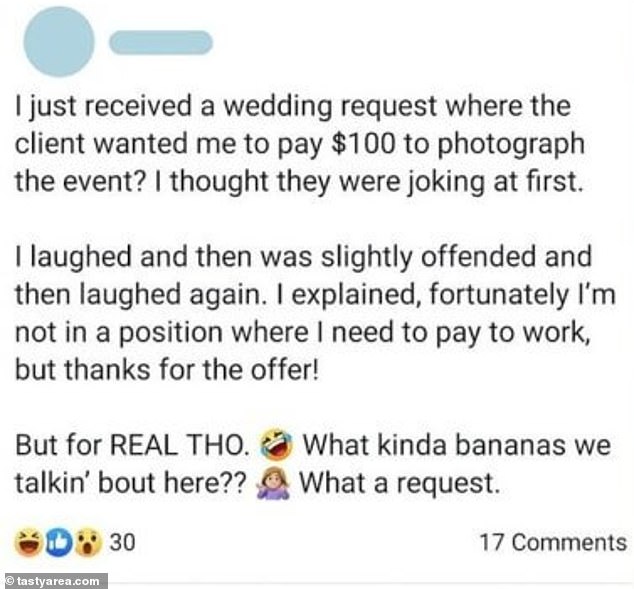 This photographer, from the US, was asked to pay $100 to photograph the couples wedding which ultimately left him confused and offended 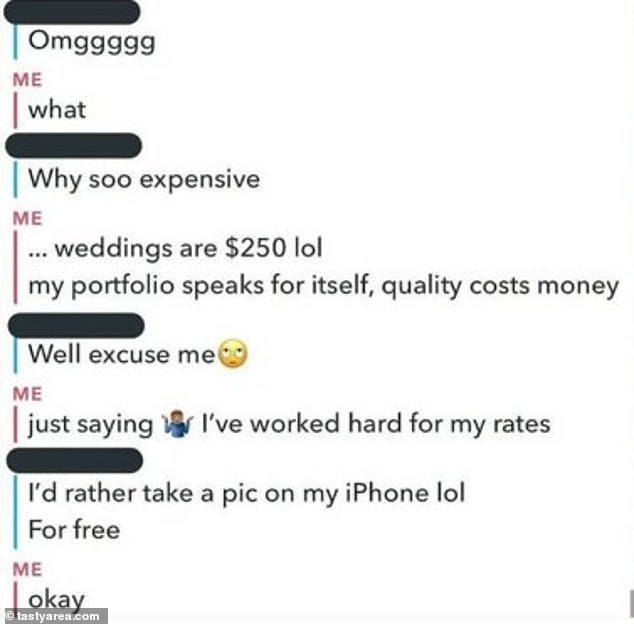 This bride, from the US, said she would rather take snaps on her phone of her own wedding day then pay a professional $250 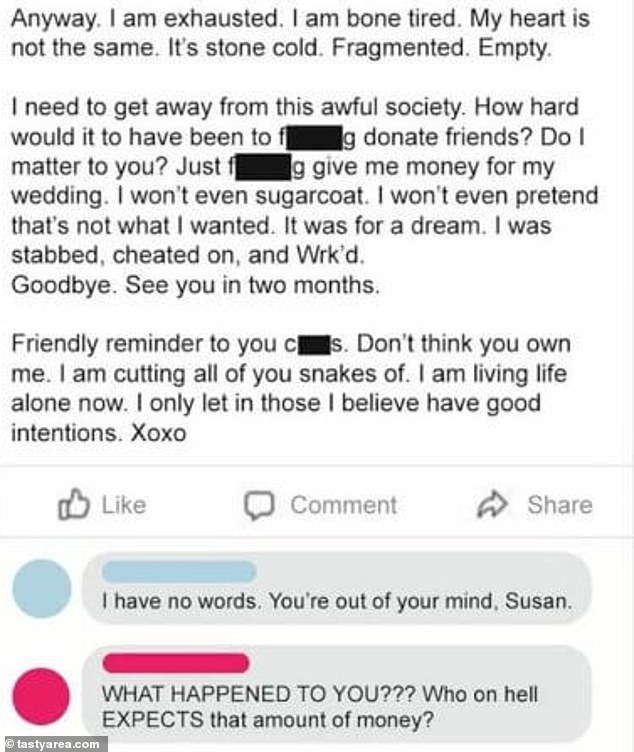