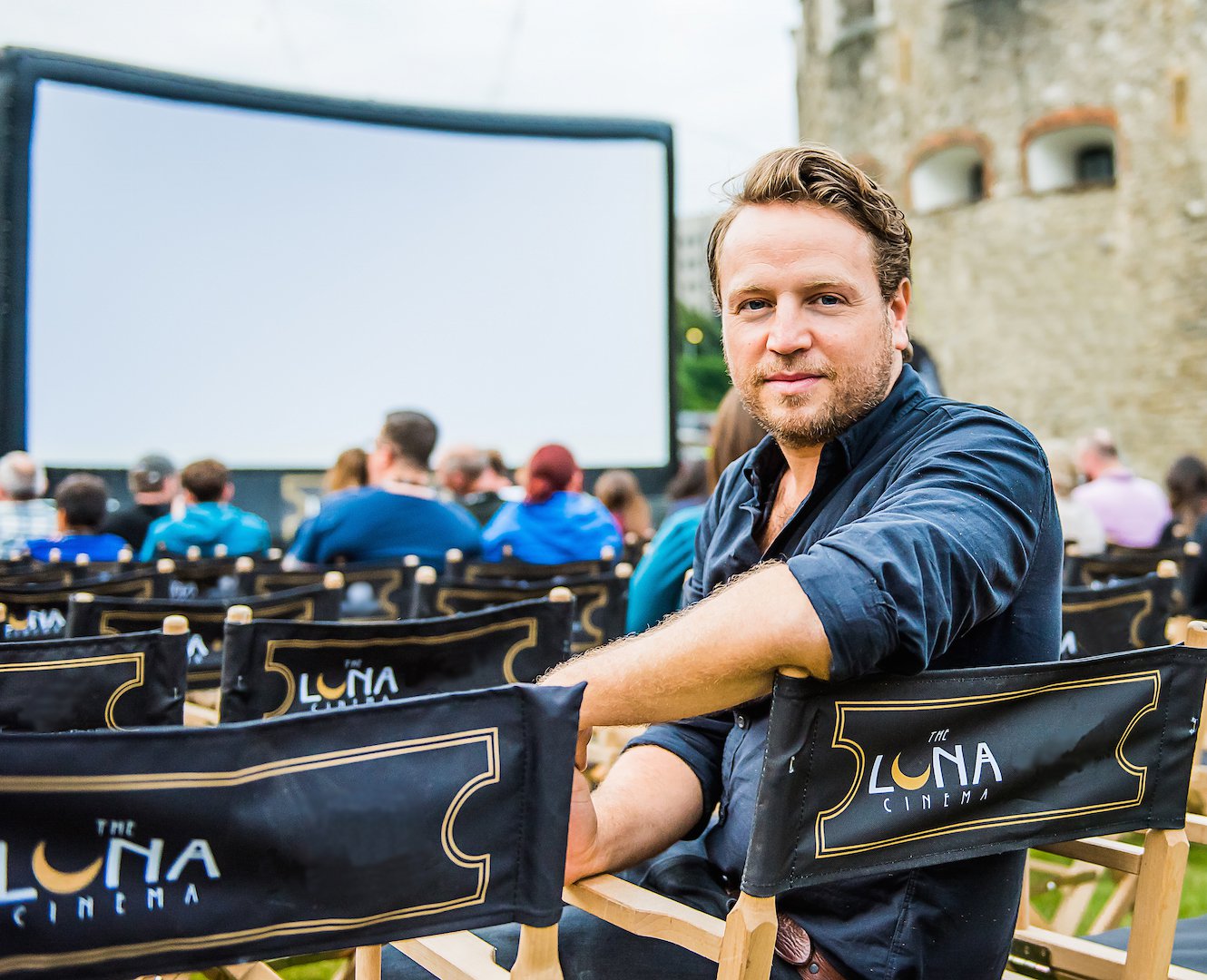 George Wood launched his own outdoor cinema company after an accident in 2008.

But what started as a small screening in Dulwich Park is now the UK’s leading open-air cinema provider, travelling to venues across the country.

We found out more about how George grew his business — including the ingenious way they coped through Covid.

You were a child star, right?

I acted from the age of ten and went to the Sylvia Young Theatre School so I assumed I’d be a jobbing actor.

My peak of fame was singing — badly — in Annie 2. But my agent told me that casting directors take a break over summer so at the back of my mind I thought, ‘I want a little business to keep me going over the summer months.’

I’d visited Australia and been to an open-air cinema, and the thought of doing something similar in the UK was always at the back of my mind.

I had my lucky break – literally. I was riding my motorbike into the West End to appear in a play when I swerved to avoid a car at Elephant and Castle and fell off, breaking both bones in my right leg.

I was taken to hospital by ambulance and the doctor told me I couldn’t work for six months. I remember lying in the hospital bed with my leg up, pumped full of morphine, thinking, ‘I should use this time to try the cinema idea.’

So I rang Dulwich Park from my hospital bed and asked if they had ever had an open-air cinema screening. They asked: ‘Is this what you do?’ and I looked at my leg in traction and said, ‘Yes!’

I left hospital, hobbled along to a meeting on crutches and in summer 2008 we hired a big screen, let the readers of a local magazine vote for the film they wanted — they chose Some Like It Hot – and tickets for the first ever Luna Cinema screening sold out instantly. I never acted again and that was a good thing — I was a terrible actor!

How do you get hold of a giant cinema screen?

Pure fluke. I googled ‘manufacturer of big screens’, found the name of a man in Germany, rang him and he said, ‘You’re the first person to call me from the UK.’

He had just patented the first inflatable cinema screen. He used to make bouncy castles and realised that, reversed, they could make greatscreens — and this meant that instead of scaffolding and hours of work, we could have a ten-metre inflatable screen up in just 45 minutes.

It meant I could persuade royal palaces to use their grounds. I hired all the kit, then invested my life savings into buying a screen and projector, found theatre technician and hired a team.

We don’t have wall-to-wall sunshine like the Aussies but Brits are used to making the best of wet summers and we’re spoilt for choice with incredible backdrops. Once Hampton Court Palace agreed, they spoke to Warwick Castle and then they told Leeds Castle.

One of our surprise smash hits was The Greatest Showman. It didn’t have
rave reviews when it was first released but it quickly gathered a cult following.

When we showed it, we sold every ticket and the audience would sing along to every song and cheer along. Just watching their reaction to this — and to Dirty Dancing — made it clear there was something special about these films. But other films don’t work in outside cinema.

In 2010 we showed Borat and I persuaded Pamela Anderson to record an introduction to the film. I thought, ‘This is such a coup,’ and I thought it would play out to an audience of thousands. But in reality we sold about 25 tickets.

It just didn’t translate to a communal outdoor event and maybe it’s because the film is a bit near to the bone and people just want to laugh in the privacy of own homes.

And then came Covid…

Everything we’d been planning wentout of the window overnight. It felt as if the last decade’s worth of growth was being undone in a matter of days, tumbling all around me. I couldn’t eat or sleep and it was a scary time because I felt so responsible for staff.

But we launched the Luna Drive-In Cinema as our route out of Covid — and thank goodness we did as it was our lifeline. We had to work out how to do a drive-in amid Covid restrictions, working on remote ordering of food and drink, licence-plate recognition and making sure audiences didn’t have to get out of their vehicles.

I had avoided drive-in cinema for 12 years but Covid changed that and it saved our business.

Mistakes, you’ve made a few?

In the early years I used to miss friends’ weddings because I invested everything into the business and I still have a pang of regret now. In fact, when my partner was in labour with our first baby, I asked the doctor how long he thought it would take because I had an important site visit.

I remember him looking at me slightly strangely. I made it to the meeting and labour turned out to take two days, so I got away with that. But in terms of screening mistakes, in 2009 we showed Some Like It Hot in Canterbury and all my family came along.

Nobody speaks for the first six minutes of that film and when they did, it was in French — we’d inadvertently switched the output to French. I had to grab the microphone, apologise and restart the film. Of course, my family still tease me.

They say, ‘George runs Luna and he plays films — sometimes even in the right language!’ Another blooper was accidentally showing the director’s cut of Gladiator in a ruined Roman abbey, which was freezing.

We only realised our mistake when the film started — and by the time it finished we felt like we had lived through the entire Trojan War. Honestly, the mistakes we made in our earlyyears make me cringe now but we really learned from them.

For more details on The Luna Cinema visit their website here.

If you want more tips and tricks on saving money, as well as chat about cash and alerts on deals and discounts, join our Facebook Group, Money Pot.

How to get your Metro newspaper fix

Metro newspaper is still available for you to pick up every weekday morning or you can download our app for all your favourite news, features, puzzles… and the exclusive evening edition!