The Transportation Security Administration (TSA) is asking passengers to “remain calm and respectful” at security checkpoints following a series of incidents involving unruly travelers, including one who allegedly bit two agents.

The biting incident occurred earlier this month in Denver and remains under investigation, the TSA said Thursday. In another occurrence, a passenger in Louisville, Ky., assaulted two TSA officers while attempting to “breach an exit lane,” the agency said.

That suspect faces state charges for criminal trespass, fleeing and evading police, assault and resisting arrest. Both passengers face up to $13,910 in fines, a TSA statement said. 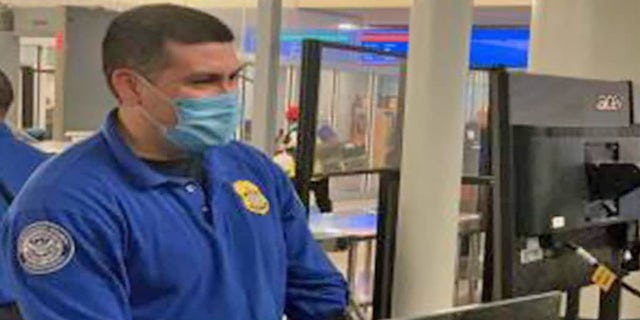 A Transportation Security Administration officer stands at an airport checkpoint. On Thursday, the TSA asked passengers to act calm and respectful at checkpoints amid a series of incidents involving unruly passengers.

“Passengers do not arrive at an airport or board a plane with the intent of becoming unruly or violent; however, what is an exciting return to travel for some may be a more difficult experience for others, which can lead to unexpected, and unacceptable, behaviors,” TSA Senior Official Performing the Duties of the Administrator Darby LaJoye said in a news release.  “We appreciate our continued partnership and coordination with the FAA and stand together in a unified position of zero-tolerance with respect to attacks against our employees.”

In May, the Department of Homeland Security issued a stern warning to travelers in anticipation of the summer months, making it clear that passengers who misbehave will be punished.

The Federal Aviation Administration took 3,062 reports of unruly passenger incidents from Jan. 1 through June 20, the agency said. Of that, 487 investigations were initiated.

The numbers are a sharp increase from last year, when the FAA initiated only 183 investigations during the pandemic. Several incidents of passengers being combative with flight crews over airline social distance and mask policies have gone viral in recent months.

Security officers have also been targeted. Since the beginning of the coronavirus pandemic, there were 69 incidents in which TSA employees were physically assaulted, the agency told Fox News. Since directives requiring masks in public transportation went into effect, the agency has initiated 1,700 compliance investigations, it said. 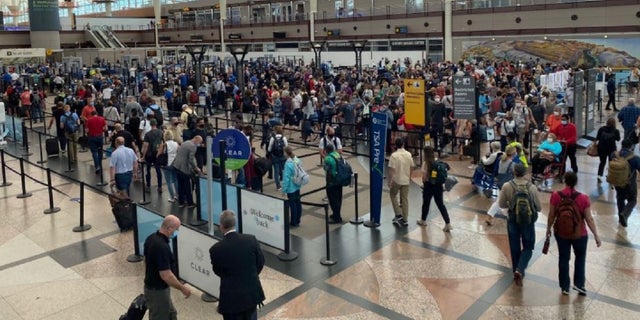 Travelers wait on line for a security screening at Denver International Airport.

“These incidents needlessly interrupt travel, delaying flights and other transportation operations across the country,” the news release said.

A federal mask mandate remains in effect on airplanes, trains, buses and other forms of public transportation. Airports across the country have seen 1.9 million people screened at checkpoints during the Memorial Day weekend last month, the TSA said.