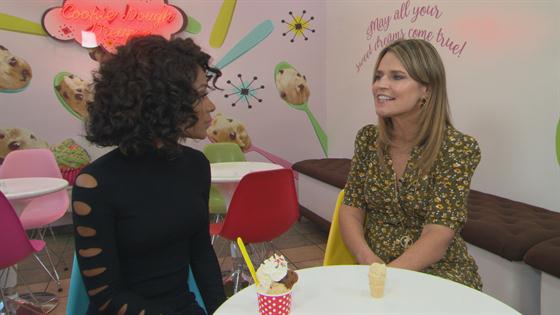 Savannah Guthrie had a few unexpected guests on Thursday’s episode of Today.

The anchor’s 3-year-old son Charley crashed the morning show to give his mom a little extra love.

“I think it was 6:45, Savannah’s getting ready, doing teases. Who decides it was time to curl up and snuggle up with mama? Charley!” Hoda Kotb said.

It wasn’t long before his 5-year-old sister Vale decided to join in on the fun.

Like many people, Guthrie has been working from home amid the global coronavirus pandemic.

“In the sixth week of home basement broadcasting, we’ve really broken the seal,” she said. “The duct tape on the door has been lifted and here they are.”

The kiddos then waved to Kotb, Al Roker, Craig Melvin and all of the viewers.

“I think this just should be our permanent morning boost,” Kotb said.

The children certainly stole the show. From Charley helping Guthrie with the tease to both little ones wishing guest and Food Network star Valerie Bertinelli a happy birthday, there were several adorable moments. Even Guthrie quipped they are “ready for their closeups.”

“Cutest co-hosts ever!” Today tweeted along with footage from the show.

Meanwhile, Roker said he couldn’t get his son Nick to make an on-air appearance.

“He’s a full-blown teenager now. Forget about it,” he said.

Watch the video to see the kids’ takeover.

(E! and NBC are both part of NBCUniversal).