A Long Island man who allegedly knifed his father to death while his dad was chatting on Zoom nearly decapitated him, a report said Friday.

Thomas Scully-Powers, 32, allegedly confessed to police after the afternoon killing in Amityville on Thursday, it was revealed in court, Newsday reported.

“He kept breathing, so I had to keep stabbing him,” Scully-Powers told police, a prosecutor said at his arraignment Friday, according to Newsday.

The son used several knives in the attack and sliced his father’s throat to the bone from ear to ear, prosecutors reportedly said.

He also admitted to stabbing his father several times in the chest, then turning him over and plunging a knife into his back, according to the report.

The victim, 72-year-old Dwight Powers, was found dead at the home he shared with his son on Dixon Avenue after other participants on the video conference called 911, police said.

Scully-Powers jumped out of a window to avoid arrest, but was captured a short while later trying to wash himself off with Dr. Pepper stolen from a nearby deli, Newsday reported.

He was ordered held without bail and at his arraignment on murder charges, the newspaper reported.

The pandemic and lockdown have tanked the economy and government revenues. State Sen. Liz Krueger (D-Manhattan) told Newsday the answer is “ensuring that those with the most are pitching in their fair share and those with the least are not made to bear a disproportionate burden.”

Never mind if that “fairness” kills the businesses she wants to milk or pushes high earners to give up on New York. Plenty are already eyeing the exits, since it’s hard to see how to virus-proof dense urban areas.

As it is, the top 1 percent of earners pay 46 percent of New York income taxes. That’s a lot of revenue to lose if only a few of them skip to Florida.

Some Democratic state lawmakers want a new tax on billionaires; others favor a stock-transfer tax, a pied-à-terre tax on second homes, surtaxes on hedge-funders, new levies on big corporations that got federal tax breaks in 2017 and on and on.

The legislative Robin Hoods talk about their plans as “shared sacrifice.” But the sacrifice-ees can vote “no” with their feet. The Empire Center’s E.J. McMahon points out that the stock-transfer tax, in particular, will simply push a mobile industry to perform its transactions anywhere but here.

It’s beyond sad when the plan is to kill the golden goose.

Another two of the Empire State’s economic regions are on the verge of reopening, Gov. Andrew Cuomo said Sunday, as an additional 139 New Yorkers succumbed to the coronavirus.

The only box left to tick is an expansion of their contact tracing capacity, Cuomo said, offering the state’s help to get the regions up to snuff.

“They are now qualified for reopening,” said Cuomo during an Albany press briefing. “We’ll be working with both the Capital Region and Western New York to get that tracing up. But that is a purely administrative function.

“Working together with the regions, we can get that done.”

Planned tailoring of the total hospitalization and fatality metrics in regions where those numbers were so consistently low that measured decline was difficult to gauge helped get those two sectors to the finish line, according to the governor’s office.

Five other regions — Central New York, the Finger Lakes, the Mohawk Valley, the North Country and the Southern Tier — have already begun the first phase of reopening, which includes such low-risk businesses as construction, manufacturing, landscaping and curbside pick-up retail.

Long Island, the Mid-Hudson and New York City are still on the outside looking in, with the Big Apple the farthest off, having met just three of the seven criteria through Sunday.

Cuomo teased the good news for Western New York and the Capital Region as deaths continued to mount statewide.

Another 139 New Yorkers were lost to the bug in the 24-hour period ending at midnight Sunday, raising the overall toll to 22,619 confirmed fatalities.

“At a different time and place if I had that news to deliver, that would be incredibly shocking to people,” said Cuomo. “Only in this environment is it not shocking and, relative to where we were, it’s good news.”

Empire State renters hit hard by the coronavirus can rest easy for another few months, as Gov. Andrew Cuomo on Thursday extended a moratorium on non-payment evictions through August 20.

“The number one issue that people talk to me about probably is rent, and fear about being able to pay their rent,” said Cuomo in a press briefing in Valhalla, NY. “And this just takes that issue off the table until August 20.”

With the coronavirus and resulting shutdowns driving massive unemployment, Cuomo first issued the moratorium on March 18, set to run through June 18.

But the extension now buys down-on-their luck New Yorkers another two months, with both residential and commercial renters covered.

Additionally, Cuomo on Thursday banned late fees for any payments missed during the moratorium, and green-lit renters under financial duress to use their security deposits as payment, repaying the deposits over time.

“I hope it gives families a deep breath,” he said. “We’ll figure out between now and August 20 what the situation is.”

The announcement came hours before New York City’s Rent Guidelines Board was set to convene Thursday evening for a preliminary vote on rent hikes for the coming year.

Mayor Bill de Blasio last month ordered the body — of which he appoints all nine members — to approve a rent freeze.

Cuomo said that he was sympathetic to the concerns of landlords, who have their own obligations to meet during the pandemic.

“We’re working on relief from the banks for the landlords also,” said Cuomo. “But on a human level, I don’t want to see people and their children being evicted at this time through no fault of their own.” 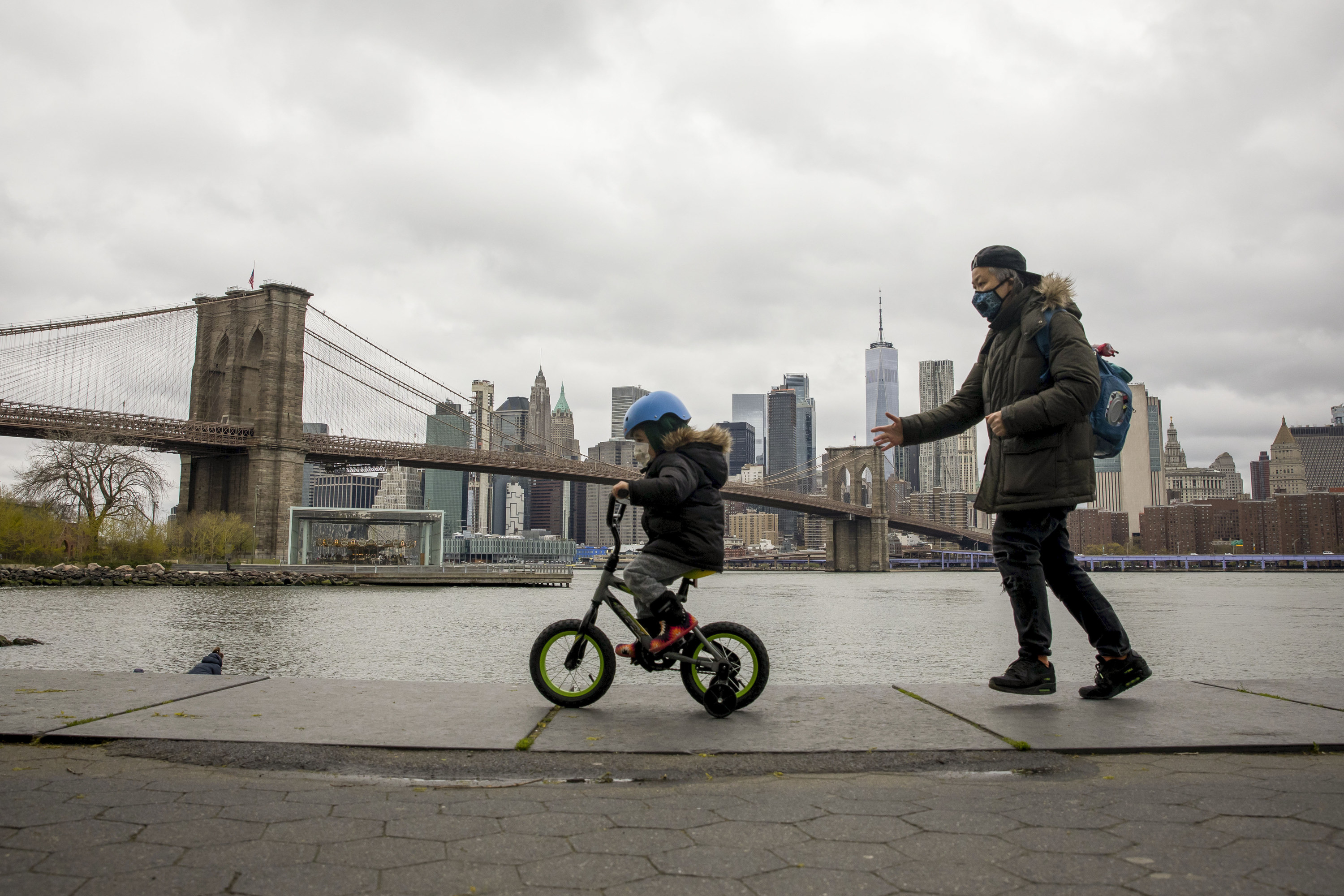 A child riding a bike in New York City.

Fifteen children in New York City were recently hospitalized with a mysterious inflammatory illness that health authorities say could potentially be associated with COVID-19.

The New York City Health Department issued an alert to providers Monday about “a pediatric multi-system inflammatory syndrome” observed in some children and young adults in the city that has also recently been reported by UK health authorities.

Only a small number of cases have been reported in some European countries so far, and global health officials have reassured parents that the illness is very rare.

While NYC health authorities said the “full spectrum of the disease is not yet known,” the 15 patients showed symptoms associated with toxic shock syndrome or Kawasaki disease, a rare childhood illness that causes inflammation in blood vessels.

The patients, aged between 2 and 15 years, were admitted to pediatric intensive care units between April 17 and May 1, with symptoms including fever, rash, abdominal pain, vomiting, or diarrhea. Respiratory symptoms were reported in less than half of these patients, the health department said.

None of the 15 patients in New York City died.

“Even though the relationship of this syndrome to COVID-19 is not yet defined and not all of these cases have tested positive for COVID-19 by either DNA test or serology, the clinical nature of this virus is such that we are asking all providers to contact us immediately if they see patients who meet the criteria we’ve outlined,” NYC Health Commissioner, Dr. Oxiris Barbot, said in a statement.

Barbot said the city’s health department was alerting providers about this “recently recognized syndrome in children so that they can be diagnosed and treated early to avoid long-term complications.”

“And to parents, if your child has symptoms like fever, rash, abdominal pain or vomiting, call your doctor right away,” she said.

Last month, health authorities in the UK sent out a similar alert highlighting a “small rise in the number of cases of critically ill children presenting with an unusual clinical picture.”

Many of the children had tested positive for COVID-19 and showed symptoms of toxic shock syndrome or Kawasaki disease, UK health authorities said.

“It is important to highlight that, both in the UK and in other countries, there have still been very few cases of critically unwell children with COVID-19 admitted to paediatric intensive care units,” the Paediatric Intensive Care Society UK, said in a statement.

At a COVID-19 news briefing last week, a World Health Organization official said they were aware about reports in the UK and some other European countries about a “small number” of such cases among children but assured parents that the illness appeared to be “very rare.”

“There are some recent rare descriptions of children in some European countries that have had this inflammatory syndrome, which is similar to the Kawasaki syndrome, but it seems to be very rare,” Dr. Maria Van Kerkhove said at the briefing.

While she said the reports of this rare illness were important for clinicians to better understand the possible effects of coronavirus, she reassured parents that the vast majority of children who get COVID-19 have a mild infection and recover completely.

Scientists are still working out the effects of the virus on different organs. Some evidence suggests that the virus could attack the cells lining blood vessels, also causing damage via the immune system’s resulting inflammation-causing response, which may be contributing to blood clots in some coronavirus patients.

As of Sunday, six children between the ages of 0 to 17 have died of COVID-19 in New York City, all of whom had underlying conditions, according to the health department.