“The Donut King” and “Happy Cleaners” are just two films that highlight the AAPI immigrant experience. 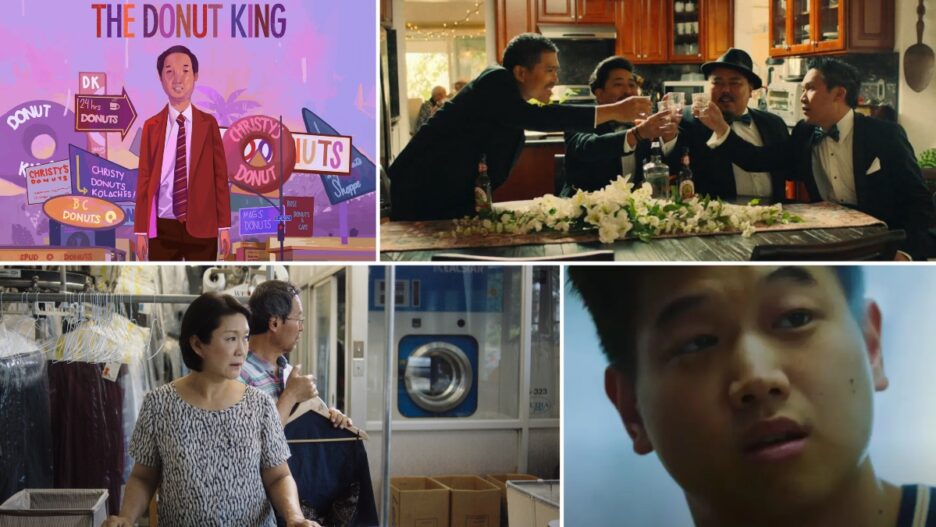 As Asian American and Pacific Islander Heritage Month continues, several newer films with AAPI stars and/or creators are available on streaming. Check out their descriptions and how to watch them, below:

From filmmaker Alice Gu, “The Donut King” traces the twisty, unexpected journey of Cambodian refugee Ted Ngoy, who arrived in California in the 1970s and, through a mixture of diligence and luck, built a multi-milion dollar donut empire up and down the west coast.

After escaping the brutal Khmer Rouge in Cambodia, Ngoy started a new life in America as a church custodian and eventually parlayed hard luck and opportunity into the opening of his first donut shop in Orange County, California. His Christy’s Doughnuts became a rapidly expanding chain of success, and over the next decade, Ngoy also sponsored hundreds of visas for incoming Cambodian refugees and offered them steady employment in his donut shops. But after living his version of the American Dream, everything came crashing down for Ngoy.

Stream “The Donut King” on PBS Independent Lens beginning May 24 at 10 pm ET.

When a new landlord comes around, Mr. and Mrs. Choi find their dry cleaning business, Happy Cleaners in Flushing, Queens, in jeopardy of closing after 17 years. While they make every effort to save the business, their daughter Hyunny and son Kevin are also at their own tough crossroads of life under the pressure of their parents’ high hopes. Struggling through economic turmoil, cultural clashes, and a generational divide, the Choi family realizes that the only way to be stronger is to embrace each other.

Directed by Julian Kim & Peter S. Lee with writer/producer Kat Kim, “Happy Cleaners” is a heartfelt story that celebrates the survival of immigrants, the experiences of the Korean-American community, and the value of family.

“Lonely Blue Night is” a portrait of a Chinese family in which a mother and daughter reunite on one lonely blue night.

“Fine China” follows a determined daughter as she uses music and dance to express all that goes unsaid in her Chinese household.

“Si” is a story of an Asian-American boy who navigates micro-aggression with his friends through seemingly innocent jokes and games after baseball practice.

All three shorts are available to stream on HBO Max. This year’s submissions are currently being judged.

Four vignettes follow the four brothers while their Fil-Am family prepares for the ultimate Filipino event, a wedding. A blue-collar family, they share the same house save one, the Golden Child. The Eldest Brother must secure his pride and position in the family by paying for the wedding. This leads him to revisiting his old life as a hustler to make ends meet. The Golden Child is stuck in The Philippines the day before the wedding, and meets a lover from the past. The Youngest and most single connects with a new love…who may be his cousin. The Middle Brother breaks out of a deep depression following the loss of a child using a dating app for the first time.

“The Fabulous Filipino Brothers” is actor Dante Basco’s directorial debut and stars his real-life brothers. Basco shared with TheWrap how he got advice from “Crazy Rich Asians” helmer Jon Chu before taking the director’s chair.

Welcome to America: Where dreams come true…ish. A break from the traditional romantic comedy, “Americanish” highlights different layers of womanhood as they intersect with cultural and societal expectations. “Americanish” invites viewers into the home and lives of three marriage-aged women as they navigate the often turbulent waters of romance, culture, career, and family.