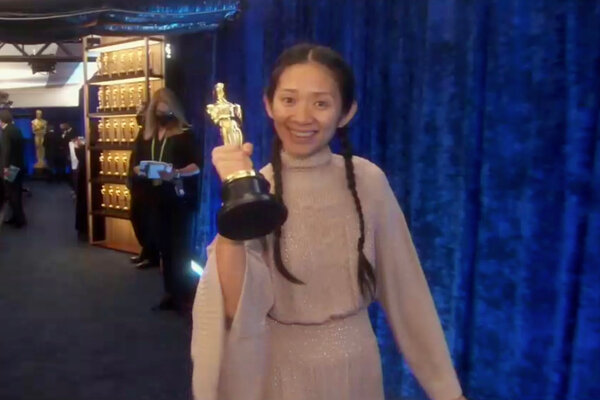 Chloé Zhao on Sunday became the first woman of color, first Chinese woman and second woman ever to win the Oscar for directing, capping off a historically impressive run of honors she has amassed this awards season for her work on the drama “Nomadland.”

In accepting the award, Zhao recalled a phrase she had learned as a child that she said translated to “people at birth are inherently good.”

This year’s Oscars marked the first time in its history that more than one female filmmaker was nominated for the best director in a single year. In addition to Zhao, Emerald Fennell scored a nomination for “Promising Young Woman.”

Before this year, only five female filmmakers had been recognized in the director category. In 2010, Kathryn Bigelow became the first and only woman to be named best director until Zhao won the category on Sunday.

Earlier in the awards season, Zhao took home the top directing prize at the Golden Globes, the Critics Choice Awards and the Directors Guild Awards and she has won similar accolades from several other groups.

“Nomadland” has also garnered wide praise and several honors. The movie tells the story of a widow who travels the country in a van and joins the itinerant work force while connecting with other Americans she meets along the way. Zhao adapted the movie from Jessica Bruder’s nonfiction book of the same name and used several nonprofessionals in the cast, including people featured in Bruder’s book.

Zhao, who adapted and helped produce “Nomadland,” was nominated for four Oscars in all: directing, adapted screenplay (which she lost to Christopher Hampton and Florian Zeller of “The Father”), editing and best picture.