Yasmeen (played by Shelley King) has been isolated from her friends and family by Geoff Metcalfe (Ian Bartholomew) but there are still some Coronation Street residents who are concerned about her. Tomorrow night, Geoff will take Yasmeen for dinner with Sally (Sally Dynevor) and Tim (Joe Duttine), forcing her to wear a dress he bought for an escort and make her feel incredibly uncomfortable.

When they return home, Yasmeen will be so humiliated, she will attack Geoff out of fear and caller 999 worrying she has killed him.

The residents will turn against her but Peter Barlow (Chris Gascoyne) could be the one to reach out and help Yasmeen open up about what she has been going through.

Tomorrow night’s preview clip hints Peter will become concerned about Yasmeen when he spots her looking uncomfortable in the Rovers Return.

In the clip, Sally commented: “Oh I feel a bit underdressed. Yasmeen you look, how does she look Tim?” 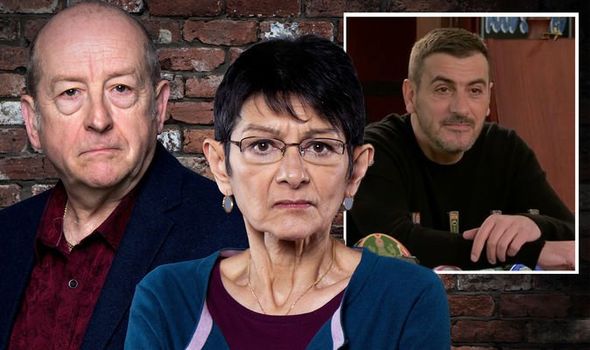 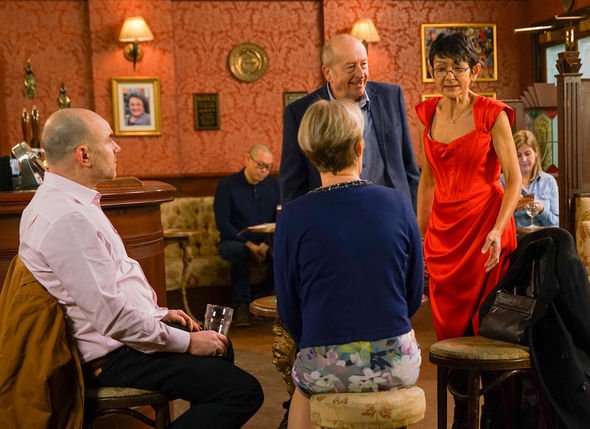 Tim complimented Yasmeen on her bright ill-fitting dress but the Speed Daal worker seemed uncomfortable and told the couple: “Yeah surprised me with this but if it’s too much, I can go home and change.”

Geoff insisted his wife stay in the Rovers Return as he wanted to get some pints for the table.

Yasmeen told Tim and Sally she was looking forward to their meal and it was “terribly good” of them to take her out.

“Oh you’re looking, after everything you’ve done for us,” Tim replied which left Yasmeen concerned.

As Geoff got the drinks in to celebrate, Tim insisted on paying leave his dad free to return and sit next to Yasmeen. 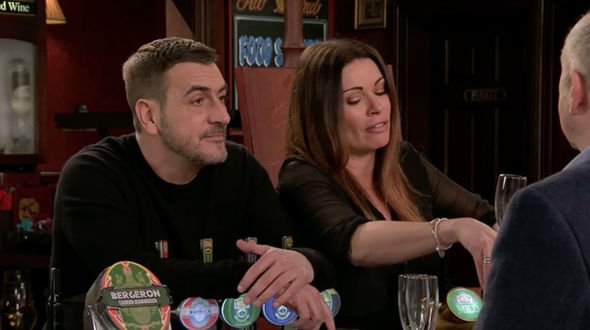 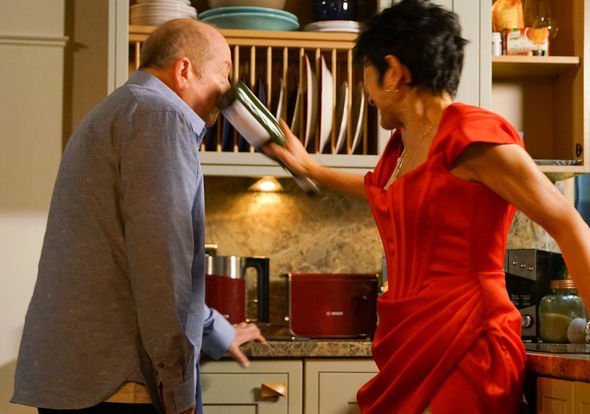 While Yasmeen continued to squirm, Geoff warned her: “They are laughing at you. I’m not having it.”

Yasmeen tried to calm her husband down telling him not to worry and ignore the teasing.

As Tim returned to the table with a bottle of champagne, Yasmeen jumped up to pick up the glasses.

But as she approached the bar, Peter looked at her with concern.

Fans will know Peter was on hand to offer support to Yasmeen when Geoff told everyone she had a drinking problem.

Earlier this week when Yasmeen discovered she had an STI and panicked outside the medical centre, Peter rushed over to check she was okay.

Peter has been keeping a watchful eye on Yasmeen ever since and when she gets up from the table in the preview clip, it’s clear the bookmaker has been watching the group.

Could it be Peter who reaches out to help Yasmeen when he hears from her granddaughter Alya Nazir (Sair Khan) that Geoff made up her drinking problem?

Having spoken to Peter before, Yasmeen could find it is easier to reveal the true extent to him, trusting he will keep their conversations confidential.

But it’s not just Peter who has started to become more concerned about Yasmeen as Geoff’s daughter-in-law Sally has started to pick up on her distress.

In tomorrow night’s preview clip, when Yasmeen leaves the table, Sally asks if she is okay and wants her to come with her.

While Yasmeen dismisses Sally’s offer, next week will see Alya try to persuade her neighbour that Geoff has been abusing her grandmother.

Sally and Peter could prove to be important allies of Yasmeen’s as Tim and the rest of the street turn against her.