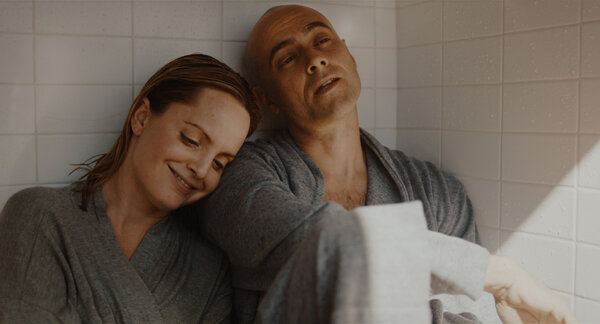 When you purchase a ticket for an independently reviewed film through our site, we earn an affiliate commission.

If you can make it through the first ten minutes of “Grace and Grit” without groaning, then your tolerance for New Age folderols, saccharin voice-overs and seraphic gazes is higher than mine.

Based on the American philosopher Ken Wilber’s 1991 memoir of the same name, this first feature from Sebastian Siegel (who also wrote the script) transforms a real-life tragedy — the death of Wilber’s wife, Treya, from metastatic cancer — into an insufferable movie. Encumbered by the recurring narration of both partners (played by Stuart Townsend and Mena Suvari), the story winds through their five-year journey from first meeting to a deathbed scene so interminable it virtually demands its own trailer.

That initial encounter, though, is a doozy, showing the pair so mutually overwhelmed they can’t wait to rush home and start journaling. Most of the action unfolds post-diagnosis, as the two travel from San Francisco to Lake Tahoe to Germany in search of ever-more-grueling fringe therapies. There’s some depression, and a little fighting, all of it wrapped in a smushy blanket of dreams and portents, floaty music and florid dialogue.

“I’m just not crazy about his writing,” Treya’s mother (Frances Fisher) opines about her future son-in-law, proving there’s no project Fisher can’t elevate, however briefly. Equally welcome is Mariel Hemingway’s batty turn as an energy therapist who believes that all cancer is caused by a virus and, in common with the movie’s general tone, that Wilber’s amazingness is inarguable.

“I have a body, but I am not my body,” the guru himself gently reminds his suffering spouse. I would have whacked him right in the aphorism.

Grace and Grit
Rated R for harsh words and hubristic psychobabble. Running time: 1 hour 51 minutes. In theaters and available to rent or buy on Apple TV, FandangoNow and other streaming platforms and pay TV operators.