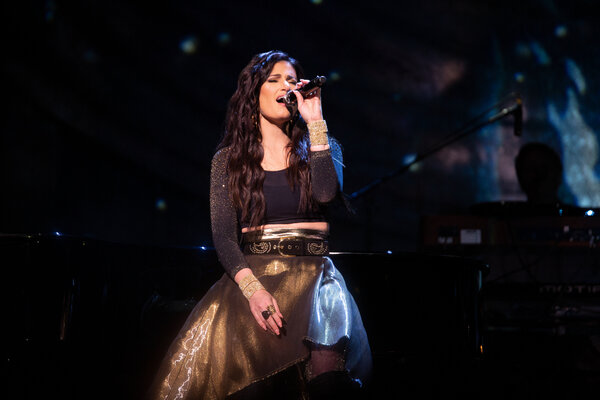 Our expanding catalog of glossy celebrity bio-documentaries gains a new entry in “Idina Menzel: Which Way to the Stage?,” which trails its subject on a national tour in 2018. The concerts saw Menzel performing musical highlights from throughout her career, including a medley of show-tunes, original pop numbers and singalongs.

The director, Anne McCabe, uses these songs as springboards into Menzel’s past, and in between lengthy performance sequences — renditions of “Take Me or Leave Me” from “Rent,” “Defying Gravity” from “Wicked” and “Let It Go” from “Frozen” go on and on — the film races through an overview of career achievements. We are frequently reminded that Menzel’s tour ends at Madison Square Garden; in an effort to graft an arc onto this timeline, the documentary insists that playing the arena is Menzel’s lifelong dream.

There is little dramatic tension or psychological depth to this cinematic biography, and even in sentimental moments, McCabe fails to elicit an emotional response from her subject or the audience. When, for example, the film touches on the sudden death of the “Rent” creator Jonathan Larson, McCabe includes an impersonal remark from Menzel, cuts to an archival clip of a different cast member and then moves on.

Bursts of authenticity occur in scenes concerning Menzel’s preteen son, particularly when Menzel explores how shifting from mom time to work time can bring about both guilt and a measure of relief. We already know that Menzel can belt to the back row; a richer profile would have coaxed out a more intimate voice.

Idina Menzel: Which Way to the Stage?
Not rated. Running time: 1 hour 33 minutes. Watch on Disney+.