Holly Willoughby and Phillip Schofield were given a McDonald’s Breakfast masterclass on This Morning today. The presenting duo were shown by John Torode how to make a Sausage McMuffin and instead of sitting back they headed into the kitchen to cook up the dish themselves. However, the pair got a fright when they noticed a tea towel had caught fire and immediately tried to alert John who was oblivious.

As the This Morning hosts followed the chef’s instructions, Holly noticed a tea towel had caught fire on the stove behind John.

Holly and Phillip continued to shout, “look behind you,” but the chef remained obvious due to the video link delay. 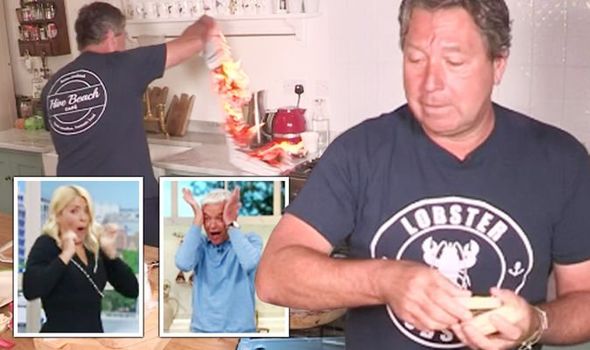 When he finally realised, the MasterChef host calmly turned round, thanked the pair and moved the burning tea towel to the sink.

“John Torode gave the most actual representation of me trying to cook. A fire, the smoke alarm going off and just general absolute chaos. @thismorning #ThisMorning,” another added.

A third shared: “#ThisMorning John Torode showing us how to make a McMuffin…And burn the house down.”