This Morning’s Phillip Schofield and Holly Willoughby spoke to Anna Maxwell Martin who plays DCS Patricia Carmichael in Line of Duty. It came after Sunday night’s episode of the BBC crime drama which saw Superintendent Ted Hastings’ (played by Adrian Dunbar) boss take charge of AC-12 and those watching at home were left confused as to whether Carmichael is bent after she halted some of Hastings’ questions and moved the interview away from discussing OCG movements. The actress, however, remained tight-lipped and merely laughed her way through the presenters’ questioning. But at one point, Phillip was keen to put Carmichael tapping her pen four times during DCU Joanne Davidson’s (Kelly Macdonald) interview with Anna and the actress said he was being “aggressive”.

“Don’t claim to me you can’t remember this moment!” Phillip began. “So when you’re in the interview -”

“So when you’re in the interview room and you tap the pen four times, let’s have a look at this moment,” the presenter explained and a clip was played out to viewers.

“I think I was just bored,” the actress said and argued she was tapping her pen whilst thinking: “‘What am I saying next?’”

Holly added: “You are such a brilliant actress, you could be pulling the wool over our eyes.” 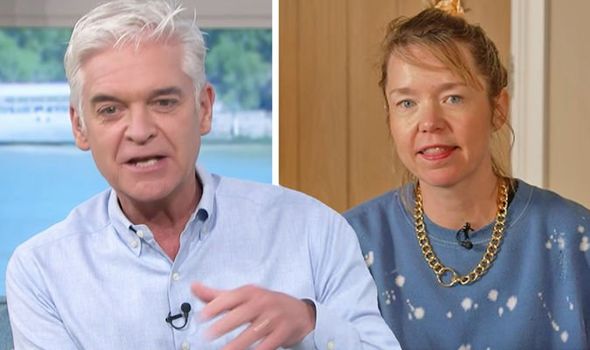 This Morning airs weekdays at 10am on ITV.